I went back to the same spot for the third evening in a row – my last for a while, I think. I went this time to release the garter snake I had caught and kept. I guess I also went to try my luck. Could I do three trips in a row?

Nope. I’ll write about the repeat worm snake out in Jersey later, but this streak ended on Wednesday. I tried the log, and there was nothing under it but centipedes and slugs. Maybe it was the rain; I imagine it could have sent all the snakes out to catch the worms and slugs that had come to the surface, since there were none waiting for me under any logs.

The dead snake was gone too, or I couldn’t spot it without Jen. I had a mind to photograph it, to make some record of its end besides my notes and our memories, but it wasn’t there. I walked in circles, spirals, and repetitive curls across the grass, stopping at each stick to see what it wasn’t.

It did feel good to release the little garter I had kept for two days. I’m not sure why I lost interest in it. I think garter snakes might grow too big for what I’m shooting for these days. I’ve been getting into little snakes you can support on as many night crawlers as you can find in ten minutes per week, and a growing garter snake can down a lot of worms. I guess I’ll stick to the brown snakes and red bellies for now.
Posted by Bernard Brown at 6:41 PM No comments: 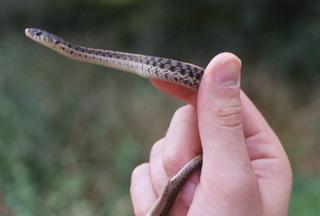 I went back out the next evening. This time Jen came with me. I parked the car, we got out of it, and I walked to the same log. I crouched down, and rolled it over. There, in almost the same spot, was a garter snake that looked almost identical to the one I had found the day before, maybe with darker checkers. I grabbed it, and after a stunned moment (it was probably asleep) it came to life in my hand, squirming, defecating, and puffing up to flash that amazing pale blue/green. I got some pictures of it looking all angry and tough (though that blue/green color didn't come through well), which is so cute in a twelve inch garter snake. I took a moment to brag – two trips in a row to find snakes under the first log.

I set the little guy down in the tall grass, and we tried a few more logs. We saw the same shed skin as I had se

en on Monday, but about five logs later we found the second snake of the night, a little brown snake. It too puffed up to look all tough, and struck at my other hand like a little viper. I think brown snakes are much prettier than garter snakes. They are never strikingly beautiful, but they are gentle, subtly patterned little gems, with delicate little lines drawn on soft fawn skin. Since most of the brown snakes I see are flattened on asphalt, it was a pleasure to hold a live one in my hand. [This is a West Philly brown snake.]

We continued on, laughing at the bullfrog rumbling away proudly from the weeds along the creek. We watched a raccoon and one of her babies climb a tree. The baby, maybe half grown, got up the tree okay, but took some stretching to reach the branch its mother had chosen as the perfect haven from the two humans staring at it. I collected some night crawlers to feed Shorty, and we headed back to the car. Jen wanted to know why we drive all the way out to the pine barrens to look for snakes when they’re so easy to find in the neighborhood, and I had no good answer.

What put a sour note on the end of the trip was the huge, dead garter snake Jen saw in the mowed grass. Jen’s always better at spotting herps than I am. This is a point of both pride and embarrassment for me. On the one hand, how cool is it to have a fiancée who is good at finding critters? On the other, I’m the one who’s been looking for snakes his whole life, and here she’s the one always pointing them out on the herping trips I insist we take. I sort of wish she hadn’t seen this one.

The snake was pretty fresh – not totally stiff and not stinking. Maybe she had been killed that morning. She had big squished spots along her body, and her guts were hanging out of her mouth. This was not the work of little kids with sticks or a feral cat; something big ran over this snake. Maybe it was a lawnmower, maybe it was one of the maintenance vehicles, maybe it was some punk on an ATV, I don’t know; the result’s the same.

I think she was one of the big garters I’ve been trying to catch. She was about thirty inches long and as thick as the base of my thumb. I’m pretty sure she was a she, and it’s hard to tell, but I think (or I want to think – it gives me more reason to be pissed off) she was gravid.

Snakes get killed all the time, and that population of garter snakes can absorb the occasional crushing death. God knows how many are carried off by birds of prey and snatched up by raccoons and cats. Still, I am still sad and angry, and I feel even more justified in taking the occasional snake to be part of my own collection, temporarily or permanently. If I had caught her the night before and held her till she gave birth, she wouldn’t have been there for a tire to crush the life out of her, and she and her litter would have lived happily ever after, at least until they died their own deaths in the jaws of raccoons or under tires.
Posted by Bernard Brown at 6:35 PM 2 comments:

One night last week I felt the powerful urge to get in my car and look for a garter snake. This was not a general urge to go herping (I get that a lot), but a specific urge to look for one garter snake in particular. I had been feeling the urge to go out and roll logs since five o’clock when I was working through a backlog of emails I’d been putting off since Thursday. I don’t know why I didn’t head out sooner, but I put off the call of the garter snake in favor of dinner and personal emails at home till 8:30, at which point I just couldn’t take it anymore. I ran out the door, took the steps to the sidewalk in threes, and jumped in my car.

I knew the log I wanted to roll. I had seen a large garter snake next to it this weekend, but I had not been able to catch her. I say ‘her’ because I’m pretty sure she was pregnant – I had almost caught her, and her back third was fat and a little soft in my hand as she slipped away into a crack in the log. She was totally inaccessible at that point unless I felt like sawing the log apart, which seemed like way too much trouble to go through for a snake I figured I could just come back and catch later.

I sprang out of my car and nearly skipped across the field to where the log is. I’m using these words like ‘sprang’ and ‘skipped,’ really cornball verbs for a twenty-eight year old bureaucrat, but that’s how I felt: elated and free, like a boy running towards a moonwalk or a swimming pool. Anyhow, I got to the log, dropped my backpack, and crouched into position. I lifted with one arm and reflexively grabbed with the other.

It was not the garter snake I was looking for, but it was a garter snake: twelve inches instead of thirty, and not pregnant in the least. The one I caught was probably in its third year and maybe sexually mature, maybe not. It had a classic garter snake pattern with a twist. There were the dark checkers on a tan background and a beige stripe down the back – what you would paint if someone asked you to paint a garter snake, but like several of the garters I’ve caught in southeast Pennsylvania it’s got this almost freakily bright blue-green coloration in between its scales that really blows me away.

I kept it. I stuck it in the bag that I had meant for its pregnant neighbor, tied a quick knot, and after looking under one more log, I headed back to the car and drove home. How’s that for a successful herping trip? I looked for all of two minutes, and I found a snake under fifty percent of the logs I tried. If you count the shed skin under the second log, I hit one-hundred percent. I probably find snakes once every fifteen hours of looking, so I bettered my snake-per-minute average by a factor of about twenty-five thousand.
Posted by Bernard Brown at 8:08 PM No comments: