I do love three day weekends. I think I enjoy them more in the spring, when there’s more to find, but last weekend I took advantage of the extra time off and made two scouting trips.

On Sunday I took my morning run in a section of Cobbs Creek that I don’t know very well. I rode out on my bicycle and rode up and down the bike path as well, and I found a couple old fields with some potential for the spring. Both are old ball fields that have been left to the weeds. Both have their share of dumped debris, and although of course I don’t condone illegally dumping trash in city parks, I took the time to better-distribute some dumped boards. The only problem was the dogs. I was heading back up to the bike trail when two pit-bull type dogs ran after me barking their heads off. They didn’t get closer than thirty yards or so, but still picked up a couple rocks just in case. I don’t think they’re residents of the park; most likely someone was walking his dogs off leash. Either way, I think it’ll be important to keep my eyes open for dogs down there in the future, and I’ll keep my cultivator (or snake hook, or potato rake) in hand.

Dogs are relatively simple to handle; angry land owners and the state police are something else.

Scott and I planned an all-day scouting trip out in our western suburbs, and I had spent a lot of time (probably way too much) studying satellite images for sites to check out on the ground. I was looking for two types of terrain: wetlands, accessible rights of way, and abandoned buildings. Wetlands are pretty easy to spot on satellite images, as are rights of way. Abandoned buildings are trickier, so I paid attention to buildings on land that looked overgrown with weeds or young forest. Well, it turns out I was wrong about the buildings; they were all occupied and also thoroughly posted with ‘No Trespassing’ signs. The rights of way turned out to be inaccessible for the most part – fences and more ‘No Trespassing’ signs.

The wetlands were much more of a hit. We only drove by three of them. One of those featured a lovely mix of wet marsh, flooded forest, and a small creek, and it looked accessible, showing potential for oodles of amphibians and turtles. One was all open marsh but it looks like we’ll have to talk to the neighboring land owners to get access. One was absolutely mind blowing in size, at least a few square miles, but similarly difficult to access, with hardly any roads even cutting through it or near it (in itself a good sign – not much road mortality).

The last that I’ll mention (actually the first we visited) was also wonderful, and we had permission to scout it. Here are some photos (it’s clear that winter wetlands are not the most attractive landscapes out there). 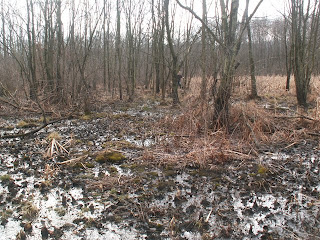 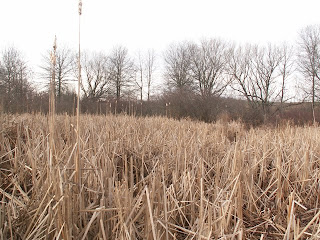 It’s got strong potential for at least five species of turtles I can think of, hordes of frogs, and a handful of snakes, not to mention some interesting salamander species you don’t see every day (such as red salamanders, Pseudotriton ruber, and four-toed salamanders, Hemidactylium scutatum).

I’ll blame Scott for not reminding me to bring hip waders. Should I have thought of them myself? Maybe, but Scott still should have stopped me, when I got in his car, to say “Hey dude, you should probably get your hip waders.” My hiking boots started out their lives water proof, but over the last few years have become more and more porous. I think some of the seams are giving way, so they’ll hold off the water for a minute or two, but then it all starts to trickle in. About an hour in, my socks were pretty wet, but not quite soaked; I hadn’t quite reached the sloshing point. On our way out there was a thigh-deep brook we had to cross, however, and we made a strong effort to bridge it with downed branches we found on either side. The bridge looked pretty good, and I figured I wouldn’t have any trouble taking the one step I needed to push off into a jump to the other bank. I was wrong, and a burst of snaps and cracks plunged me into the icy water. I scrambled right back out, but it was too late for my boots.

We figured that was the worst of our trip, but apparently permission to scout the property wasn’t enough. We also needed permission to park across the street. At the time we parked Scotts car, that seemed absurd. We chose a graveled pull-off that looked like public land, something for county vehicles or left over from earlier road work. There were no ‘No Trespassing’ signs posted, and we figured it was a find place to leave the car. When we crossed the road, however, we saw a man in a beat up, blue compact pickup truck who had parked us in. He had also strung yellow ‘caution’ tape across the entrance to the parking spot and had even tied some to one of Scott’s wiper blades.

Apparently we had parked on his land, and he was not happy about it. At first we thought he was inebriated, but he might just have been extremely flustered. His anger undermined by his appearance – red faced with a red with white polka dots conductor’s cap on. He looked like the town drunk from a Western.

Our irate host demanded to see our driver’s licenses and threatened to call the state police. I’ll fast forward through most of the next five minutes of ‘conversation’, but the key is that I refused to show him my ID and told him to go ahead and call the police. I didn’t want to find out two weeks later that I was being accused of some outlandish crime and preferred to have it settled right there and then, especially since I was convinced we had done nothing wrong.

The state police officer showed up after twenty minutes or so (I took the opportunity to empty the water from my boots and wring out my socks), and things went swimmingly from there. Our friend (Scott has named him Beardy McAngrypants) drove off, and the cop turned to us with a grin that showed that the officer thought about as much of him as we did. We pointed out the complete lack of ‘No Trespassing’ signs, and we explained to the officer that we had permission to be on the land we’d been scouting. He let us go with a warning to not park right there again, and we continued on our tour, a little delayed but incredibly relieved.

Posted by Bernard Brown at 4:34 AM No comments: