I’ve caught a few dozen pregnant northern brown snakes (Storeria d. dekayi) over the past couple months. Most I immediately let go, but I held onto one really pretty one from the Mt. Moriah Cemetery. I decided to take her home for pictures, and then I decided to keep her a little longer to see her offspring (see the July 3 post).

The idea had been to take some pictures of the babies and then let them go. I’d never done this before, but it’s a fun little natural history project. Of course if you want to try this yourself, pick a common species like brown snakes and house the female in a container that will be escape proof for the babies. Baby brown snakes are as thin as rice grains, so ordinary air holes will be like open windows to them.

I missed the big event while I was on the road for work. I had started thinking the snake was never going to give birth, but Jen called me (I was in Warren, PA) on my cell phone Thursday (6/27/06) morning to tell me that there were fourteen itty-bitty (three to four inches long) snakes crawling around the enclosure. She moved them into a holding container to wait for my return. When I got home Thursday night I took some pictures.

My plan was to release them Saturday when I released the mom back where I found her. Jen, though, had grown attached to the little guys. So, the plan now is to keep them through the fall and the winter and then release them in the spring when they’re a little bigger. That way they don't have to face predators until they're a little bigger, and they don't have to worry about the hazards of hibernation until next year.

How did the plans change? I made the monster mistake of commenting that they would be highly unlikely to survive in the wild. I calculated their survival odds at about one out of thirty-two. Jen was horrified that they all would most likely perish in the next year, and the low odds of their survival made it pretty easy to decide that even if some didn’t make it, we could probably do better over the next seven or eight months than could on their own in the wild.

If I hadn’t caught the mother and brought her home, all those little snakes would be trying to make it in the weeds of the cemetery right now, and the odds are all of them would either be eaten by something else (spiders, centipedes, opossums, birds, etc.) or would freeze or starve to death in the winter. The same would have been their fate if I had let them all go this weekend with their mother. Now, though, I have brought them into our household, and we feel like we have some responsibility to help them beat the odds.

Here they are. That’s a soda bottle cap/water dish for perspective. They really are adorable. 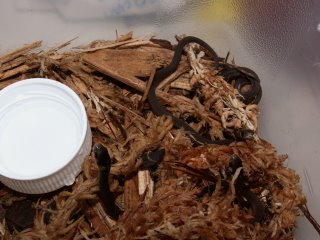 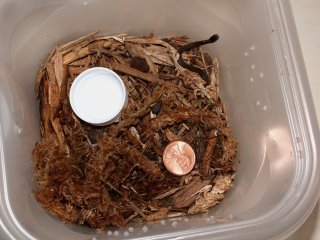 Here’s the mom. See the crease of skin on her side? That used to be all filled out with babies. 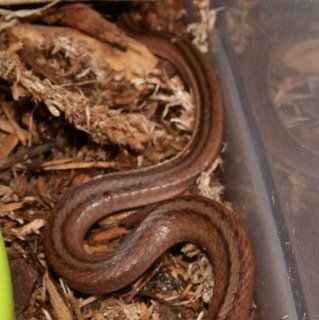 Posted by Bernard Brown at 12:47 PM No comments: