The east side’s plots are mostly grown over with grass, and these cemetery meadows do not look entirely inappropriate. The taller headstones are shrouded by the grass and are visible by only their top few inches until you draw close. From a few feet away the grass works like a curtain, and the marker stands alone. It’s not the effect the now-deceased or their family anticipated when they chose the plot, but at least it’s dignified. 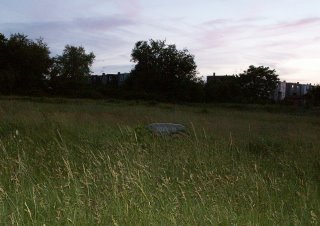 The west side has a few meadow sections, but too many are dominated by the bigger weeds. Small trees of heaven jut out from behind and between headstones, knocking them off their bases another centimeter each year. Some plots are invisible under young sassafras and vines. Obelisks are consumed by rose bushes that once decorated their feet. Even the open areas look like savannah, the headstones almost incidental. 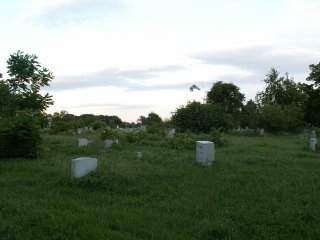 Jen found our first two brown snakes (Storeria dekayi dekayi) in the west section of the cemetery under a board alongside a path that runs through a thicket of Japanese knotweed. 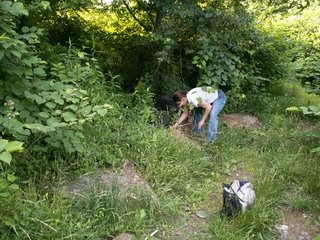 Japanese knotweed is a horribly invasive exotic plant that grows in surging walls of green that choke out everything else. We had found redback salamanders (Plethodon cinereus) under these same boards and the neighboring tire piles at the beginning of the winter, and the ground had looked nothing like this – just knocked-over canes and mud. On Sunday (June 11) I could see no indication that there were people buried back in there until I rounded the corner and saw the step up to the Wright plot. 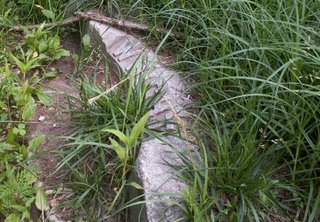 The snakes were together under this board. 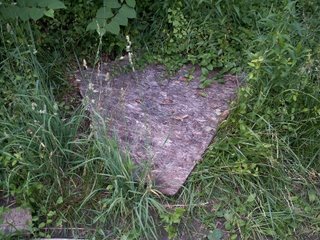 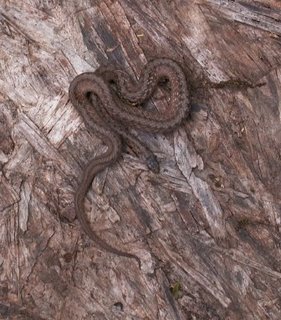 This is the prettier one, though Jen claims to notice no major difference between the brown snakes I say are pretty and the ones that I think are dull. 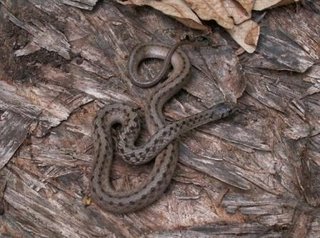 Here’s the third snake, one that I found (Jen’s really been outclassing me lately) under a log in this meadow-plot on the other side of the cemetery. Click on the picture and admire this little gem. 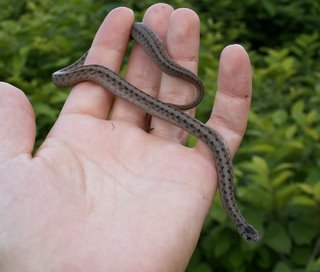 See how the black spots sharply define the edge of that smooth, pale gray back against the rougher, browner flanks? There’s something really beautiful in that subtle contrast, right?

Their rear ends’ plumpness is beyond dispute, even if you deny that some are more beautiful than the others. Here’s one of the first two in Jen’s hand. 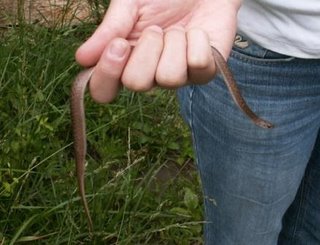 I’m pretty sure we’re mostly finding gravid (pregnant) females. I’m curious if we’ll find many in another month or so when they’ll all have dropped their litters.

By the way (see the comment below), the Mount Moriah Cemetery has a website at which you can learn more about its history: http://mountmoriahcemetery.org/

The weather Sunday evening was partly cloudy and the temperature falling through the high to mid 60s.

Seeing a box turtle (Terrepene carolina) crossing a busy road is like watching a four year old juggle knives. “You could get yourself killed!” I want to yell. I wish I could to do something to drill into that tiny turtle brain just how dangerous it is to step onto the asphalt, but turtles are stupid. If they’ve got what seems to them a good reason to make it to the other side of the road, they’ll try to cross it. It’s up to us to help them across safely.

At some level they understand that they have no business being on blacktop. I’ve never seen a box turtle walking down the street, or even crossing at an angle; they almost always seem to go straight across, taking the shortest path possible. They don’t take their time. They get their heads out in front and walk pretty quickly.

Of course pretty quickly for box turtles is pretty slow. That’s the problem: they’re box turtles. Even fast little mammals get run over by cars – chipmunks, squirrels, and cats and dogs – and all these animals can run really fast when scared. A scared box turtle doesn’t run; it just pulls in its legs and head and hides.

The first turtle I found on Saturday (June 10) morning in eastern Cumberland County was crossing the end of a very quiet exurban street, and the old girl was moving at all possible box turtle speed. I doubt she was in much danger, but after I had taken my photos I dropped her on the side of the road she had been heading for.

Here she is from the car: 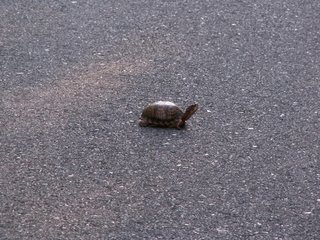 I walked around her for a closer shot with better lighting: 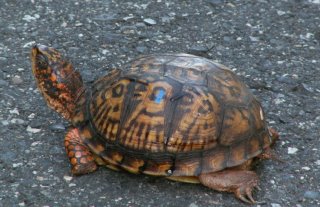 She wouldn’t come out for her close-up, but she still looked pretty cute. 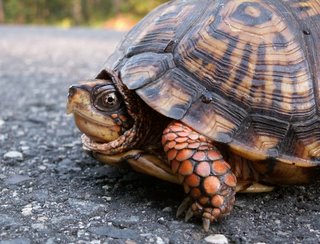 That blue mark there on her left is not natural. It looks like she’s involved in a study in which each turtle gets a unique pattern of marks on its shell. I let the NJ Herp Atlas folks know about her, and I figure they’ll notify whoever’s doing research down there.

The second turtle I found was on a busier road, and he was almost all the way across when I spotted him. He had apparently been spooked, and had everything pulled in except the tip of his nose. The nose disappeared too when I got close. 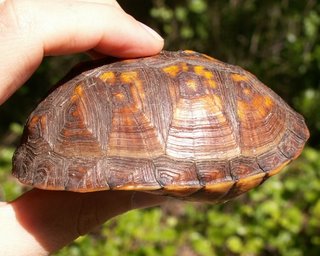 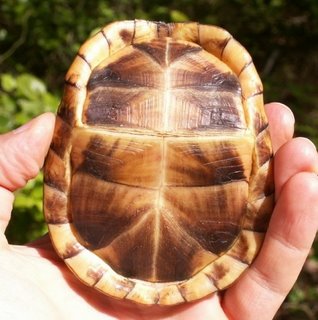 I was out road cruising – my first time. The idea behind road cruising is to cover as much ground as possible to find the animals when they happen to be crossing the road. This sounds ridiculous, I know, but apparently it’s one of the best ways to find snakes in the Pine Barrens. It’s also really popular out West and in Florida.

I gave road cruising a shot on Saturday, and I’ll try it again this summer in the evening when rattlesnakes (Crotalus horridus) and ratsnakes (Elaphe obsoleta) should be up and moving, but I don’t enjoy it. I don’t enjoy driving, no matter the purpose; I’d rather be hiking around looking for critters than slouched in the driver’s seat listening to the radio and watching the road.

Some people go road cruising on their bicycles. They take mountain bikes and deck them out with three hundred dollar lighting systems. I’m all for that – you burn a lot more calories that way and save on gasoline.

However I need to be able to afford another bike (my current bike is a road bike) and the lights, so I’m about six hundred dollars away from cruising the sand roads of the Barrens on anything but the car.

Before I hopped on the AC Expressway for home, I stopped by a dump site in western Atlantic County. Other herpers frequent the site, as was clear from these carefully arranged boards that had been heaped in a disorganized pile my last time out there. 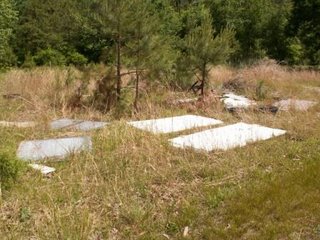 Kyle calls these “racer boards,” and sure enough, the third one hid this black beauty (Coluber constrictor constrictor). 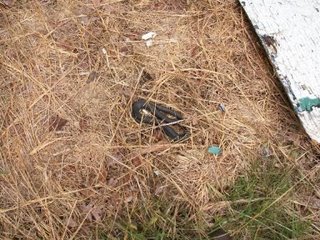 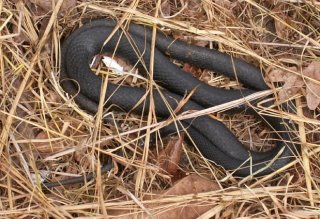 We both froze while I decided what to do. I could take some pictures first or I could grab for the racer. I really like en situ shots, certainly more than shots of squirmy, biting racers at arms length, so I snapped two quick photos and then reached. By the time my hand was anywhere near it, the snake was off. I didn’t dive for it, so those two pictures were all I got.

A lot of people who herp New Jersey think little of black racers. They’re common, hard to catch (there’s a reason they call them racers), and bite hard when you catch them.

I like racers. I recognize their faults, but I don’t think there are many snakes more beautiful than a coal-black racer with that white chin.

I'll end with the turkeys. I saw a lot of them, which I find interesting because they were re-introduced to New Jersey a few decades ago after being wiped out. 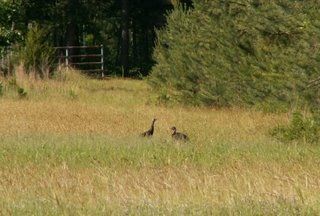 The temperature rose from the high 50s to the mid 60s while I was out Saturday morning. It was partly cloudy.