It wasn’t exactly the other day, but the 'way out there' part sure was true; I had a meeting starting in Dubois, Clearfield County, at 10 in the morning on May 3rd, and I managed to get out of my hotel room around 6:30am to spend some time in a nearby .

The bear might have been saying to me “why don’t you run,” since I sure didn’t have any gun, I didn't even have my cultivator, but I don’t speak bear. I didn’t even know it was a bear that I was hearing at first.

You’d think a bear would make some kind of deep growling or roaring noise, but what I heard as I was walking through the field sounded more like a pig – a kind of grating, squealing noise. If I were the bear I'd be a little embarrassed. I figured it was probably raccoons or possums tussling back in the woods, and I didn’t think much of it.

A lot of these fields in State Game Lands are cut up by long hedge rows, and this long field had several of them running crosswise. I rounded the end of one of them a few minutes after I’d heard all that squealing, and I looked across the field to see a black bear looking right back at me.

The sun was just burning through the morning mist, and the air had a bright, hazy quality to it that stretched that instant out, so I recall it now as a long, mutual contemplation, even though it probably only lasted one second.

I thought to get my camera out as the bear was dashing off into the woods, and of course I missed capturing that absolutely amazing image. The woods were close, and no matter how big and clumsy bears look, they can haul ass when they want to.

That bear’s speed made very clear to me that bears do not make a habit of attacking people. I’ve seen black bears before, and I know they almost never attack humans, but man, if they wanted to eat people we’d have no chance at all of getting away from them.

I had been planning to head just where that bear had headed, and even knowing all I knew about how timid black bears are, and even though it had acted terrified of me, I decided to head in the opposite direction.

So, I headed up along a recently clear-cut slope looking for something to look under. I tried some branches and stumps and found nothing. I wanted to head deeper into the field to try more of the stumps and branches, but the field was thick with brambles, and I was hoping for better ground to cover further up the hill.

I found some nice looking loose rocks near the top of the ridge, but nothing under them but dirt. My time was winding down if I wanted to get back, shower, and make the meeting on time, so I decided to try one more pile of logs before giving up. 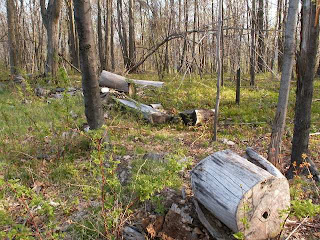 That’s where I found this skink. I wasn’t sure what species at first, but I suspected coal skink (Eumeces anthracinus). You don't see coal skinks too often, not because they're rare, but because they live in the middle of nowhere, which closest to us means up in the mountains of central PA. I submitted the capture record with the photos to the PA Herp Atlas Project, and I was relieved that they confirmed the ID. 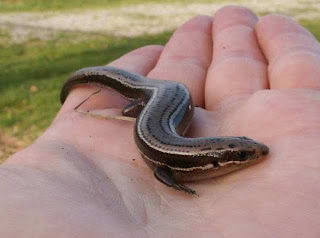 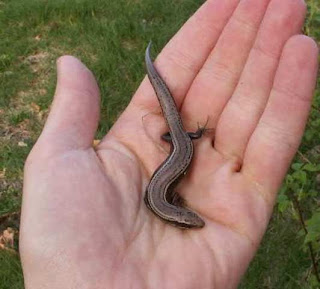 The temperature was around 55 degrees.

Posted by Bernard Brown at 5:12 PM No comments: