So, when we pulled up under this bridge over a tributary of the Pearl River, and we saw this river, with water that was murky enough to have scared me away at the beginning of the trip but a hell of a lot clearer than the last few rivers we'd looked at, we jumped in. 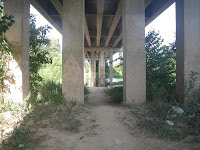 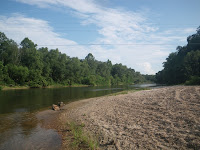 Good thing we did. I'll start with another musk turtle species, this one razor-backed (Sternotherus carinatus). Here are a few that we found. I thought these were just the cutest things on the planet. Dig that sharp keel that gives them their name: 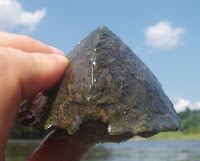 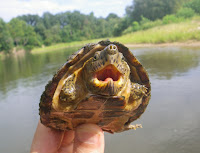 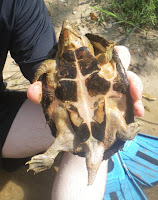 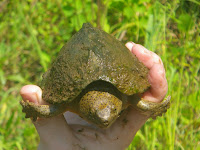 We got excited early on by something that maybe, just maybe from far away could have been a map turtle... 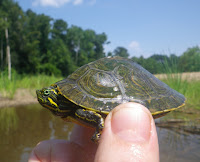 Nope, another river cooter (Pseudemys concinna). It was a cute little tyke, though.

We finally found maybe the coolest turtle on the planet (G. oculifera). I love it when animals look like something dreamed up by a second-grader with a box of crayons. 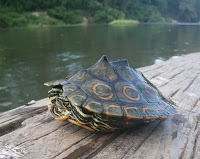 We saw some turtles drop off a log - nothing unusual there. They included some little guys as well as a larger turtle. Here's one of the little guys, a male Pearl River map turtle (G. pearli). 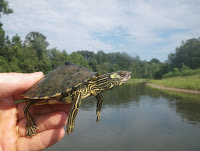 (Here's another one from a different spot on the river - same as the photo leading off the post. Note the tail - definitely a male.) 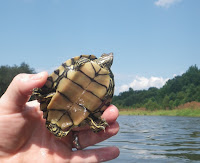 I was intrigued by that big one, though. We searched up and down the submerged tree of which that emergent log was just one part, but we found no large turtle. I turned upstream a little, focusing on some slack water along a cutout bank. The bottom of the river kept on getting deeper, and I kept on following it. I knew I was on to something when I found a large submerged log down there. I came up for air, dove back down, and sure enough saw the leaf edge of a shell tucked underneath. I shot to the surface, turtle in one hand and lungs in near-rebellion for lack of air.

Here's the star of the river, a female G. pearli in all her beefy, shell-crushing glory. Keep in mind that she and the male above are both adults of the same species. Now that's sexual dimorphism. 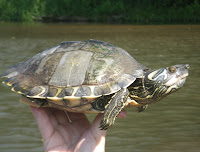 Look at that face! It's like she's from another planet.

One last shot before letting her back in the river to find that log again. 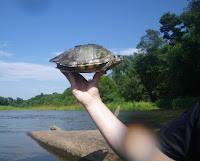 Now that was a fun day of turtling. The only thing that detracted from the fun of jumping in a river and finding amazing turtles on a beautiful day were all the snags and brush piles we didn't search because of these trot lines: 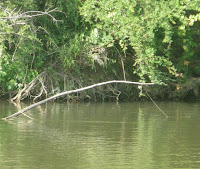 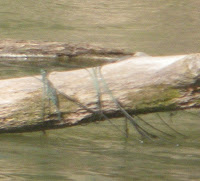 Trot lines are fishing lines anchored between stationary objects (like between two otherwise turtlicious snags) and strung with a series of enormous hooks descending from the main line. The idea is that you bait them, leave them overnight or for the day while you sunbath on the shore, and you come back, pull in a mess of catfish, and put the lines back in your boat to take them home. The problem is that people forget about them or just leave them in there indefinitely, where they keep hooking fish, drowning turtles and shorebirds, and posing a hazard to boaters and turtlers. I was only a little afraid of alligators, but I was genuinely scared of getting snagged by one of these hooks. It sucked to see turtles jump off a log, to know that we could probably find them in there if we tried, but that we weren't going to be feeling around all those rusty old hooks underwater. Scott and I had a simultaneous heart attack at one point when we were walking side-by-side back downstream, and we hit, at the same time, a line some moron had strung across the current of the river, like the fisherman would be the only person ever traversing that stretch of river. We very gingerly backed off it and headed for shore to go around it.


Curious about what map turtles eat? Here's a shot of a pile of clam shells, I think all Corbicula species. This is a genus of Asian clams that is sort of taking over the rivers of our continent, likely to the detriment of our 300+ species of native mussels. Map turtles, particularly the hefty female broad-heads, eat mussels, but they also apparently dig the clams, so it's a wash for them, even if it's a small biodiversity crisis otherwise. 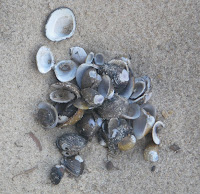 I'll close with a concession to people who dig invertebrates (in particular Ted of Beetles in the Bush, who identified the species), a common shore tiger beetle that was dancing around in large numbers on the sand under the bridge (nice to get a descriptive name like that - common? Yep. by the shore? Yep.):