Sometime in early August Scott told me he'd have a week off in early September and that he'd like to take a herping road trip to the North Carolina.


I had never taken a herping vacation before. I know that sounds a little strange given how obsessed I am with herping, but Jen, a cooperative and skilled herper, still isn't quite enthusiastic enough to sign up for a whole vacation of nothing-but, and generally I've reserved days off for longer vacations as a couple (our 2007 trip to Mexico is an example) and family visit trips. Of course a lot of these have included some herping time, but never as the focus of the trip.

Early September isn't the best time to go herping anywhere - the fall mini-peak in reptile and amphibian activity starts towards the end of the month as all the babies hatch out (or metamorphosize), everyone starts traveling back to hibernation sites, and the temps cool down enough for critters to be active or close to the surface during the day.

Still, a week of herping in even sub-optimal weather beats almost anything else, and I signed on. Josh also had a week off, so he came down from New York as the third member on the trip. On a nice Sunday afternoon we hopped in Caroline's Rav 4 and drove down the coast, through the Delmarva Peninsula, over to the Virginia mainland, and then not too much farther down into North Carolina.

I'll be splitting the account of the trip into two posts on this blog - one covering the Lake Phelps area of North Carolina and the second on the Croatan area.

Lake Phelps and the Pocosin Lakes (To assign proper credit, I need to be clear that almost all the photos in this post were taken by Josh Shatsky and Scott McWilliams):

Perhaps the biggest problem with vacation herping is that you often don't know the terrain ahead of time. With any first trip to a place you spend about half the time learning your way around, and thus only half the time actually doing any quality herping. None of us were truly experts on herping the coastal areas of North Carolina, but Scott had been down to the Lake Phelps area more than once and had had some luck there, meaning that compared to other possibly destinations, we'd have have to spend less time learning our way around and more time herping.

What does the area look like? I admit I was a little surprised. Scott described it as a mix of wetlands and farmland with lots of nice canals and drainage ditches, but I was still expecting a lot of forest, in particular the flat pinewoods that are so characteristic of the Southern coastal plain.

In reality the 'natural' landscapes there were dominated by something called "pocosin," which can refer to something that looks like an overgrown field with shrubs and stubby trees that goes from soggy to flooded. You think you're looking at an overgrown pasture, but then you walk out in it and feel the water seeping into your socks. This pocosin (like a lot of wetlands) sometimes burns when it's dried out, and apparently these fires can burn deep in to the peaty soil, producing at least some of the lakes that are the biggest water features on the landscape - lakes with great names like Pungo and Mattamuskeet. Lake Phelps looks about the same, a wide, round, shallow lake, even if it sounds less exotic than the others. Here's a shot of Lake Pungo. Thrilling, ain't it? 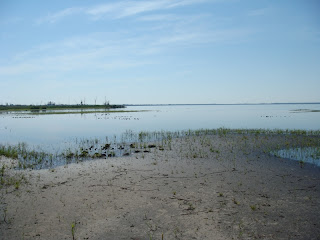 Much of the lakes and the surrounding pocosin falls in a series of National Wildlife Refuges, which might sound nice for herping at first, but in practice meant that we got a chilly reception from some staff who must have thought we were there to poach, which then left us feeling pretty wary about walking around and searching for critters.
Our bread and butter method for the trip was road cruising, starting an hour or two before dusk and keeping at it until we were tired and resigned to finding nothing else but DORs. Road cruising isn't my favorite herping technique, but in hot, humid weather, when most herps are only active at night, it might be the best we've got.

Road cruising is often best with different types of habitat on either side of the road - the idea is that critters traveling from one area to another need to get across the road to do so (this is also why roads at the edge of wetlands can be such ecological disasters; we're taking advantage of an awful situation). Almost every road in that area of North Carolina runs along a deep drainage/irrigation canal, promising at least frogs, turtles, and aquatic snakes such as water snakes (Nerodia species) and cottonmouths (Agkistrodon piscivorus).

The road cruising wasn't terribly successful. As I mentioned above, early September isn't good herping time, although that can change if you get really lucky with a big rainstorm. We were praying for rain in a big way, but for the first few days of the trip our prayers went unanswered.

On our first morning we swung by a site where Scott had laid out some dumped boards on an earlier trip. As so often happens, someone had cleaned up the boards (one man's treasure is another man's trash), but we did find a couple pretty box turtles (Terrepene carolina) soaking in puddles at the edge of the site. 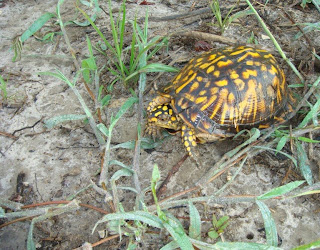 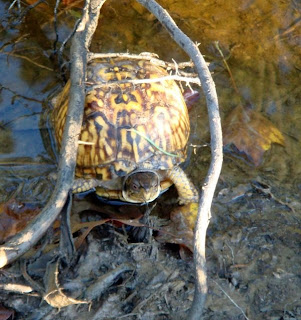 Box turtles are always a welcome find, but we didn't find a heck of a lot in the rest of our other daytime herping. I'll sum up the highlights:

Skinks (Eumeces species) were running around here and there, and got out of our way too fast for us under more than one board. Here is one up on a tree: 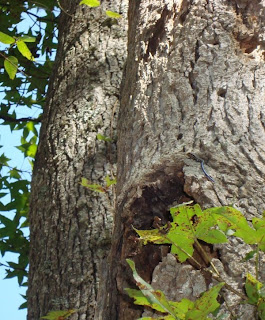 We saw a few of these familiar faces (Painted turtles - Chrysemys picta) crossing the road. 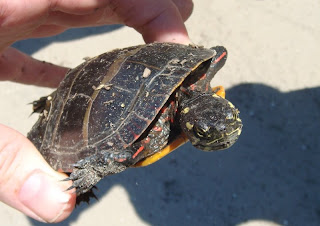 This guy looked really cute from the right angle... 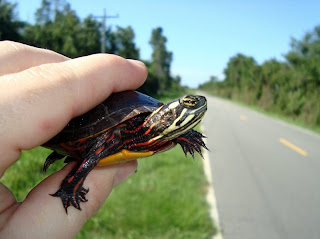 ...but when we flipped him over we saw that he was missing a quarter of his plastron. I shudder to think of what he survived: 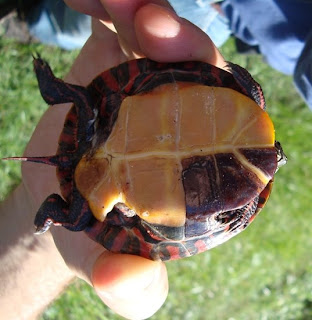 On a little walk around Lake Pungow discovered something very interesting but a little disturbing, that my actions are actually controlled by a small gray tree frog (Hyla species - either chrysoscelis or versicolor - they're hard to tell apart) that rides around on my backpack. 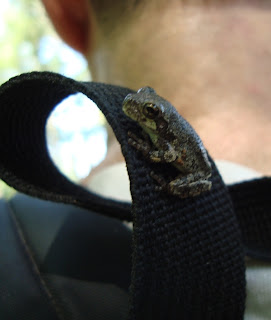 The most depressing things we found during the day (and we found a lot of depressing DORs) were the dead canebrake rattlers (Crotalus horridus). These are more or less the Southern form of our our beloved timber rattlers, and we sure were hoping to find some of them alive, but all we saw were dead ones. One was getting devoured by vultures (which in retrospect would have been a really cool photo), but this one was really fresh late in the afternoon, its head and neck apparently having been run over but not the rest of it, but still retaining enough reflex to writhe around slowly and rattle a little when touched.

When we stopped to look at it, a man who lived across the street came over to ask what we were doing. We had a pleasant conversation, in which he swore that we could find oodles of them crossing the dirt roads in late afternoon at the National Wildlife Refuge next door. He also asked us if we wouldn't mind tossing the dead one out into one of the fields in the refuge. We agreed, and by the time we tossed it out into the field it had stopped moving completely. 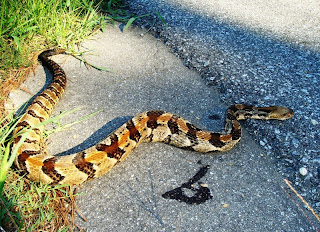 We saw more than one dead black racer (the southern subspecies, so Coluber constrictor priapus - a snake with one of the funniest scientific names ever, named after what you might be giggling about). We found this live youngster crossing a road: 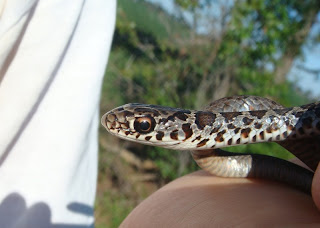 On another afternoon, getting out a little early before proper evening road cruising, we found possibly the coolest herp of the whole trip, a beautiful little baby hognose snake (Heterodon platyrhinos). 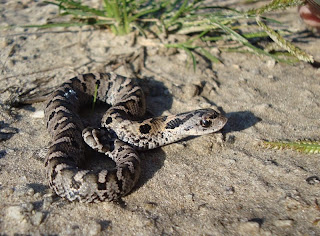 The little tyke put on the full hognose snake performance. For act one it flattened its head to look big and imposing: 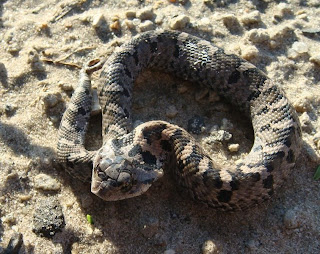 For act two it flipped over and started writhing around as if in mortal agony: 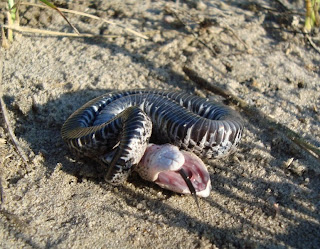 Then for its final act, it held still in its belly-up position, working to convince us it was dead: 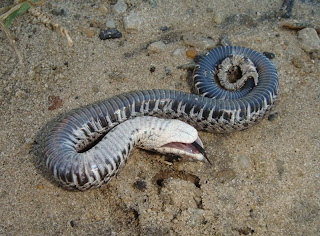 As for live critters, I nearly busted out laughing when we slammed on the brakes, jumped out all helter skelter, and then discovered (to Scott and Josh's chagrin) that we'd gotten that excited for this little brown snake (Storeria dekayi), who looked a lot like the dozens I'd been finding back home in West Philly: 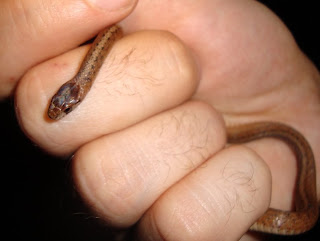 Heres a live toad we pulled off the road. It looks like a Fowler's toad (Bufo fowleri) but it was actually a southern toad (Bufo terrestris), and you might notice the prominent little ridges on its head between the eyes - "cranial bosses" - to use the technical term: 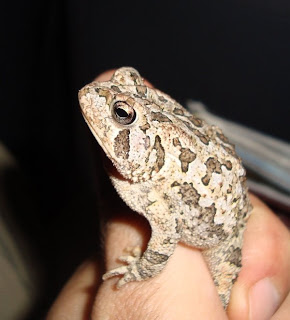 Here's a live baby banded water snake (N. fasciata) we found at dusk, with a penny in one shot for scale: 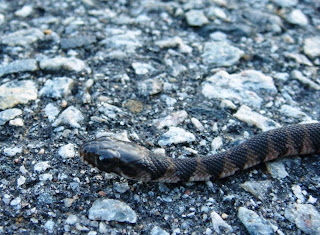 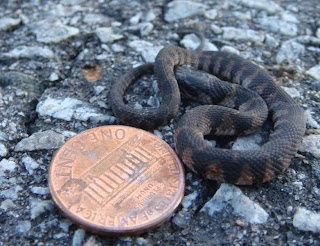 Here's a ribbon snake (Thamnophis sauritus) blurry but alive (I forgot to mention we found these dead too): 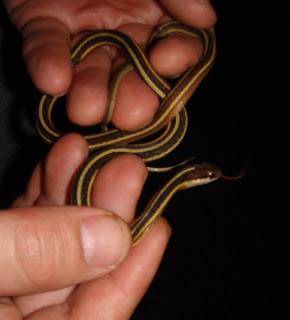 ...and its cousin a garter snake (Thamnophis sirtalis): 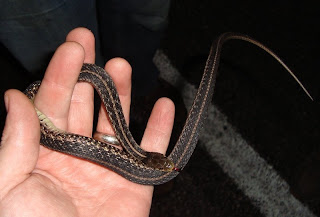 Almost as cute as the hognose snake was a baby corn snake (Pantherophis guttatus). At first we thought it was a baby greenish rat snake (the two closely related species look very much alike as babies), since in the light of our headlamps it looked less red, more gray-toned. I remember being a little unsure of the rat snake ID at the time, but it was only when I looked at these photos that it was obvious to me from the head pattern and coloration it really was a corn snake. 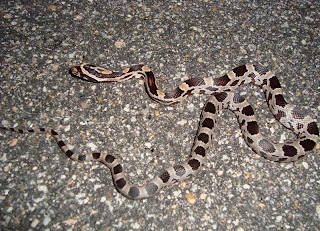 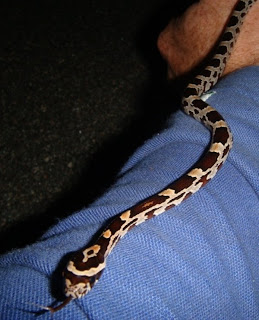 Most snakes run away from you. This one almost seemed like it wanted to play. 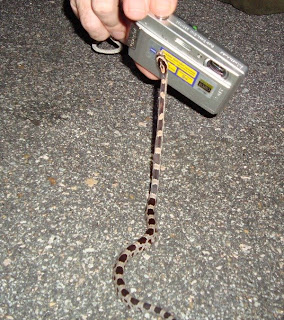 And that was about it for the evenings. After a few days we decided that with the mediocre luck we were having around the pocosin lakes, it was best to head south, where I'll pick up in the next post.

I'll leave with a cute, weird looking little frog I flipped together with a ground skink (Scincella lateralis) on our way out of town. The frog is called a narrowmouth toad (Gastrophryne carolinensis), and it's the first one I've ever found. 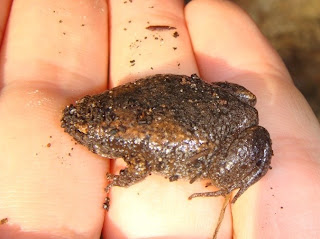