The hunt continues for the turtles of Cobbs Creek. Each time I’ve decided I’m not going to find them, I run into someone who assures me that they’re in there. It feels a little like the plot of a fantasy novel. The quest looks pointless, but the plucky hero runs into another unlikely wise man who encourages him to keep on questing.

The first wise man was Scott. I had spent a few hours by that point walking around in hip waders north of City Line, where a snapper (Chelydra serpentina) had been spotted by a reader of this blog. I found a lovely little northern water snake (Nerodia sipedon – around 4:00pm on August 18th, with overcast skies and temps in the high 60s) north of City Line, but no turtles. 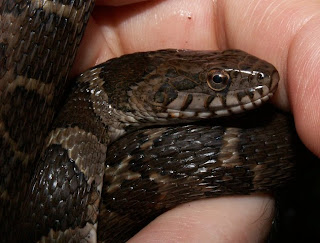 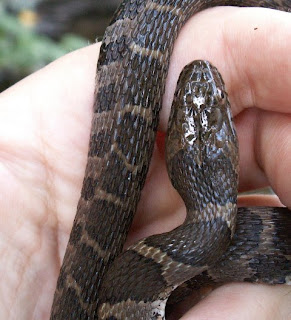 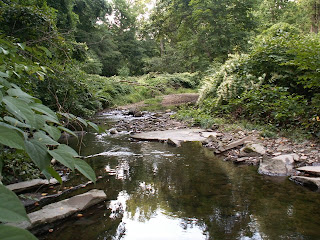 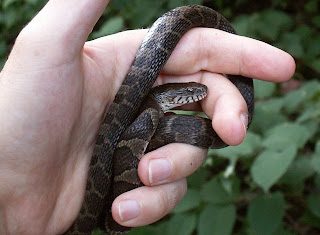 I called Scott to talk strategy, and he told me that back in high school he had pulled a snapper out of Cobbs Creek near the bridge. Scott’s sage words of advice? “Snappers can live anywhere. There’s probably a snapper in your toilet.”

I spent another hour or so walking the edge of the creek around with my handy polarized sunglasses on. I saw bullfrogs (Rana catesbeiana), several kinds of fish, but no turtles.

On the way back to my car, I ran into a man, a teenager, and a dog. The huge, burly dog looked like an , and it sported one of those brutal-looking collars with the metal prongs that jut inwards at an angle into the dog’s neck. The man was also large and burly, and he was dressed more for hunting than for a walk in the park, with boots and a camouflage vest. The third member of the party was his nephew, a teenage boy who might have been the second coming of Steve Urkle. He carried a small stack of Magic cards, and he looked uncomfortably out of place both in the woods and with his super-tough, ultra-masculine uncle and dog.

The man saw my net and asked what I was catching. We then proceeded to have a lovely conversation about the herpetefauna of the park. He had grown up nearby, and as a boy he had caught garter snakes, lots of frogs, and (of course), lots of turtles. He recommended the deep pools around the bridge.

Sunday (October 7th) Jen and I ran over to Cobbs Creek to take a few habitat pictures for an article on redback salamanders (Plethodon cinereus). Three boys on bicycles asked me if I was a photographer and gave me a warning. “There are snakes here.” I looked at them with new interest, and we started talking about the snakes. One of the boys doggedly insisted there are water moccasins in the creek, but I insisted just as doggedly that they were harmless northern water snakes. I asked them about the frogs; we could all agree on bullfrogs, although the boys claim to have seen toads (Bufo species), which was especially interesting to me because I’ve always wondered why there aren’t toads back there.

Finally I brought up the topic of turtles. “You guys see any turtles in the creek?” Of course they saw turtles! They held up their hands to show the sizes of the turtles they’d seen. One had brought one home a turtle the size of a salad plate, another had seen turtles the size of a silver dollar. One even claimed to have seen one the size of large snapper, judging by how he held his arms out.

These boys were in fourth and second grade, and although eight and ten year old boys are often the best source of information about local herps, they are also prone to exaggeration. Still, they seemed to be telling the truth. There were no grins, no uncertain glances back and forth; they just told me matter-of-factly about the turtles they saw. I asked them to take me to where they saw the turtles, and they took me to a couple “lakes” upstream. What they call lakes are pools in the creek, in fact pools I’d suspected as snapper homes.

My unsettling conclusion is that I need to go in there with my mask and snorkel. There are few bodies of water in which I am less eager to immerse myself, but I’m not sure there’s another way to find the snappers. Other turtles bask above water and spend a lot of the rest of their time swimming near the surface. Snappers, however, hang out at the bottom and bury themselves in the sand and mud at the bottom. Sometimes they bask by floating at the surface, but they usually just take a breath here and there by just barely sticking their noses above water. They inhale, and then they dive again.

Of course with temperatures falling, this is a quest I might not conclude until the spring, but wish me luck.

Posted by Bernard Brown at 7:46 PM No comments: