I’ve been thinking about that garter snake (Thamnophis s. sirtalis) we found last weekend, the one that we pulled out of the pond. I did what I should have done last week and looked up the normal seasonal activity for garter snakes, and I found that they’re active later into the season than most snakes.

More interesting to me, though, was that they sometimes hibernate submerged in water. The obvious question is how do they breath all winter if they’re under water? The answer is that they don’t have to, apparently they can get enough oxygen and get rid of enough carbon dioxide production through their skin to keep themselves alive.

In some ways that is less remarkable than it sounds. Snake metabolisms, and thus oxygen use and carbon dioxide production, slow down with the cold. Down in the 30s or 40s they’re not using very much oxygen or producing much carbon dioxide. Snakes also have a lot of skin relative to their mass thanks to their long, stretched-out shapes.

Still, I’m impressed. I’ve had it so firmly in my head that vertebrates with lungs breath air and those without lungs live in water and use gills that this fact about garter snake aquatic hibernation blows my mind.

I’ve had a few of these revelations over the past few years: you know all those redback salamanders (Plethodon cinereus) I find? They, and all their plethodontid relatives are also known as lungless salamanders. They get all the oxygen they need and get rid of all their carbon dioxide through their skin. How do all those water turtles survive under the ice in the winter? They also can get by submerged in water. They ‘breath’ by pulling water into the mouth and into cloaca and exchanging gasses that way.

I’ll close with some garter snake photos from when my digital camera was broken. I had been looking for milksnakes (Lampropeltis t. triangulum) in Roxborough, and a garter snake crawled directly into the side of my foot, as if surprised to find me standing there (http://phillyherping.blogspot.com/2006_09_24_phillyherping_archive.html).

Here’s a photo of the little guy, along with a couple of the street on which according to the locals (seen at the edge of the photo of the snake), garter snakes are really common. In case you were wondering, that's my trusty steed in the foreground of the second photo. 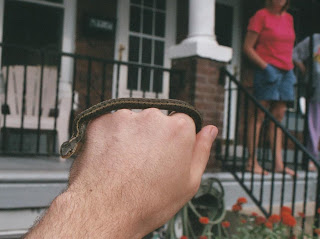 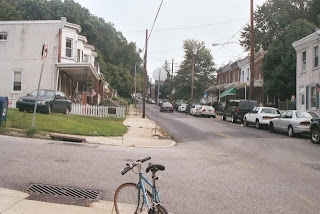 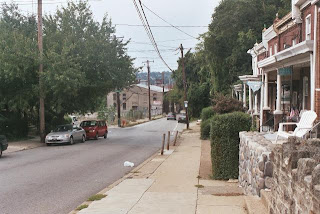 Here’s a photo of another a few feet away that didn’t make it to the sidewalk. 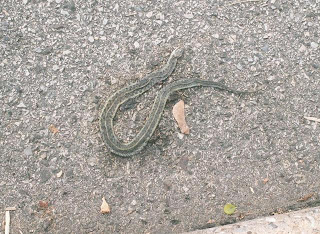 Posted by Bernard Brown at 1:20 PM No comments: