Tuesday morning I headed out of the house smelling kind of like a pumpkin pie. I had dropped by the Grid offices Monday, where a grateful local soap maker had recently dropped off a variety box. This was a fortuitous coincidence, since I had just run out of soap and soap is the kind of thing I keep forgetting to get (I forget about it as soon as I'm out of the shower) leaving me with the mini soaps scavenged from hotels and meant for house guests. The downside was that it was oatmeal spice, particularly heavy on the nutmeg. As I walked around an enormous vacant plot after work I kept catching a whiff of nutmeg and wondering 'what the heck is...? Oh right, it's me.' 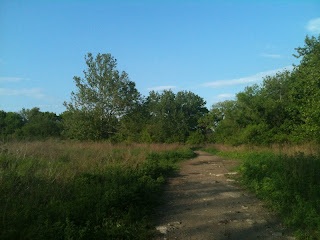 The lot had come from a tip from another herper, that a nonherper had found a baby black rat snake (Pantherophis obsoleta) there a few years ago. Now, readers of this blog know of my black rat snake infatuation (dig my profile photo), so the thought of a black rat snake within the borders of Philadelphia is enough to draw me anywhere.

This spot looked great, though with enough homeless encampments and detritus of unsavory activity to limit my explorations until I can come back with a herping buddy.

I did flip a few of the usual urban snake suspects. One chunk of concrete hit three of the garters (Thamnophis sirtalis) and at least one of the browns (Storeria dekayi). Here are a couple in hand (brown on the left, garter on the right). 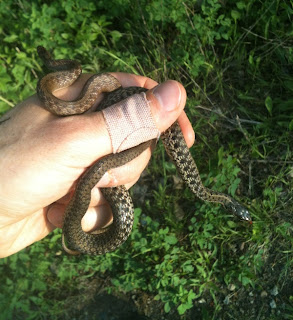 Both made sure to liberally douse my hand with feces, uric acid, and musk. I no longer smell like nutmeg.
Posted by Bernard Brown at 6:00 PM No comments: 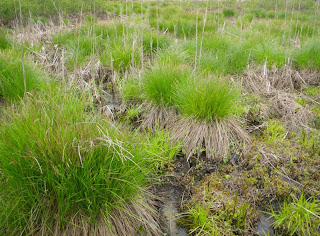 The day I had to go herping last weekend was Saturday. The weather wasn't perfect - cool and cloudy, but that was the day (and I've had luck with cool and cloudy before), so Magnolia and I slogged out into a sedge marsh to see what we could find. 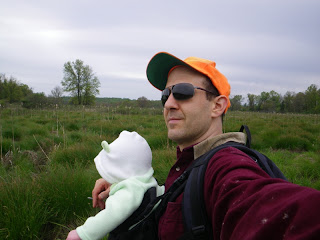 I checked in on some tadpoles. There seem to be fewer of them than before, but the ones left are bigger; I suppose the birds and garter snakes (Thamnophis sirtalis) have been picking them off, and others might have been washed downhill into the nearby wet meadow. 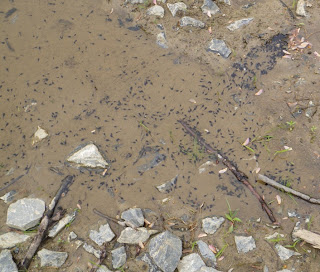 Otherwise we heard a few hardy spring peepers (Pseudacris crucifer). I wrote an article for Grid (check out page 36: http://www.gridphilly.com/digital-edition/may-2012-37.html) about peepers and other PA frogs. The article had to be bumped back a month, and I was worried it would be a month too late for readers to actually hear peepers, but a hardy few are still out there.
Posted by Bernard Brown at 5:49 PM 1 comment: