I've had a fabulous couple of weeks of mountain herping. I'll be doing a couple posts over the next week about it (this is the first) and they might look kind of similar, but both are flat-out awesome (you can tell that I'm overwhelmed when my vocabulary shifts back to adolescent mode).

A couple weeks ago no one would go herping with me. Work is conveniently slow this time of year, so I had taken off on day with a good weather forecast and had sent the alert out to all my herping buddies. No one came through, so all by my lonesome I drove out to Forbidden Ridge (my new favorite place on Earth), the ridge where we've been watching some gravid female timber rattlers (Crotalus horridus) as they bask together and get ready to have their babies.

On this trip I wanted to try a new route to the spot, one that I thought would take me past other possible spots. In general I think our reliance on trails and roads can steer us away from interesting habitat that's a little less accessible. I saw good habitat on the maps and satellite images; so I decided to hack my way through it.

Of course there are good reasons to stick to trails and roads, namely that it takes twice as long to hack through rocky underbrush. You might think briars are the worst of it, and you'd be right, but rhododendron come in a close second for the prize of plant-most-likely-to-get-Billy-swearing. I wouldn't have expected that, except that rhododendron tends to grow in dense stif, unyielding thickets of branches that tend to zig-zag up. You alternate between stepping over and limbo bends under, and then you just have to put your head down and charge to make it the rest of the way. Do that for more than a mile and it'll wear you out.

So, I arrived at our spot tired, a little scratched and bruised, and in need of energizing herping triumph.

I should mention that the weather was PERFECT. It was a little on the cool side with temps in the mid 60s, and the sun was veiled but not completely blocked by a thin sheet of clouds. The result on the ground was shadows going in and out of focus along with a low but steady warmth on the skin from what sun was getting through. One of the most important things I've learned this year is that clear, sunny weather is not the optimal weather to observe basking herps. The animals love it, since they can stay exposed only briefly as they quickly heat up in the direct sun, but that means that any given critter is out in the open for only a short period of time before ducking back out of view. Herpers benefit more from weaker sun that keeps them in the open longer as they warm up more slowly.

Ready for pictures already? Cool. I'll start with a group of adults I saw basking on a boulder maybe thirty yards from what we consider the main gravid snake hangout. 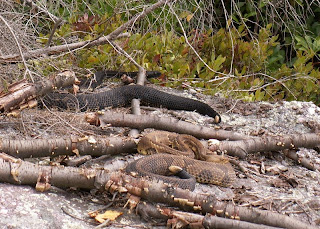 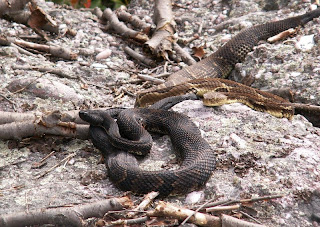 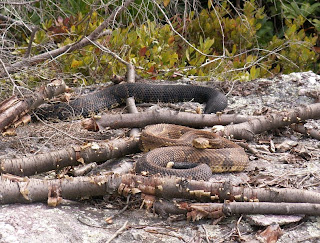 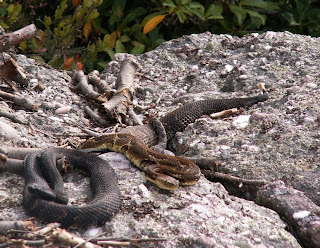 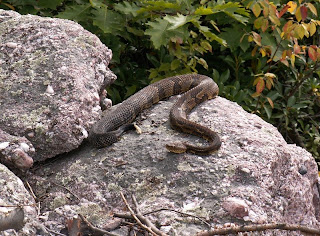 More exciting than the adults, though, was what I saw at the main spot, and then back at this boulder (which we call Simon's spot, for reasons that shouldn't require explanation) when I looked more closely: 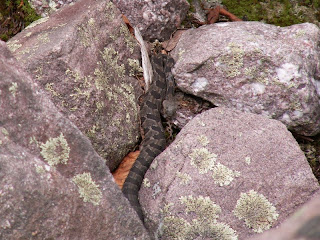 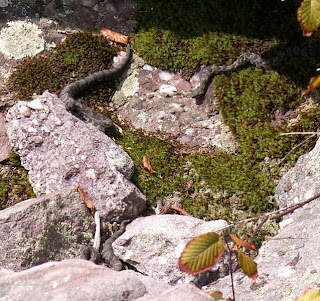 Babies! Aren't they the most adorable things you've ever seen? Cute as buttons, and unfortunately for me (but good for them) more skittish than their mothers. The big girls we've been able to approach without much fuss, but the kids dart back into the rocks the first glimpse they see of you. See them hanging out in the cracks? 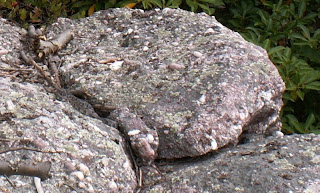 I pulled myself away and continued on a route up the mountain, checking some other spots. Here's a nice adult who let me get kind of close without budging or rattling. 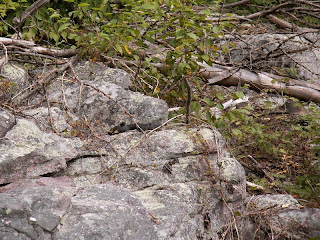 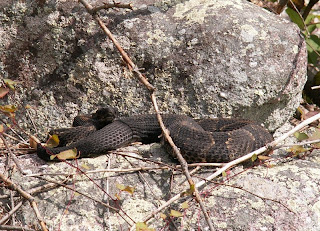 I was not the only large mammal on that mountainside in the past few days (bear poop): 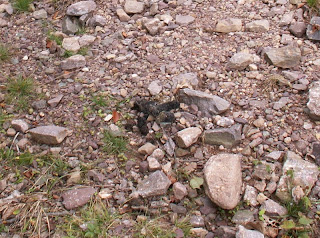 I think I'll close not with poop but with the most beautiful snake I've ever seen, back at Simon's spot when I was working my way back. Unfortunately it would not sit still, at least not where I could get a shot of it unobstructed and sitting in a pretty position. So, I'll post three sub-par pictures and ask you to trust me. 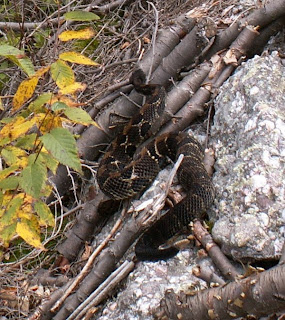 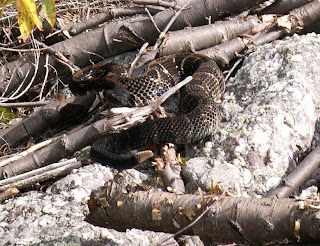 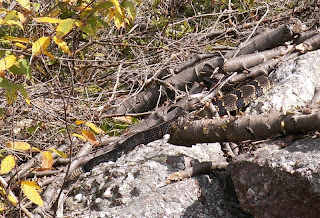 ...and then I dove back into the woods and hacked my way back to the car for an hour and a half.
Posted by Bernard Brown at 4:13 AM 1 comment:

The Delaware Valley Herpetological Society had a great meeting on Friday. Scott talked about venomous snake bite, covering everything from the basics of the biology of venom and its delivery, its effects on the victim, snakebite epidemiology, to some scary new problems like coral snake antivenin going out of production. 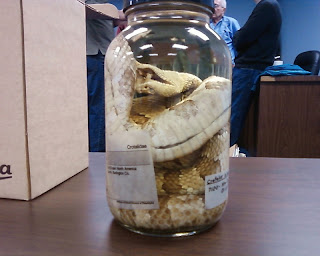 Posted by Bernard Brown at 3:54 AM No comments: