There's always been something a little spooky about herping an overgrown, decrepit cemetery like Mt. Moriah. It would be the perfect setting for a horror film. At dusk I could imagine peeking into a mausoleum and a skeleton hand grabbing me by the ankle and never letting go, or a flock of bats flying out of a tree stump and turning into vampires.

We've joked about more realistic encounters - that some day I'd find a body there to go with the used condoms and other dumped trash. Of course we say same the same thing about Cobbs Creek, not to mention oodles of rural trash dumps that draw our herping attention.

On Saturday the 15th the weather was a little better than expected with a sunny break after the rain and with temperatures up into the high 60s. I found nothing at Mill Creek Farm, but I figured it couldn't hurt to dash on down to Mt. Moriah to see what I could see.

When I got there, however, what I saw were a couple unmarked Crown Victorias and a truck with a body bag in it. I waved to the detectives and one of them came over and told me a body had been dumped in the cemetery, something that he said happens from time to time. He thought it was a murdered homeless man.

I mentioned this to Scott, and a week later he called me with a bizarre but depressing twist to the story. Scott is an emergency medicine resident over at the Hospital of the University of Pennsylvania. Scott mentioned the body I'd found to one of the other doctors at the HUP emergency department, and the doctor stopped him mid-story and gave it a new ending.

Apparently right after I left the cemetery the body took a breath. The truck drove the apparently alive man to the HUP ER where Scott's colleague took care of the man, who was suffering from severe hypothermia. Unfortunately the time out in the cold was too much for him, and he died later in the week in Intensive Care.

I'll encourage everyone reading this to make a donation to the Philadelphia Committee to End Homelessness, Project HOME, Bethesda Project, or another homeless charity of your choice in memory of our anonymous neighbor from the cemetery.

To strive for an up note at the end of this post, I'll close with a couple photos of a brown snake found on a different day a few yards from where I talked to the detective: 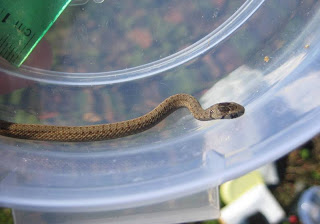 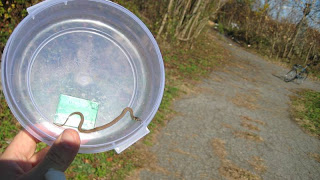 Posted by Bernard Brown at 6:40 PM No comments: