Instead I drove once more to the upper end of the Manayunk Canal Tow Path, parked, and again hacked through lots of clinging, thorny vegetation to find nothing, again.

For reference, I am looking specifically for a milk snake within the city limits of Philadelphia. I can find milk snakes elsewhere – for example I found two in Chester County this spring, but Philadelphia is a bigger challenge. I found one in 2005 in the Wissahickon, which is actually what inspired Phillyherping, but I have not been able to find another milk snake since in spite of a whole lot of time, effort, sweat, and, now that I think about it, a bum knee (my current knee flare-up followed two days in a row of herping, day one fruitlessly searching for milk snakes, day two on the timber rattler - Crotalus horridus - of a lifetime. Why blame the rattlers I did find when I can blame the milk snakes I didn't?).
Posted by Bernard Brown at 4:14 PM No comments:

I guess the only thing that will bring me back to New Jersey outside of early spring is the promise of ratsnakes (Pantherophis obsoleta), even though I don't ever seem to find any on these ratsnake-specific trips.

I would have gone somewhere in PA, to a hilly State Game Land I've been wanting to explore more, or to the mountains to check in on some rattlers, but my knee is still not itself (hope to have that fixed soon) and flat terrain seemed like the best idea.

So I went to a nice spot at the edge of the Pine Barrens where Chris has seen several very nice, very black (I like them really, really dark), black ratsnakes.

The usuals made their appearances, first in order of size the black racers (Coluber constrictor), in this case two snakes that were both preparing to shed, and so not at their prettiest. I got a photo of one under a board. It looked skinny as well as ugly, so I decided to just let it be and snap a quick shot without grabbing it:


The other one was sunning itself in high grass, and in spite of its opaque eye shields (a milky fluid gathers under the old layer of skin before a snake sheds, and this includes the clear scale over the eye, obscuring their vision) it slipped away before I could get a good photo.

I saw some fence lizards (Sceloporus undulatus hyacinthatus) and a Fowlers toad (Bufo fowleri) but got photos of neither. The five-lined skinks (Eumeces fasciatus) were out in full force. I think I saw four scampering around in the sun. The first one I found, though, was under a board, and when I lifted the board it went for the nearest cover it could see - my shoe: 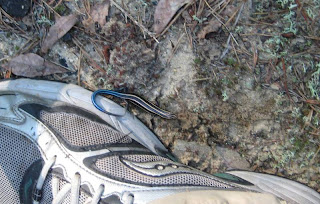 Here's another on a tree: 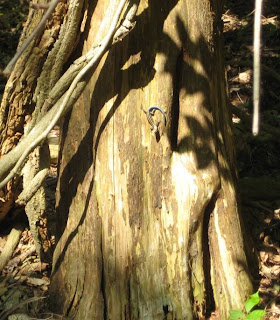 I sort of found a ratsnake. I had reached the end of my walking route there, feeling that old familiar feeling of regret at yet more time wasted in New Jersey, when I looked down to see a shed skin. Here it is pulled out of the weeds and on an old piece of wood: 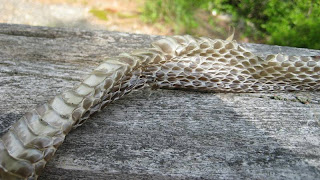 You can tell a lot from a shed snake skin in good condition. Shed skins end up stretched out and otherwise expanded compared to the original owner, but I could get a rough sense that this was a decent sized snake - at least three feet long, I guessed. The pattern remains a bit in shed skins, and this one was obviously solid and dark on the back and sides, so it that narrows it down to big, dark snakes: racers and ratsnakes, maybe a kingsnake, but I think some chain pattern would have shown through for a kingsnake. The shed had a little pattern on its belly - dark coloration bleeding in from the sides of the belly to obscure light coloration in the middle of the belly scales, which would rule out a solid-black-bellied racer: 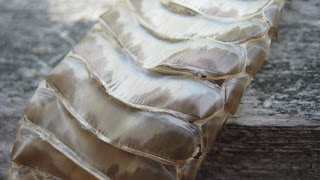 Another feature you can discern in a shed skin is the surface of the scales. Some snakes, such as racers, have smooth scales, while others have keeled scales, with a little ridge running from front to back through the middle of each scale. Black ratsnakes have such keels, which you can see if you look closely in this photo from three years ago: 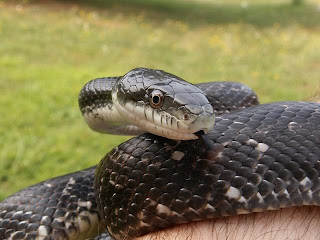 Now note the keels in the shed skin: 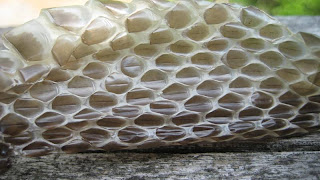 I had seen no live ratsnakes, but I found the skin somewhat satisfying. A ratsnake had been there.

At least the site is pretty, a little more pleasant to my eyes and feet than the sandier heart of the Barrens. Here the trees are well spaced with a carpet of grass and moss, making it easy to walk without getting snagged by briars. Maybe the canopy is relatively closed, but I enjoy the cool shade, as opposed to that dry heat radiating off the sand and leatherleaf in scrubbier sections of the Barrens. 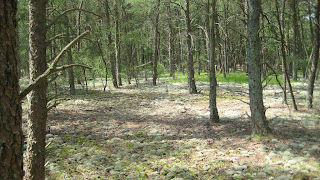 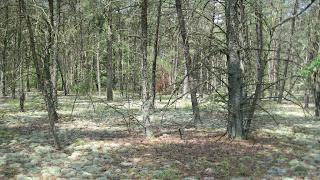 I should probably have closed with those landscape shots, but I there is one more thing that can bring me back to New Jersey - blueberries! I don't care how much you like whatever special blueberries you can get at your favorite farmstand, nothing beats the real, wild deal. In this case both low bush and high bush (seen here) were just coming into season, and I ate as many as I could reach: 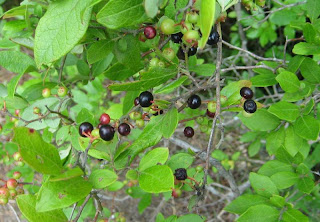 After those two gaping, ferocious gartersnakes (Thamnophis sirtalis) shots from the last post, I wanted to post a more peaceful, gentle garter image. I found this one under a mattress with a brown snake, and the garter seemed to sit there asleep while I snapped a photo - click on the thumbnail for the full size photo, and please excuse another awkward image thanks to Blogger's weird uploading orientations.

Posted by Bernard Brown at 8:15 AM No comments: