On Thursday Scott sent me a pretty harsh email about the weather forecast. I'll spare you the specifics, we were both swearing blue streaks after watching the forecast for Sunday change from high 50s and sunny to high 40s and partly cloudy. High 50s and sunny means spotted turtles (Clemmys guttata – our original target species for Sunday) would be out sunning themselves, eating, getting their swerve on, and otherwise having a good time. In the high 40s with sun here and there, we might find a few basking, but then the sun might spend a few hours behind the clouds and our turtles would decide to take the day off.

So, by Friday afternoon we had changed plans. Instead of a trip to a spotted turtle hot spot on Sunday, we'd scout wetlands on Saturday. Scott, who had the choice of working that weekend or next weekend, picked a Sunday all-day shift and a Saturday morning shift. Jen and I started the day with a trip to a sporting goods store to get her a pair of hip waders, and around noon picked Scott up outside HUP (it wasn't hard to spot the guy in scrubs and hip waders walking around ).

We headed west into to visit a gigantic, privately-owned wetland basin. Here are a couple pictures. 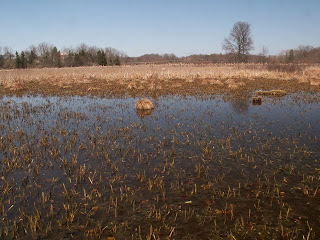 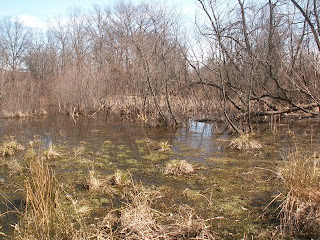 The non-herpers out there are probably not impressed by all the water and mud, but this is the kind of thing we live for. The wetlands are wonderful for frogs, turtles, and our semi-aquatic snakes, and then there are the corn fields and patches of forest – perfect territory for my beloved milk snakes (Lampropeltis triangulum), black rat snakes (Elaphe obsoleta), and box turtles (Terrepene ).

The property is accessible by invitation only. Last week I was delighted and honored to get access. We had seen the marsh from I-76 and thought we had some idea of what it looked like, but we were still blown away as we drove in over the access road and parked the car. We're so used to herping small patches of this kind of marsh habitat here and there; looking at thousands of acres of it, we didn't know where to start.

So we pulled on our waders and started wading around. This is a little cumbersome in deep muck. The mud sucks back on your foot with each step, and after almost three hours we were pretty tired (I'll emphasize that after three hours we had only covered a small portion of the marsh).

What did we do for three hours? We kept our eyes open for any turtles we might see. It was chilly (high of about 48 degrees) and windy, but the sun was out, giving us a small shot at seeing our chelonian friends. Scott saw one head, and I caught this young painted turtle (Chrysemys picta) in a pond on the property. 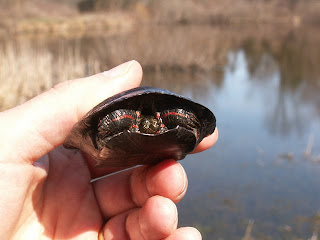 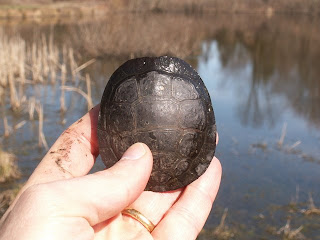 We also chased frogs around. The spring peeper (Pseudacris crucifer) choruses were almost deafening, and there were a few wood frogs (Rana sylvatica) mixed in there too (Jen also observed several wood frog egg masses). A few times I could swear I heard other species (maybe western chorus frogs – Pseudacris triseriata – and maybe, maybe cricket frogs – Acris crepitans), but it's hard to pick softer calls out of a full choir of peepers.

The frustrating part about all calling frogs, but peepers especially, is that they're really hard to see, let alone catch. We're not the only things looking for frogs, and they do their best to hide themselves from herons, foxes, and snakes while making themselves known to their peers and crushes. Peepers are about the size of a thumbnail, and during the day call from inside bushes, clumps of grass or weeds, or somewhere else you can't see them. As soon as you get close to them they clam up. If you really want to see peepers, you hunt them at night when they come a little more out in the open. That said, Jen managed the impressive task of catching this little guy (see, they really do exist!). 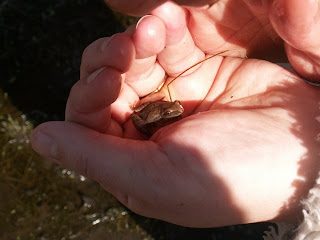 She also snapped a picture of this tadpole – probably a bull frog (Rana catesbeiana) or green frog (Rana clamitans melanota). 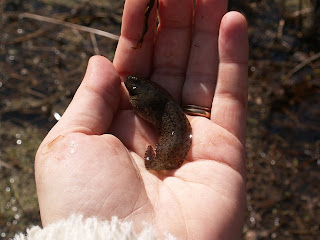 We look forward to visiting this marsh a few more times through the season to experience its full herpetological diversity. That's a pretty dry way of saying we can't wait to go back. Here’s to a great spring.

Posted by Bernard Brown at 4:29 AM No comments: