I know it's not fun for the snapping turtle (Chelydra serpentina) to be grabbed by the tail and hauled into a boat (to be clear I had one hand on the tail, the other under the plastron), but damn if it isn't fun for the human!

And what made it worse for the turtle was that a moment before it had been mounting another turtle. At least I think that was what it was doing. Shoshi and I were canoeing down a creek in a marsh, preparing for a nature walk Scott and I would be leading the next day by catching critters for the show-and-tell, and I was keeping my eyes open for a nice snapping turtle. So I was thrilled to see what looked like two of them, one climbing on top of the other. To be honest it's hard to tell what one snapper is doing to another in that situation. They could have been fighting. A female could have been rejecting a male (about the same as fighting), or she could have been more receptive.

By the time we cruised up to the turtles they had separated, and I was hopping out of the canoe into the shallow water and deeper mud. Shoshi, to her credit, was already questioning my judgment - "Billy, what are you doing?" "Billy, what are we going to do with it?" Of course I had not come up with answers to those questions, but better to give myself the extra moments to try; if the turtles got away and then I came up with a way to transport it back upstream and then think of a way to contain it for 24 hours I'd feel really stupid, no?

Grabbing a snapper in these situations is easier than you might think. While they're in the water they tend not to bite (the next day I patted one on the back in the water and it just sat there - kind of like a water tortoise), and you basically just get a good grip on the tail, get another hand in an un-bitable position (under the belly or gripping the shell right behind the head - the gutsiest grip there is) and hoist. So in second I had the turtle up and over the side of the canoe.

Placing it facing Shoshi probably wasn't the most thoughtful move. It hissed, snapped, and took a step or two towards her, even biting the end of the paddle she lowered to try to block it. 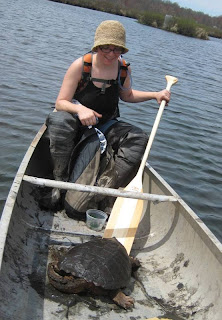 In all the action I didn't get many good photos. I now wish I'd snapped a shot of the turtle's inch-long claws, for example.

Shoshi and I had a very quick conversation in this position. The turtle was making it clear that it would not sit passively in the bottom of the canoe while we paddled around, and even now I can't figure out how we could have managed it without more equipment.

More on the nature walk and the other critters we detained for it in future posts...
Posted by Bernard Brown at 5:02 PM 1 comment: