My Philly milk snake (Lampropeltis triangulum) obsession reared its ugly, time-vacuuming head on Sunday (August 17th). Newly revived and as strong as ever, it vetoed alternative plans to hunt copperheads (Agkistrodon contortrix) in Chester County or turtles in Bucks County. I was compelled, instead, to return to Roxborough and hack my way through chest-high weeds and grass and look for cover to flip.

I made the most of it; it was a beautiful day and I rode out on my bicycle. I commute to work most days by bicycle, so the contrast of just sailing along MLK Drive with no traffic to dodge and no traffic lights to stop for was delicious. One other cycler did ask why I had a potato rake strapped to my bike, and I matter-of-factly explained that I had been looking for snakes that morning.

I don't have to tell you I found no snakes, but I did reorganize some old boards and flat rocks I found in piles here and there, stupid in that scouting and spreading out artificial cover is winter work, something you do when the weathers no good for catching anything anywhere, and when the vegetation is dead and has been beaten down a bit already by the weather.

Posted by Bernard Brown at 4:52 AM No comments:

They say it can take several tries to quit. Drug addicts often need several rounds of rehab and major life changes to break their habit. Smokers and alcoholics do fine for a while, feel great, are doing great, and then some unforeseen trigger catches them at a weak moment and they’re hooked again.
Last Sunday (August 10th) Scott and I were getting back into his car parked near the Manayunk Canal when he noticed some snake jerky next to the car. I had just tried to trap turtles for the second time that weekend with my new trap, and for the second time it had come up empty. Now that doesn’t mean much; for best results I should leave that thing in overnight and try different spots and baits, but I was still a little disappointed, not completely prepared for a shock to my emotional system.

Scott was on the phone with his wife and had just finished wrangling his toddler into the car seat when he looked down and emitted an intrigued grunt. I looked over, and he tapped his foot on the dried-up, many-times-squashed snake on the asphalt. I saw him lower his head a tad more and then cup the receiver on his cell phone (presumably still listening to his wife) and produce a slightly more excited grunt.

“What?” I said, “a brown snake?” Brown snakes (Storeria dekayi) are the most common road jerky I see in Philadelphia. Here’s a shot of brown snake jerky. 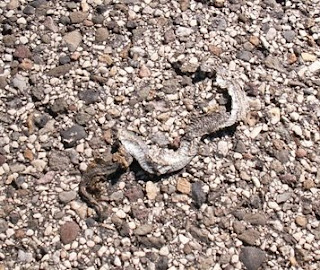 Scott bent down and held up something very different. Instead of the vaguely patterned beige of a brown snake on that stiff, two-dimensional corpse, I saw deep red blotches outlined with black on a dirty gray background. Scott had found a milksnake (Lampropeltis triangulum). 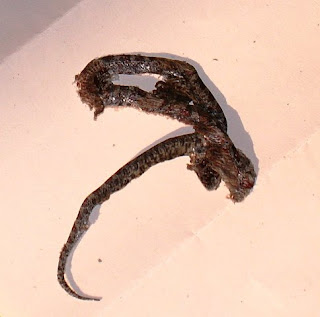 I’ve compared my herping impulses to an addiction before (and among my herping buddies I’m hardly unique in this). I’ve chosen to feed my general addiction with a steady diet of socially/ecologically constructive herping trips: some to local spots like the Manayunk Canal, and some farther away to Jersey and the mountains of Upstate PA.

I have chosen to fight what I consider to be more-harmful sub-addictions, in particular my obsession with finding milksnakes within the city limits of Philadelphia. In the spring of 2004 I found one gorgeous yearling milksnake under a completely ordinary rock on an otherwise undistinguished hillside in the Wissahickon, and I was hooked.

Of course I’m not saying I’m in as bad a shape as anyone who’s substance-addicted, but there are similarities. Over the past three years I’ve spent endless hours flipping rocks for milksnakes and finding nothing more remarkable than ringneck snakes (Diadophis punctatus – not that there’s anything wrong with a ringneck) and redback salamanders (Plethodon cinereus). I’ve hacked my way through many thorny miles of Wissahickon Valley hillsides when I could have been out in way-more productive environments or finding species of interest to our state conservation agencies.

This spring, after a few notably unproductive attempts (although they were good workouts) I resolved to quit the milksnake habit. I’ve put milksnakes out of mind, and instead I’ve gone on more turtle trips, more trips out to Chester County, and a few trips into Cobbs Creek when I would have otherwise been out in the Roxborough area.

This milksnake, however, this yearling, dead-for-a-week, flattened and preserved under hundreds of rolling tires, has whetted my appetite again. I’m now thinking of laying a board line or two in the area. I’m thinking of a trip next weekend to scout the area again and flip everything in sight.

I hope I can do something else productive while I fruitlessly search for another three years. Maybe I can combine this with another project. Maybe I’ll toss the turtle trap in the water and head onto land for the morning and see what results come from each activity. No matter what, I’m hooked again.


Here are a couple turtle photos. Only one is a redbelly (Pseudemys rubriventris) - the second from the left. The rest are the introduced red-eared sliders (Trachemys scripta elegans). 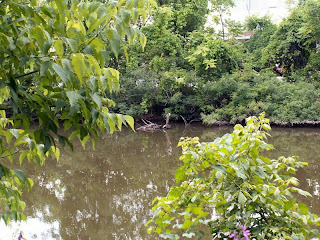 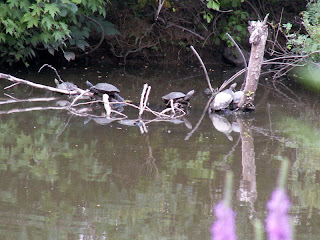 Posted by Bernard Brown at 2:44 PM No comments: