I can't say I planned to combine herping and snowshoeing; it just worked out that way. The landowner whose property I had shown up to search for red salamanders (Pseudotriton ruber) took a look at my boots and, in his friendly, gentle way (in no way letting on that I, as I quickly realized, was stupid to even consider covering that much ground in that much snow without them), offered me the use of his snow shoes and a walking pole (I insisted on carrying my potato rake in the other hand). 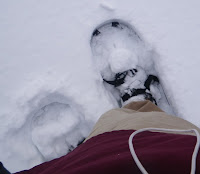 Snow shoeing, as I quickly discovered, is hard work, even if it beats sinking up to my thighs in crusty snow with each step. After checking out a well-maintained spring house next to the road and seeing only a mystery frog and some tadpoles, I set off for the far side of the property, towards the base of a forested hill where the map read "Old Spring House."

Even if the reptiles are all wisely sleeping through the winter beneath the ground or water, amphibians will often persist where the water stays liquid: in streams and in seeps and springs carrying the constant above-freezing temperature (50s or so) of the earth to the surface.

Once upon a time, before refrigerators, people took advantage of the constantly-cool spring water to keep perishables from going bad, building spring houses to trap in the cool temps.

Today the remaining spring houses can harbor stream-side salamanders such as two-lines (Eurycea bislineata), long-tails (Eurycea longicauda), and red salamanders (Pseudotriton ruber). Unfortunately this spring house had seen better days. The roof had fallen in, and the interior filled with snow. 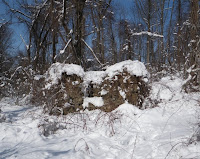 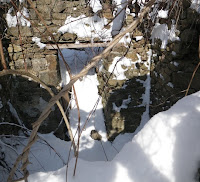 I turned around (a very deliberate action in snow shoes) and tromped back across the fields towards the marsh.

Back at the marshier parts of the property, I took advantage of a frozen creek, much as the other mammals in the area have done. 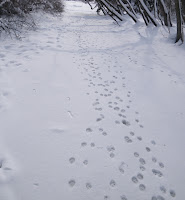 I kept an eye open for springs in the marsh. In warmer weathers these are spots that, if you spot them ahead of time, look deceptively solid, with mud sort of pushed up into the clear water that blankets the other spaces between the shrubs and sedges. If you don't spot them ahead of time, all you know is that you are in up to your crotch when a second ago your waders had at least a couple feet of clearance. I poked around in such a spring - now clearly identifiable as an open patch in the marsh ice - but found nothing. (note to self, I REALLY need to get a proper dip net)

Back to the car I tromped, but on the way back I decided to check out that first spring house one more time. Like a lot of nicer spring houses, this one featured thick growth of watercress along the spillway - quite bright and yummy in warmer times, but now wilted and spotted. I picked up a clump of watercress and noticed one of those tadpoles wriggling away, but this time I got a close enough look to say that it wasn't a baby frog or toad.

I picked up another clump, and then another, and soon I had a couple of the larvae to examine more closely (these are about two to three inches long): 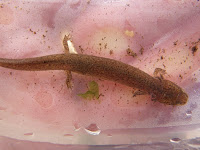 Aha! These aren't run-of-the-mill two-lines, or even the slightly sexier longtails; these are the sturdier offspring of true amphibian eye candy, the red salamander. Here's a shot of an adult from another location a couple years ago.