Last week I rode the R5 out to Radnor for work along with two visitors from my day job’s agency’s headquarters in . Half looking out the window as we rode through West Philly, I pointed out the construction of the Lowe’s near , but then I looked again, surprised that we were passing the construction again.

On our way back I watched carefully, and my worst suspicions were proven true. The Lowe’s and the rest of the shopping center are well under way, but earth movers were clearing the eastern section of the Philadelphia Industrial Corporation (PIDC) land on which I find brown snakes (Storeria d. dekayi). 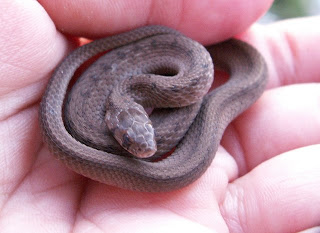 At the end of August, when I last found a brown snake there (the one pictured above), the land was covered with weeds and a couple patches of trees. There was a ridge a few feet tall just off the sidewalk and then level ground to the tracks. 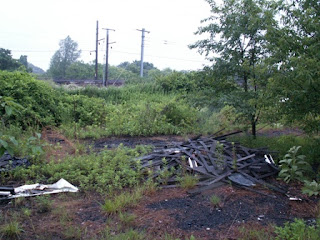 One month later, as we rode back into on the R5, there was just a plot of level soil. If it hadn’t been in the same place as my brown snake spot, I never would have recognized it. Here’s how it looked last weekend when I drove out to see what they’d done. 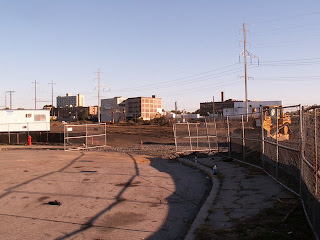 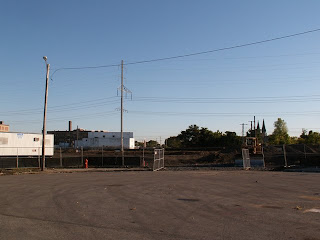 I’m not sure how many snakes have been bulldozed, but I figure at least several dozen. It might have been many times that; it all depends on how far along the fall migration was, and how extensive that migration is. Last fall and winter we found scores of brown snakes under a door and a railroad tie. They were either already in place for hibernation or hanging out next to their den. I’m still not sure whether those snakes had come from just the immediate surrounding area or from further away in the vacant fields. If the hibernators we saw last year were all from the immediate area, then the population in that section is pretty high, and I figure a few hundred at least are already dead. If the snakes from last winter were from further away, then I figure the population in that section is lower, and fewer were killed right away by the earth movers. In that case, the others have been arriving and finding nowhere to spend the winter. It’s hard to say whether they’ll be successful, whether they’ll find a safe place to hide from the cold or whether they’ll freeze to death in the next couple months.

I’m a little sad about this, but I can’t say I’m angry at anyone. The bigger environmental issue is that of sprawl, and it’s far better to develop vacant lots occupied by one common species instead of some marshy meadow in Chester County full of bog turtles (Glyptemys muhlenbergii), a couple other turtle species, a half dozen amphibian species, and a few snakes too.

It’s fair to also consider (although it doesn’t make me feel any better) that these kinds of things happen naturally. Floods sweep islands clean. Fires wipe out forests. Storms knock over trees all the time, tearing up roots systems and destroying underground hibernation dens.

I know that there’s nothing particularly unfair about bulldozing these snakes and wiping the population away, and I know the environment of the might be the better for it. Still, I’ve gotten to know and like these snakes. However soft or irrational my sense of loss, I’ll miss them.

Posted by Bernard Brown at 4:47 AM No comments: