So, how do I top the last post of awesome baby and adult timber rattlers (Crotalus horridus)? Well, basically I'm just going to throw more of them at you, but this time better photographed.

A week after the post below I did the same trip, but this time I had herping buddies with me: Eitan and his buddy Danny. Both of them have better cameras than I do, and they take better photos too. Both also proved game to try yet another way to the site - a trail a non-herper hiking friend told me about. That trail proved to be a perfect route in - fast and pretty easy. It doesn't take me by all the rocky outcroppings I'd like to hit, but my route here is still a work in progress.

Have I mentioned any of our frustration at only finding timber rattlers at Forbidden Ridge? I know that sounds absurdly ungrateful - like only getting ice cream for a free dessert and complaining about not getting any cookies too - but it's a real gripe. I don't think it's necessarily a problem we have with rattlers; rather it's that we don't handle the venomous snakes, and we sometimes miss the feel of actually getting to pick a snake up in our hands (the elusive ratsnakes - Pantherophis obsoleta - are perfect for this).

I can't say this little guy made us feel all that much better: 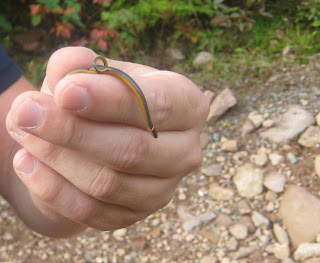 That's a baby ringneck snake (Diadophis punctatus) I found under a rock on our way to the main site. It was cute, but not very impressive to handle :-)

I am pretty wary of posting habitat shots for this site since I don't want to give it away, but I feel good about these two pictures, namely because I know how hard we worked to get to where they are and how hidden they are if you're not already standing right in these spots. 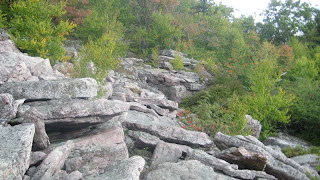 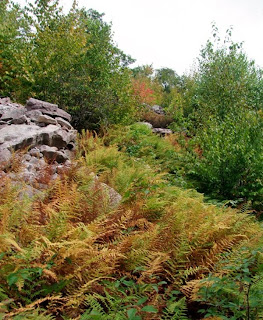 It is gorgeous country, and I like to repeat that even if I don't find anything, at least I get in a great hike.

Luckily this time we didn't have to settle for just the hike, though. The babies were out in force again. 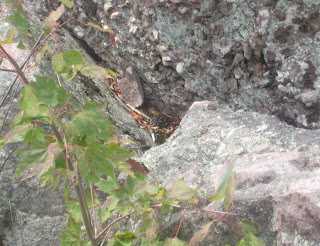 (next photo is Eitan's closeup of the same snake): 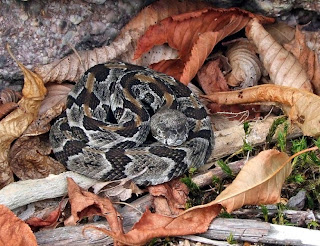 Here they are peeking out of a crack: 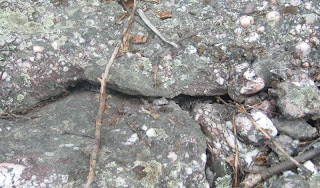 Here's one who has already had its first shed and looks pretty (Eitan's shot). 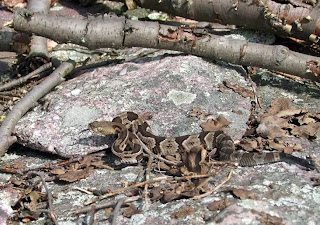 What I just plain adored was the way the babies hung out with the adults. That sentence understates the situation; these babies were almost certainly hanging out with their mothers. We didn't sex the adults, and we certainly didn't do genetic tests to connect the family trees here, but after seeing gravid females basking, then seeing babies with adults (many looking deflated and skinny, just like snakes do after they give birth or lay eggs) at the same spots later, I think we can say these babies were with their mothers, even if the babies and mothers were mixed up and hanging out with each others offspring and moms.

Can you see the babies sitting inside the coils of the adult in the middle of the shot? 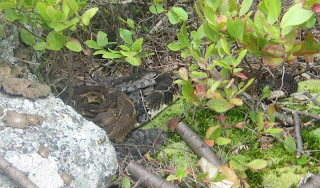 Here are two of Eitan's shots: 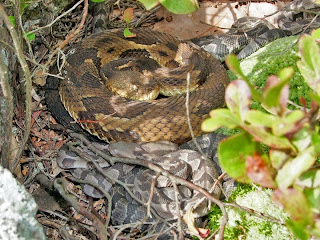 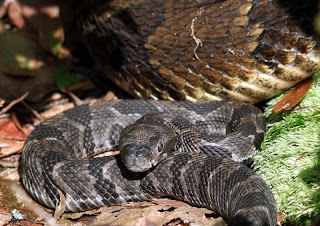 I don't know if I've ever seen anything cuter, ever. We're so used to snakes being non-social, heartless little critters that don't interact with each other except to fight or mate that seeing all these snakes exhibiting apparently social behavior is especially heartwarming. I should mention here that studies have indicated social behavior among timber rattlers. Babies seem to hang out in groups near their moms for a few weeks after birth. Babies seem to follow the scent trails of their elders to find the hibernaculum (winter den), sometimes traveling together. There is also some interesting observations and speculation out there about adult females hanging out with their sisters while gravid, with some non-gravid girls apparently swinging by to visit. We shouldn't make too much of this, but timber rattlers apparently are able to regard each other as more than just 'other non-food mobile objects in the landscape, half of which are worth having sex with once a year.'

Now, in another interesting observation that is worth some fun, wild speculation, Eitan was peering into a baby-stuffed crack when he remarked, "there's a garter snake in there."

I walked over, and sure enough we could see two garters (Thamnophis sirtalis) back in the crack with a bunch of little rattler babies.

None of us had heard of this before, and I can't find anything written about it in the books I have. We've heard of other species, such as ratsnakes, shacking up with rattlesnakes for hibernation, but never a smaller species, one that actually has been documented as rattler food, hiding with baby rattlers. As for the wild speculation part, we have to wonder if this is more than coincidence. The nearest water is about a half mile away, and although garters do range away from water, we haven't found them before on that slope, and it still seems like a strange place to find them randomly. Were they actually selecting a hiding spot because of all the venomous snakes sharing it? That's impossible to say based on this observation, but it sure is fun to think about. 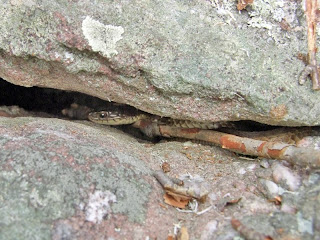