I wish I had something more exciting to report. Partly this is from blogging pride, but mostly it's from the basic craving that all herpers have to get out in any good weather and find something slimy or scaly.

In the middle of the summer I look forward to either being in the water or being in the mountains. I can do the former if I don't have to tend the baby (she's sitting up and crawling, but I don't think she's ready to fight the current in the Delaware quite yet), and I can do the latter with the baby but only if I have the car. Lately on the weekends I've been taking care of the baby but without the car.

On Sunday, though, I worked it out with Jen, who had to work the morning, that I would drop her off at work and take the baby out flipping AC.

Non herpers might need some translation there: 'flipping' refers to the activity of looking underneath the objects being 'flipped' to see if any herps are hiding underneath. Though the term 'flipping' might imply a reckless process, in practice we carefully lift each object and then carefully replace it just like we found it. Sloppy flipping is enough to get you black listed in herping circles. 'AC' stands for 'artificial cover,' in other words trash.

Thus, I put the baby in a stroller and we walked in an area of Philadelphia where milksnakes (Lampropeltis triangulum) are known to occur and where dumped trash is abundant. Obviously I didn't find any, otherwise I'd have led off this post with an actual something exciting to report.

A little later on I decided that I needed to see some kind of reptile or amphibian, even if it was easy, distant, and reliable. So, Magnolia and cruised the towpath canal along the Schuylkill and looked at basking red bellied turtles (Pseudemys rubriventris). It ain't much, but it ain't nothing. They really are impressive turtles. I like how they often bask without dragging themselves completely out of the water. I respect a turtle that can flout social conventions like this. 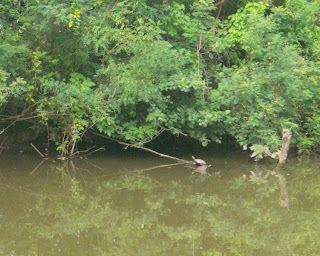