We had one more shot to find some interesting critters in Brazil: our hike in the Tijuca National Park in Rio de Janeiro.

I had booked us two spots in a guided hike up to the top of Tijuca Peak. Guided hikes can be a lot of fun as hikes, but they are not often great for herping, since the group tends to want to keep moving rather than stop every twenty feet to look under logs. So while I was excited for the hike and for the beautiful views of Rio, finding herps was going to be a question of incidental sightings rather than intentional finds.

The Tijuca forest and park (some of the area is national forest, some is national park) date from 19th century. The land was originally used to grow coffee and sugar, but in mid-1800s the government decided to let it grow back as forest to protect Rio de Janeiro’s water supply. The result is a remarkably large and wild chunk of Mata Atlantica (Atlantic coastal forest) right next to a city of six million people.

The views were beautiful, as expected. The weather was cool and damp, but it stayed nice enough to take some good pictures even with the crappy, backup, disposable cameras. Here I am at a waterfall relatively low down in the park. 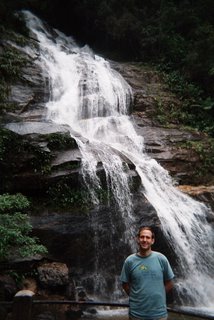 Here we are at the “Vista Chinesa.” 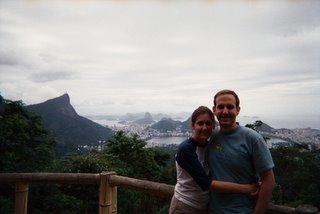 Last, here are some pictures of us ascending and then standing around the top of the peak. The dense forest gives way to low trees and then bushes and large tussocks of grass at the top. 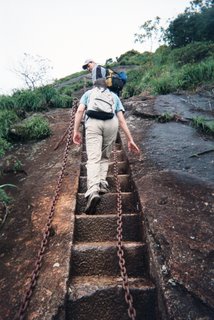 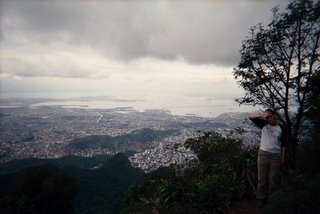 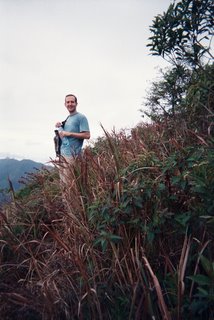 We actually did spot some critters, or rather Jen spotted three and I saw the tail of one snake. They were all at the top of the peak, where we were graced by the only sunbeams that made it through the clouds during our entire stay in Rio.

Jen pointed out the first one, what looked like another Tropidurus torquatus, and then a skink basking on top of a large grass tussock (I love that word). I tried to get a photo of it, and this is what came out. I am pretty sure it is some species of Mabuya. 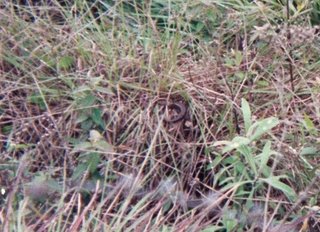 I had grilled our guide on the way up about the snakes he had seen, and they seemed to fall into two categories: a few species of pit vipers (Bothrops species) and something he said is called the cobra cipó, Portuguese for “air root snake." The first group are all venomous, some quite dangerously so. The latter, a long, thin, green snake, did not sound scary.

I saw the green tail of something slipping away into a heap of grass and I hesitated. I can’t remember if I was close enough to leap to grab it, but I did not. I have to guess at what I saw slip away, and I’m guessing it was the cobra cipó (Chironius bicarinatus), a fast, diurnal snake that is sort of a South American version of our racers and whipsnakes (Coluber and Masticophis species). Here is a link to a Portuguese-language web page about the cobra cipó: http://www.saudeanimal.com.br/cobra_cipo.htm

It feels kind of sad to finish the last post about my honeymoon. I had such high hopes, and we ended up finding so little. To write the final chapter feels like forgetting about even the aspirations; I’m shelving a fantasy. I don’t know if we’ll make it back to Brazil. We certainly intend to visit the Amazon some day, and the Pantanal still looks really attractive, but Bolivia makes a little more sense to me since I speak Spanish and know the country from having spent a couple months there back in 2000.
Posted by Bernard Brown at 7:03 PM No comments:

I’ve been intrigued for a long time by urban brown snakes (Storeria dekayi). 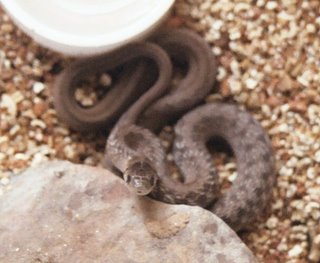 I remember reading about them living in Central Park in New York, and I was not surprised to see them dead, flattened, and dried out on roads near Grant Park in Atlanta or near the Wissahickon. I brought one of those rigid little snake chips inside once to look at it more closely and then put it away in my dresser and forgot about it, a slip of the memory that Jen still reminds me about; she was the one who found it several months later while digging around in my dresser for socks to borrow.

I live in West Philly, a landscape of rowhouses and old three-story duplexes. Some of these have little front gardens or yards, some don’t. A lot of blocks here have alleys and parking spaces running through the middle, some have little yards out back, but when you add it all up, there is not a lot of green space around here.

Thus I was kind of shocked when a friend who lives on the 4300 block of Locust showed me a snake that her cat had dragged in. It had actually dragged in a total of five, but this was the only one that was alive, and she was nursing it back to health. It was a northern brown snake (Storeria dekayi dekayi), and a big one at that – all of fifteen inches and as thick around as my pinkie finger.

I’ve heard more reports since then of northern brown snakes in unlikely (to me at least) places. One of Jen’s coworkers spotted one in her basement in East Falls. Friends reported seeing a small snake one night at 48th and Baltimore. Another Philly herper I recently started corresponding with reported seeing them in backyards in Germantown.

While I have been surprised at finding northern brown snakes in West and Northwest Philadelphia, I am ruling out Center City, where there is next to no green space and what green space can be found (Rittenhouse Square? Logan Square?) is intensively landscaped and isolated. Back yards in Germantown and West Philly are connected to other yards and separated by streets with relatively little car traffic. The yards are less likely to be doused with pesticides, and most of the time are left alone by humans.

I have thought of a few strategies to find northern brown snakes in Philadelphia:

· The first thing that came to my mind (and the riskiest), is to walk down the pavement between yards in the middle of relatively abandoned blocks in Southwest and North Philly and look under trash in the vacant yards.
· One slightly-safer, similar plan is to look under trash and debris in vacant lots – I still run the risk of getting shot for poking around someone’s stash, but at least I don’t run the risk of getting shot for jumping into someone’s back yard.
· The safest but least exciting plan is to look in parks. I’ve found live brown snakes in Cobbs Creek, and I know they live in the Wissahickon. I’d like to spend some time looking under logs in the wooded sections of Fairmont Park northwest of and across the river from the art museum.
· Coming in at safe but unseemly is herping cemeteries. There are great slightly-neglected cemeteries all around – in West Philadelphia, Southwest, North Philly, and so on.
· Safe and maybe the richest in terms of trash and debris are abandoned industrial spaces. I checked one such area out on Saturday, and here are some photos. I saw “No Dumping” signs, which of course mean that a lot of dumping goes on. This space is also supposed to be redeveloped in June, so I’ll look forward to relocating any snakes I find. 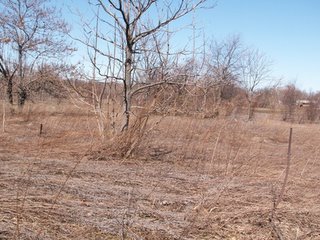 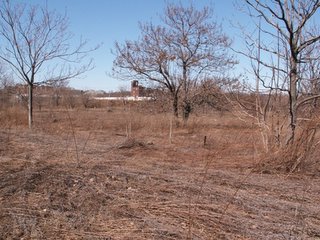 The weather will probably be getting warmer at the end of next week. With the days getting longer too, I’m looking forward to biking all over the city after work to see where I can uncover some brown snakes.

P.S. I looked around for critters in South Jersey in western Atlantic County and near Winslow. I found nothing.

Posted by Bernard Brown at 6:54 PM No comments: