We humans, experienced only in the relatively straightforward progression of mammalian reproduction, assume a direct sex - fertilization - pregnancy - birth, all of it taking a neat nine months or so.

Timber rattlesnakes (Crotalus horridus) take the long view on reproduction, however. Late summer tends to be the time for romance, with males occasionally fighting it out (by wrestling, not biting) to win the heart of a female in heat. Then it's time to crawl up alongside her, rup her neck, and, if she's game, finally seal the deal. From that point the rattler sperm don't fertilize any eggs waiting inside the female; the eggs aren't ready yet. The sperm hang out inside the female all winter until she ovulates in the spring, and then her pregnancy really begins, only to end with birth in the late summer or early fall.

By now we've decided that the females we've been observing on Forbidden Ridge are pregnant (or gravid, to use the technically correct term). Pregnant human women tend to eat, sleep, and generally work just as they do the rest of the time, if a little more laboriously as they reach the end, but rattlers tend to take the whole summer off. The gravid old girls find a nice sunny spot on the side of the mountain and soak up the sun. They don't eat, they don't hunt, they just hang out and bask. If that seems implausible to you, keep in mind they only do this no more than every three years in our area (maybe every two in warmer parts). The only explanation we can think of for a group of rattlers not doing anything all summer but just sitting around and basking is that they're pregnant, and now Scott and I are hoping to catch the end of the whole process - babies!

Well, we didn't see any babies on the 18th - too early, we figure. We were also a little late up the mountain that day; it was sunny and hot, and although we saw seven or eight in the shade, only one snake was out in the open. But check out how fat she is. 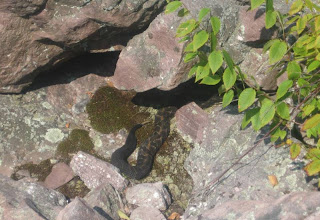 I guess we have to make another trip.
Posted by Bernard Brown at 4:26 AM No comments: