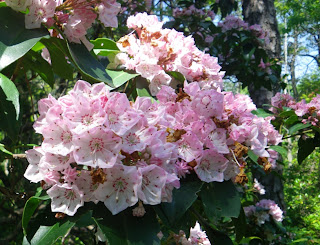 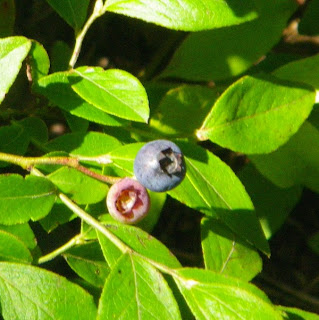 I found a ratsnake, so everything is going to be okay. That's a basic truth of my life, by the way. It's impossible for me to find a black ratsnake (Pantherophis obsoleta) and then believe that everything isn't going to be okay. I might not believe in God, but I believe in black ratsnakes. Indeed in my more mystical moments I could be convinced that black ratsnakes are linked together into a super consciousness that, when I find one, taps me into something sublime and much deeper than a snake. I can't look one in it's big, bugged out eyes as it calmly inspects my face and think nothing is going on in there. Since individual snakes are unarguably stupid, I'm left with the ratsnake-as-more-than-snake hypothesis. Right? Douglas Adams had his lab mice; I've got my black ratsnakes. (so now you know how I chose my avatar)

Thus I was thrilled to introduce my six-month-old daughter to her first black ratsnake, or rather to present her to my ratsnake deity.


I like to think I have a way with ratsnakes (even in a very mundane sense), and though this one nipped me when I gently pulled it out of the bushes by the side of the path, it quickly reverted to the calm 'explore-the-human' mode that so charms me. 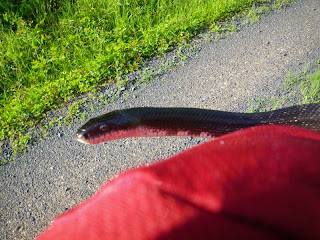 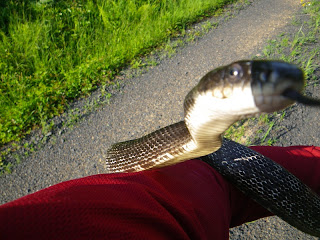 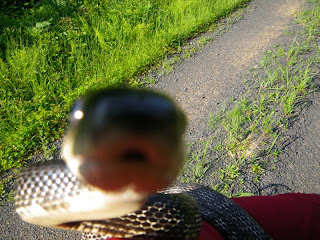 Thus I would have been surprised if it had bitten her, but the thought of how Magnolia's mother would react if I brought her home with a couple lines of ratsnake-tooth pinpricks (ultimately less damage than she does to herself when we forget to clip her fingernails, but still...) kept me from letting the ratsnake get within touching range. Still he got a good look at her and she got a good look at him, so I feel confident that the proper forces of the cosmos are aware of Magnolia. Then she got annoyed that the daddy-ride through the woods had stopped moving, and she promised to escalate the complaint if I didn't start walking again.

This, it turns out, is one of the two major challenges of mountain herping with a six-month-old (the other being the basic rock-hopping balance complications): that she has no patience for still, quiet contemplation. I might have my reasons for spending time in the woods, but hers are the rhythmic lurching of the daddy-ride and the rich scenery moving past her perch on my chest. When the daddy-ride finds a really neat basking copperhead (Agkistrodon contortrix) and wants to stare in admiration at its autumnally beautiful hourglass pattern, the passenger starts squirming and shouting loud enough to wake the copperhead, however deaf it might supposedly be to airborne sound. 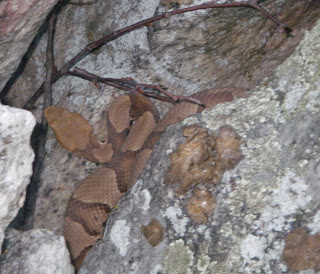 The other (three major challenges! I feel like Cardinal Ximenez) is simply getting out of the house on time, so that you don't show up late on an inconveniently sunny day and find all the basking spots devoid of timber rattlers (Crotalus horridus).

But we found a black ratsnake, so everything is going to be okay. 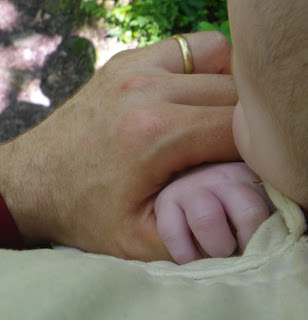 Posted by Bernard Brown at 11:38 AM No comments: