Some people go shopping when they're upset and need to feel better. Some people binge on ice cream or chocolate, others on alcohol. I like to catch a few critters to make myself feel better.

On Monday, on my way home from work to catch an important phone call from a potential funder of the PB&J Campaign (my other big hobby), my beloved bicycle started riding really strangely. The rear wheel was catching some kind of new friction, and it was shifting back and forth in a very strange way that made me stop and pull up on the sidewalk for an emergency inspection. It took me a minute of checking the usual suspects for mid-ride bike problems, but finally I saw that part of the frame had broken near where the rear wheel attaches. I could still ride it, but with the image of the other side cracking and the wheel falling off on the Walnut Street Bridge, I rode and coasted very, very slowly home, the whole time hoping and praying I'd make it home in time for the call.

I made it home in time, and the call went pretty well, but I was still feeling kind of stressed out by the experience and genuinely distraught about the bike. I have grown attached to the old girl over the past three years. She's an old Raleigh Technium road bike that the guys at Firehouse Bicyles had rehabbed and converted into a short-handlebarred zippy little machine perfect for riding around Philadelphia. On Tuesday they told me that they could weld her back together again, but Monday evening I needed to make myself feel better.

First, I got the car from Jen (still at work) and I went for a swim at the Kelly Pool, site of the confrontation two weekends ago that drove me to turtling - see last week's post. There I swam for a half hour, and then hopped in the car to catch brown snakes and garter snakes (Thamnophis sirtalis).

Here are some of the little guys and gals that cheered me up that evening: 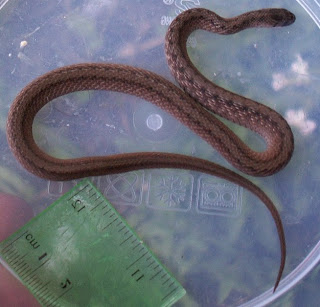 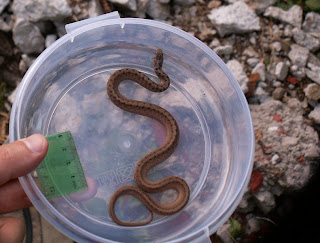 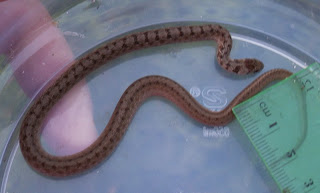 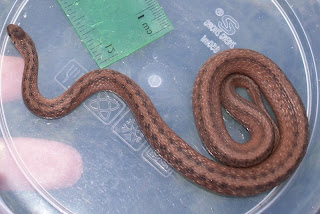 That last girl is actually one I'd seen before a month ago, in the exact same spot.

Scott recently raised the possibility that the population of brown snakes (Storeria dekayi) in the Mt. Moriah Cemetery might be infinite. Of course that statement is not what it seems at face value; there are certainly a finite number of snakes living there right now, but over the time which we have to study them they might practically be beyond counting.

The principle of a mark-recapture study is somehow marking snakes so you can tell them from the others and so that you know you caught it in the past. As you continue catching snakes, the ratio of previously-captured snakes to new snakes can give you a sense of how large the overall population is. If there are very few snakes in the population you are sampling, let's say 50 for the sake of the discussion, and you catch ten each time you visit, then after a few visits you would have marked a large proportion of the snakes, and there would be a strong probability of catching previously-marked snakes in the ten you catch each time. If there are a lot of snakes, say 1,000, then those ten snakes per trip don't add up to a large proportion of the overall population, and you'd expect to re-capture fewer. There are a lot of assumptions and conditions in there, but that's the basic idea - the more snakes you recapture out of the snakes you find each time, the smaller the population.

Now I haven't gone to the cemetery as often as I perhaps should have this summer, but I've marked about forty-five snakes there so far. I've recaptured about three (including the one from Monday). I'd like to keep working at this for a couple more years so I've sampled the same places in the same seasons, but when I mentioned my really low recapture rate to Scott, he replied with a question: how long do brown snakes live? (The answer is complicated and I can find little information in the literature about brown snake longevity; in captivity they can probably live for more than ten years, but in the wild most babies are eaten or freeze before maturity, and I would bet that adults don't often live more than five or six years before they're eaten by something.)

I think I called Scott some nasty name, since he was basically pointing out the possible futility of my effort. If it takes me a few years to mark enough snakes to recapture enough to make an estimate of the population size, then the snakes I've marked earlier might tend to die off naturally at a high enough rate to make it impossible for me to mark a meaningful/useful proportion of the population.
Posted by Bernard Brown at 6:43 AM 2 comments: