The story of basking turtles usually goes something like this: You see turtles basking, and maybe you can identify what they are, but before you can get close they all jump in the water. That's the end of your interaction with them. Maybe you can watch them with their heads peeking out of the water, watching you, but that's about it.

A few years ago I learned about a way to keep after those turtles, a way to actually catch them even after they've jumped into the water. It's ridiculously simple - you just jump in the water and grab them. Of course it helps to have a mask and a snorkel, but apparently turtles are pretty easy to grab once they've dived off their basking perches since they often just park themselves on the bottom or around snags and root masses by the shore.

This year's round of aquatic turtling began with me announcing on Field Herp Forum that I was going to hit the Delaware on Friday (July 10th) and inviting anyone who wanted to come with me. Most of the time I'm secretive (borderline paranoid) about my herping intentions and locations, but this time I felt like I could relax. Map turtles (Graptemys geographica) are likely not native to the Delaware (although they are native to the Susquehanna system in Central PA), and their presence there is well known; I'm not giving away any secrets, and I don't care if people catch the turtles and take them home.

Only one other herper offered to join me - Marc, who goes by Pinhead on the forum, and we started early in the morning 7am, which in retrospect might have been too early; the sun was barely high enough to warm any turtles trying to bask. The first couple spots we had been advised to check out did not have any turtles we could see, but I did see a beaver swim by. (Yet again I thought to myself, "Wow, beavers are a lot bigger than I think they are," and then it dove with a thunderous splash that scared the crap out of me.) We're stubborn herpers and the morning was young, however, so we went to our third spot.

We walked to the water and, in a pretty casual, non-revelatory way, I spotted two map turtles basking on the exposed roots of a fallen tree. This is a tough photo, but you can kind of see them on roots emerging steeply from the water towards the bottom-right of the mass of roots. 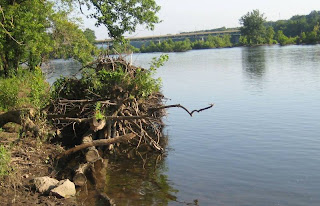 Map turtles are notoriously wary turtles; almost as soon as you can tell what they are they dive into the water, and these two jumped before I could get close. But that was okay; it was consistent with our plans. I waded into the water (chilly but bearable), and after a couple minutes of walking slowly and studying the rocks on the bottom I found one of our turtles.

Here he is hanging out of his shell a little: 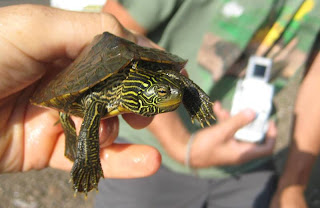 Here's a shot of him from above, showing why they call them "map" turtles - the wavy network of orange/pink lines on the green background: 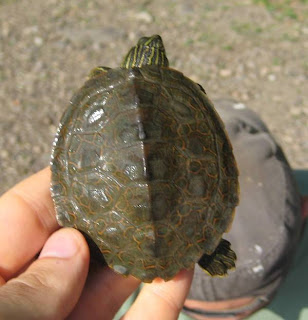 Here we are posing with our find, first me and then Marc: 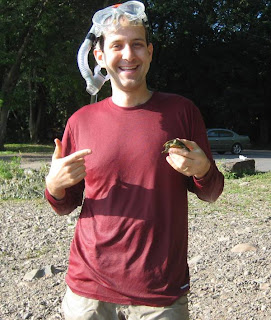 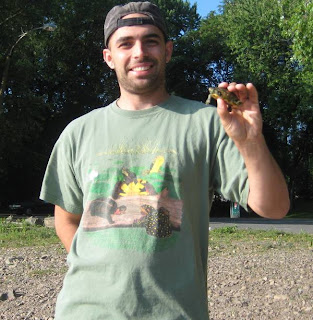 We congratulated ourselves, and then decided to move on to another spot. We waded around for a little while, but Marc spotted a bunch of basking map turtles directly across the river. They're not in this shot, but it gives you an idea of how wide the river is: 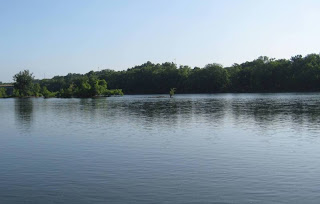 I thought about wading across, and I actually started, but about a quarter of the way out it occurred to me how long it would take me to get there, and with the push of the water growing stronger the deeper it got, I made the wise choice to turn around and work on how to approach them from the other side.

That would prove harder than we initially thought. We had no trouble driving down to the nearest bridge and across, but we weren't sure where to park. The opposite bank is the Delaware and Raritan Canal State Park, basically a long walking/biking path along a canal. The problem was that there wasn't a way to get from the road across the canal.

We tried one possible pull-off, but we found no way across. However Marc did glance down and notice there in the weeds this old girl digging a nest. 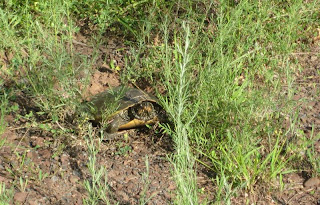 We felt a little bad interrupting her at all, so we got some quick photos in and moved on.

Ultimately we figured on parking relatively far up the road and canal and walking the way back down the path to where we needed to jump in to access the turtles - ultimately about a mile and half up the canal.

We started at the mouth of a small creek flowing out into the Delaware. Marc almost instantly spotted a hatchling map turtle - a really adorable little creature. 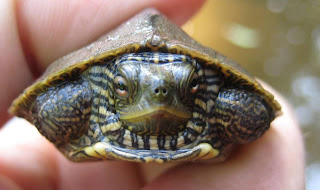 I then set off downstream, figuring I'd get as close as possible to the adults basking about a hundred yards away. When they dove, I'd dive too and try to spot them on the bottom.

Of all the ways to move across the surface of the planet, this might be my favorite - drifting and paddling in fresh water, not swimming as much as adjusting my position in the current to get around boulders. It's a lot like dream flying, with the rocks and boulders scrolling by beneath me and a light, agile sensation as the water carries me along.

I was aiming downstream still, but watching the bottom when something that was obviously not a rock appeared on the bottom below me. It was a map turtle! I put my foot down to stop (I was in about four feet of water) and turn, and picked the big girl off the bottom.

Marc was wondering what the hell I was doing breaking off my course downstream, but I popped out of the water and held the squirming turtle up in the air like a trophy.