I’ve written a little lately about hibernacula (hibernation dens) where snakes and many other herps spend their winters. Timber rattler (Crotalus horridus) populations, for example, spend the winter together. In the highlands they choose rocky outcroppings and cliff faces on south-facing slopes, and in the they den up in holes in stream banks. Even if a species does not den up with a lot of its friends and family, individuals do have safe locations where they hide from the killing freeze of the winter. Box turtles (Terrepene carolina) might head for some corner of their territory with deep leaf litter and soft, damp soil they can burrow down into, and snapping turtles (Chelydra serpentina) in a pond might burrow down into the mud close to an inflowing stream, where the water will stay liquid and oxygen levels high.

The overall result is that a lot of herps are on the move as they’re heading towards their hibernation spots or in the spring as they’re heading out. They might spend most of the year safely away from roads, but if where they hibernate is on the other side of the street, they’ll need to cross it.

So, on the morning of September 26th when Scott called me at work to see if I wanted to go road cruising with him and Frank, I went right into my supervisor’s office to ask to get out early.

We started off around , and charted a course for the heart of the . We took a circuitous route through the suburban/forest interface as the sun set and got in position just as it got dark.

Road cruising can be incredibly boring if you just ride back and forth on the same stretch of road, but that’s what works if you know you’ve got a particularly productive stretch of blacktop. What makes a stretch of road productive? It has to lie between two places where your target herps want to be. In early summer you might find a lot of turtles by cruising between water and upland nesting spots. (That’s also how all those terrapins – Malaclemys t. terrapin – get slaughtered on the ). You might pick a road that has wetlands to one side and forest to the other to catch kingsnakes (Lampropeltis g. getula) that might hang out in the woods during the day but hunt frogs around cranberry bogs at night.

As we drove, Scott and Frank regaled me with stories of how exciting road cruising is down South on a humid night, when every hundred yards brings another snake on the blacktop. After many such storytelling sessions on uneventful road cruising nights, I’ve learned not to point out that we’re in Jersey, not .

Another reason I complain about road cruising is how all the dead animals get me down. But if there’s anything more depressing than a dead animal, it’s a dying animal.

We were approaching our primary cruising destination when we saw a large snake on the shoulder. “That’s a timber,” Scott declared, and Frank nodded.

Sure enough it was a timber rattlesnake. It was coiled in an unnatural position (I’m not sure how to explain that more clearly, but somehow after you’ve seen a few hundred snakes, you get a sense of how they like to sit) and it did not so much as flinch as we got close. Frank collects specimens for a local museum, so he shrugged and started back to the car for a plastic bag.

I know a rattlesnake is probably the last snake most people want to see, but get past any ophidiophobic squeamishness or fear of envenomation, and you’ve got one of the most majestic beasts of the forest. It’s sad to see anything dead on the road, but there’s something particularly tragic about seeing something so powerful and beautiful killed by a tire.

As we gazed sadly at the snake, Scott nudged it gently with his snake stick. What surprised us was that the snake responded with movement. Sometimes freshly killed snakes writhe around reflexively, but this one seemed to be moving purposely, pulling away from Scott and starting to crawl feebly towards the edge of the shoulder. It dragged and pushed its head and front quarter of its body, I assume because of broken ribs, torn muscles, and massive internal injuries. 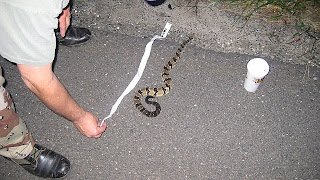 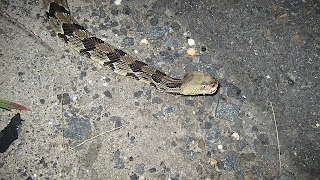 In some cases like this, many field herpers (myself included) would kill the snake right there to put it out of its misery. When it’s a state endangered species, and a creature as beautiful as this, however, you try to talk yourself into some hope that it could pull through and survive. After the photo session we moved it gently onto the grass off the shoulder and got ready to say goodbye.

That’s when a guy in a blue pickup truck pulled over. I initially worried that we’d be accused of hurting the snake, but no, the guy wanted to know whether we were dumping the snake there, since he lived nearby and didn’t want people dumping rattlesnakes near where he lived.

I was pretty confused, trying to imagine who drives around dumping endangered and dangerous snakes in the countryside, but we assured him that we’d found it there. As soon as he’d driven away, we moved the snake further off the road, into the underbrush where it would be harder to find in case our local friend came back to finish it off.

We headed on down the road, documenting a couple DOR ribbon snakes (Thamnophis sauritus), on our way to the primary cruising stretch for the evening. We made our turnoff and then promptly slammed on the breaks for a pretty eastern kingsnake (a.k.a. chain king). I'm a huge fan of their faces, jet black with those bright white markings on each scale. 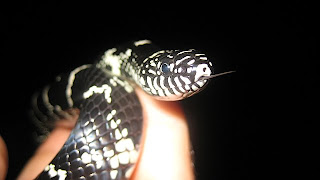 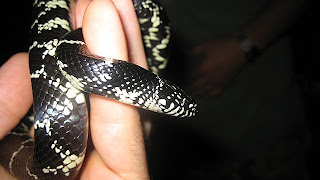 It was refreshing to find a live snake after the heartbreak of the timber rattlesnake, even if we next found a squashed baby northern water snake (Nerodia s. sipedon). There were a few Fowler’s toads (Bufo fowleri) and green frogs (Rana clamitans melanota) hopping around, but nothing like the hordes that cover the road in mid summer.

We found one more live snake that night, a baby black rat snake (Elaphe o. obsoleta). Is anyone tired of me talking about how much I love black rat snakes? I’m not. What great snakes! There’s nothing impressive about the babies, but they’ve still got that oafish, friendly quality to them that I find so endearing. I’m sincerely relieved we found it alive and not smashed on the blacktop. 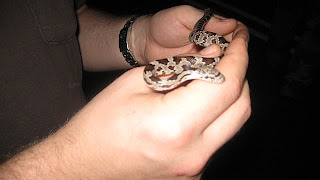 When road cruising you there’s often one hour out of the whole night that you find everything moving. Everyone waits for darkness to fall, and then there’s a temperature below which everyone settles down for the night. For us it was from 7pm to 8pm, with the temperatures falling through the mid and low 70s. We pulled back off our main road cruising strip and on the way home found a recently run-over baby pine snake, (Pituophis m. melanoleucus).

On our way back we stopped be where we found the rattler to take the GPS coordinates, since we had forgotten to when we initially saw it. We checked around the underbrush off the road, but we couldn’t find it. I still bet that it died later that night, but if it had the energy to drag itself deeper into the woods, who knows, maybe it made it.

Posted by Bernard Brown at 8:40 PM No comments: