There may or may not be a battle going on in the rivers and ponds of . On one side is the native red-belly turtle (Pseudemys rubriventris). These are big, dark, streamlined turtles that you sometimes see hauled out on snags, soaking up the sun. (They're part of a group of turtles called 'cooters' in the South. The only reason I mention that is that 'cooter' is such a great word for a turtle.)

On the other side is the invasive red-eared slider (Trachemys scripta). These are native to the watershed, but are unfortunately commonly sold as cute little hatchlings. They quickly grow too large to keep indoors in any but the largest fish tank, so some people dump them into their local rivers and ponds. They think they’re doing the turtles a favor, but most probably die in a few weeks (reptile adoption organizations are the right way to go here). Turtles need to know where to find food, where to spend the winter, where the good places are to bask, and in an unfamiliar, scary place only a few make it. That is all very sad, but the few survivors are the big problem.

The climate in the Delaware Valley is similar to the ern portion of the sliders' range. So, if two surviving sliders of the opposite sex find each other they can breed. Get enough survivors and and pretty soon there’s a sustaining population.

So what about this possible battle? In some locations around ( , , Heinz National Wildlife Refuge) the sliders are becoming more common while the red-bellies are getting scarce.

The live question is to what extent these two trends are connected. It might be that sliders do better than red-bellies in urban habitat – waterways shaped by people and polluted by our runoff. In this case we have little reason to fear the sliders. They might stick around cities, but in more 'natural' settings they might not have much of an advantage over our red-bellies. The red-bellies, perhaps more sensitive to pollution and engineering, might be declining with or without the sliders around. Figuring out whether the relationship between the rise of the sliders and the slide of the red-bellies is causal or coincidental is difficult to determine, but I hear there are researchers from Drexel working on this at the Heinz NWR.

I’ve seen both species swimming around in the same water before, for example in at the Heinz NWR. Frank, another herper, has mentioned that he's seen the sliders get common in the Manayunk Canal as the red-bellies have declined. A friend of Scott has also been mentioning how many turtles there are in the Canal, so last weekend (May 17th), I decided to check it out, binoculars in hand.

The sky was overcast as I walked from where I had parked at the bottom of Shawmont. The clouds make turtle spotting difficult, since the sun is what brings them out to bask. I headed past the falls on the at the head of the canal, and luckily the sun came out before I'd gone a few hundred yards.

I have trouble staying still and watching, but I gave it my best shot. In about a minute I was rewarded when a four-inch slider popped to the surface of the water, red stripe clearly visible on the side of its head.

I soon saw several medium-size turtles I couldn’t identify. Here’s a picture to show what I was looking at – dark, round shadows hanging at the surface with heads peeking up into the air. 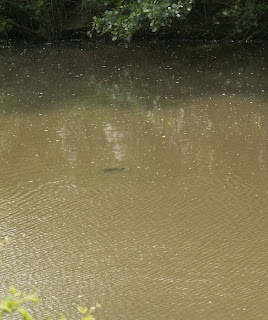 It's an art to identify a turtle by its head sticking out of the water, and I can't claim that I've mastered it. Often Chris or Scott will remark on how this turtle head is a red-belly and that one is obviously a snapper (Chelydra serpentina), while all I can tell is that neither is a stick. Still, I might be getting the hang of it, and I think I can tell the red-bellies, with their dark, squarish heads, from the others.

I think about fifteen of these turtles in the Canal were sliders, although I did see one large (7 inches?) painted turtle (Chrysemys picta) swimming around, so some of the other mystery turtles were probably our native painteds.

Three or four of the turtles were significantly bigger than the others (over 12 inches) and had those chunky black heads, so I’m pretty sure these were red-bellies.

These basking turtles were definitely red-bellies. (The one to the right with the brighter lines up the head and neck is probably a younger turtle.) The red-bellies are such impressive beasts, big, black, and kind of regal. They could kick the crap out of those puny little sliders if they wanted to; the question is whether they can out-breed them. 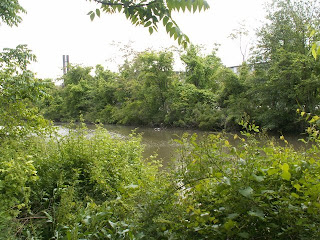 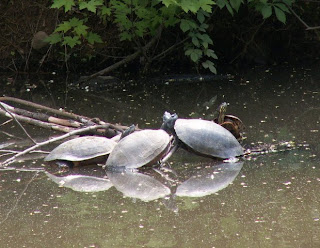 I also saw some smaller turtles basking, all of which dove in the water before I got close enough to ID them. A few were less flat than the others, with a kind of tented shape. I’m wondering if these were map turtles (Graptemys geographica). These are spreading up and down the system. They’re native to the Susquehanna River system in central PA, but they were only recorded on our side of the state () in the early 20th Century. They’ve been recorded in the Schuylkill as far up as Valley Forge, so they could be in the .

This might be the most interesting find of the day. I was thinking I should flip a chunk of sandstone next to the path at the base of the hillside, across from the water, but as I drew close I saw something small and green sitting on top of the rock. It was a baby slider. Cute isn’t it? 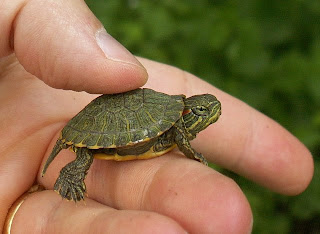 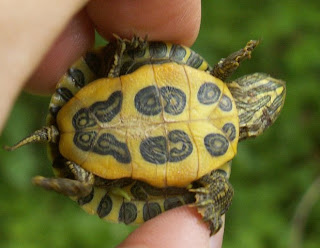 Where had it come from? Had someone just released it? Had it crawled out of the water? My money is on it having recently crawled out of its nest. Some baby turtles spend the winter in their nests and only emerge in the spring. I talked to a friend over at the Heinz NWR last week, and he commented that he’s seen baby sliders popping up around the Refuge, lending credence to this last hypothesis.

As I examined it, I realized I had placed myself in a minor legal quandary. It is illegal to release an exotic species into the wild, and since I had picked it up, putting it back down could constitute releasing it. However I didn’t want to keep it (cute now, but at 10 inches?), and I couldn’t quite bring myself to kill it. All its nest mates were probably already in the water or on their way, so would it affect the problem population much either way? So, feeling a little guilty about what I was doing, I chucked it into the water and comforted myself with the knowledge that virtually no baby turtles make it to adulthood.