I think it’s fair to say we’re in the middle of a heat wave. It’s hot, it’s been hot, and it’s going to stay hot for about another week. I do pretty well up to 90 degrees, and then I have trouble with outdoor activity. I don’t enjoy hiking anymore. I stop riding my bike to work because in an office it’s hard to recover from being that sweaty that early in the day. We’re going to try canoeing and maybe rafting this weekend; I hope the water will make for some outdoor fun in the heat.

I had picked Thursday (August 4th) as a day to meet up with Vivianne and the boys to check out the John Heinz Wildlife Refuge. A lot of people go there to see birds, but I go there because of all the frogs and the turtles you can watch basking. When we scheduled the trip, we didn’t realize the high would be around 96 degrees and sunny.

Do you like to hang out in the open when it’s 96 degrees and sunny? I sure don’t, and even the frogs make themselves scarce at those temperatures. I was a little worried about walking around in an exposed, shade-less marsh, even in the early evening.

We were rescued by Gary, a friend of mine who works at the Refuge. He offered to drive us around on a little tour, inside an air conditioned minivan. It turns out that the shorebirds don’t seem to mind the hot weather. We saw a lot of egrets and a couple species of sandpipers and yellowlegs, not to mention an osprey, great blue herons, a couple goldfinches, and lots of other birds whose names I can’t remember.

The coolest thing I learned (and I learned a lot) was that snappers (Chelydra serpentina) make really prominent tracks in the mud as they haul themselves from one deep spot to another. They’re exactly what you’d expect, I guess, if you dragged an eight-inch-wide, thirty pound shell through mud, but I had never before made the connection to say, ‘oh, those must be from snappers.’

A few turtles actually made it out of the water to bask (mad dogs, Englishmen, and water turtles…), although the only one that sat long enough for us to get a good look at it was an invasive red-eared slider (Trachemys scripta elegans).

After the tour we walked around a little. I was a little disappointed and feeling bad for the boys since we had so few herps to show for the effort, but then some deer stepped out of the woods into a grassy area of dried marsh and rescued the trip. I shushed and waved the boys over. They ran up for a good view, grabbing for my binoculars to see the deer up close and begging Vivianne to take pictures.

When I say that the deer rescued the trip, I mean they rescued it for me. This might be the point of the whole trip: the boys had already been enjoying seeing all kinds of things I wrote off as uninteresting. They liked the birds, but they loved the rabbits browsing at the edge of the roads throughout the refuge, and the deer completely blew their minds. It took that to convince me the trip was worth their while after all.

I guess I need to set lower expectations for these trips. If we find bullfrogs (Rana catesbeiana) and see one turtle basking, that works just fine. No herps? Well, check out that groundhog!

Our next date is the 15th of September. The Heinz Wildlife Refuge will be having a big festival with all kinds of raptors and big, impressive reptiles – maybe some of those anacondas and alligators that don’t live in our marsh.

P.S: Sorry for the late post. We were in for a wedding last weekend, and except for a frog (I think a green frog, Rana clamitans melanota), there isn’t much to report on. We did check out the banks of the in a cemetery near my sisters’ house. There were crabs scooting around the rocks in the shallows, and the serpentine shape of an eel caught my eye, but it wasn’t a snake. Here’s a shot of Jen and me with my nephew Ezra. 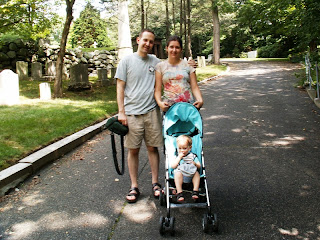 Posted by Bernard Brown at 2:31 PM No comments: