A week ago I decided to check out the west side of the Mt. Moriah Cemetery. The rains hadn't come yet, and I felt like I needed some kind of herp fix. I was also curious to see if any clean up work had been done over the winter.

I had helped out with a clean up day on the east side of the cemetery last summer, as part of an effort of the City of Philadelphia and the Friends of Mount Moriah Cemetery. That half is in Philadelphia, the west side in Yeadon. The City of Philadelphia has been trying to figure out what to do with the cemetery, and so far hasn't come to any good solutions. The last owner of the cemetery died, and his elderly widow lives out of state and is highly unlikely to produce enough money to cover the $500,000 it will take to maintain the Philadelphia side, never mind the Yeadon side where I spend more of my time.

On the Yeadon side I found that at least a little work had been done. The dumpster that had been parked there for months (more than a year?) was gone, and with it the house-sized piles of debris, sort of like someone had demolished a house and dropped the rubble in the cemetery. Now there were just a couple smaller piles, still including the toilet. 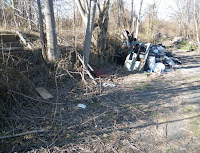 
I found no critters, not even red-backed salamanders (Plethodon cinereus), but I did manage to spread out some of the remaining debris in more favorable arrangements for finding snakes later in the season.
Posted by Bernard Brown at 8:44 AM 1 comment: