Here are some photos from the September 4th trip to Blue Marsh Lake.

First, here's a shot of Jen in the streambed at a small waterfall. 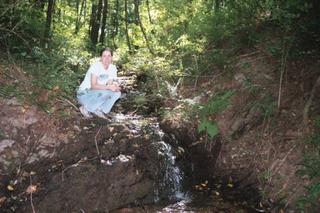 Here are two pictures of a big, relatively darkly spotted longtail salamander (Eurycea longicaudia longicaudia). We only found these at the mouth of the stream. 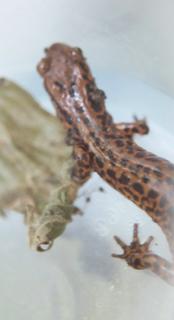 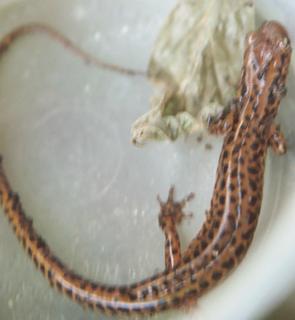 Here is a smaller longtail. Most I have caught look more like this one, with brighter yellow and less spotting. 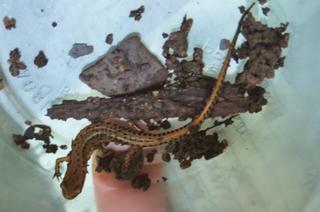 Here is a two lined salamander (Eurycea bislineata). We found these from the base of the stream as far up as we looked. 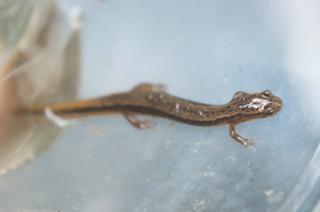 Here is a tiny (1/2 inch) northern dusky salamander (Desmognathus fuscus). It was so tiny and delicate I hated to handle it even to take a picture, but you can see how beautiful it is. 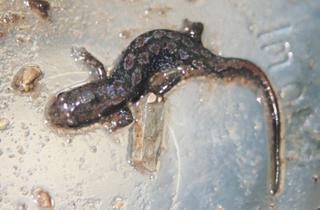 Here are a couple adult northern duskies Jen found under a rock together. 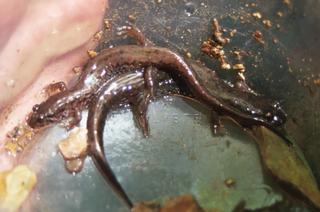 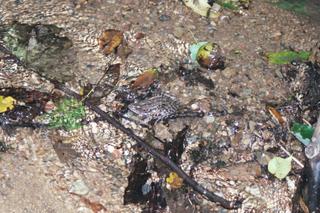 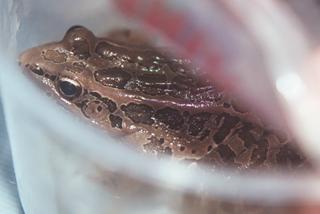 Posted by Bernard Brown at 6:29 PM No comments:

Today I bought myself a fluorescent orange baseball cap. It’s so bright it hurts to look at. Jen laughed hard when she saw me put it on in Dick’s Sporting Goods. She said she’s glad there are still several weeks until the wedding so she can think about it, now that she’s seen me in that cap.

I bought it on the advice of a man I met on Saturday at State Game Land #205 in Lehigh County. He wore a similarly orange strap around his shoulder and waist, and his hound wore a collar of the same orange and a small bell. When I met him on a dirt road bordering one of the food plots at the edge of Jordan Creek, I had just noticed some spent shotgun cartridges on the ground. He carried no gun, but I asked him if anything was in season. I had looked this up a couple weeks ago when I had decided to explore the State Game Lands nearest to Philadelphia, and I didn’t think anyone was supposed to be out shooting anything. He replied that groundhogs are always in season (long distance shooting, at two or three-hundred yards - easy to make mistakes at long distances), that there are always some idiots running around shooting other things out of season, and that I really should wear some orange to “take away any of the guess work.”

I don’t think I look like a groundhog, but I don’t think I want to get shot either, so I spent the two dollars on the cheap orange cap to wear when I’m out where people are running around with guns.

Jen said she doesn’t want to look for critters anywhere near where people are running around with guns (her reason for declining my offer to buy her a cap too), but I think these State Game Lands are fabulous. A fellow herper from Jersey recommended their Wildlife Management Areas, and like the WMAs, State Game Lands are areas of ‘wild’ land maintained by the state for fishing and hunting. They tend to attract relatively few hikers, they are crisscrossed with dirt roads that are easy to walk along, and, if they're like the WMAs, they are chock full of illegal dumping sites.

The one problem is all the shooting. These State Game Lands often have shooting ranges. Men (haven’t seen any women yet) will also just set up in the parking lots and shoot skeet. I’ve been careful to choose routes well away from these men with guns, but I still flinch every time I hear a shotgun blast from a quarter mile away.

I found no snakes on Saturday when I went out to #205 (I had tried another one in Chester County last week with no luck whatsoever), but I hit it really big in frogs and salamanders. I worked the banks of Jordan Creek and some of the neighboring hillsides. It was a beautiful morning (partly cloudy, low 60s) and a beautiful setting. The creek winds in long curves, and the hills come out steep from the banks. The leaves have just started to fall, so the trees rise out of a thin orange carpet to a still-dark canopy.

The hillsides are shale, which makes for fabulous rock flipping. The dark, flat rocks are great shelter for critters and are really easy to lift up. The smaller rocks are great for skipping in case you want to take a break.

There were stretches where I was finding something under every-other rock. I am not exaggerating. It got to where I was making a special point of stepping only on patches of very small stones, since I had to assume that the larger rocks were home to somebody.

The first critters I found were small (about one inch) green frogs (Rana clamitans melanota). I found one gorgeous red back salamander (Plethodon cinereus) maybe sixty yards up a dry ravine from the creek, I found a few very bright long tailed salamanders (Eurycea longicaudia longicaudia) along the banks, and one small, unusually yellow Fowler’s toad (Bufo fowleri) hopped across my path. The big winners of the day were the pickerel frogs (Rana palustris) and the two lined salamanders (Eurycea bislineata bislineata). Maybe they were concentrated along the water’s edge by the dry weather, but these guys were under almost every rock.

They were docile too. The low temperature the night before had been in the 50s, and most were still cool to the touch, which is why I think they let themselves be handled so easily. Not that I handled them very much – mostly just to pick them out of the way before I put the rock back down. That’s an important herping rule, but the way: always put the piece of cover down first, and then release the animal next to it. They’ll find their way back underneath, and you don’t want to risk crushing anyone.

The frogs tended to be well pressed into the gravel beneath the rocks, but the two lined salamanders frequently retreated into crayfish burrows. I saw a few of the crayfish. There’s something very cute about how they retreat backwards into their holes with their little claws raised and open. I wonder if they share space with salamanders or whether the salamanders just move in when the crayfish leave.

I tried an area near another parking lot at #205, but it was just some dry fields and scrubby forest I couldn’t hack my way through. I looked at my road map of Pennsylvania and decided to try a patch of state forest off of I-78 near Port Clinton. I took route 61 north off the interstate, made the sharp right turn onto the dirt road off of 61, and then started to climb all the way (about 700 feet) to the top of the ridge. I parked my car at the head of a trail starting down the south slope of the ridge and paused to read a sign stapled to a dead tree.

I swore out loud to read that they were conducting a study of reptiles and amphibians in that patch of state forest, and no herps were to be collected, molested, or even touched. Rock formations were also off limits since they were important to the study. On a certain level I was glad about the study, and the survey itself seemed to validate my hunch that this would be a good place to go herping. The thought of looking under their cover board arrays did cross my mind, but I respect their study, and I gave up the hunt.

Now while I was pissed off to have driven an extra half hour and climbed seven hundred feet up a steep gravel road in the Ford Contour to find my intended activity forbidden, I was intrigued by the mention of the formations. There are other state forests and state game lands on ridges in central PA, and they can’t all be closed to herping. I think next week I might drive out to the nearest I can find and try the south slope early in the morning. In my relatively brief life of herping I have seen no wild timber rattlesnakes (Crotalus horridus), and now is the season for them to be gathering back at their dens for the winter.