Timbers in the Mist 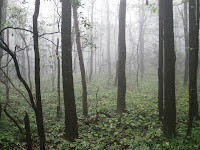 You can't find rattlesnakes sitting in your living room (unless you keep them as pets, in which case the possibility of finding them in your living room is a strong argument against keeping hots), so on Labor Day I got out of bed early, packed my rain poncho, and headed for the mountains. Sunday would have been the better day - lots of clouds but enough hazy sunshine filtering through to warm the skin - but on Sunday I was under the weather, getting over a virus and dealing with my own mental haze and fatigue. I needed my sleep. So, Monday it was.

I hiked the first half hour or so through the rain. I had flashbacks to my June trip on which I hurt my finger (still ain't quite right) and felt really uneasy about exploring slippery talus slopes and rocky outcroppings (think small cliffs). Maybe I should bring my water shoes for this kind of trip, but my hiking boots, in spite of their many other attributes, slide off slick rocks like they're glazed with ice.

I headed directly for an outcropping where, near the beginning of June, I had seen three timber rattlers (Crotalus horridus), all presumably females, basking together in a neat pile with a perfect view of the valley below. They just care about the temperature and hiding spots, but I still imagine them scouting nice rookery spots, and arriving at this one to say, "sure it's a slog to get to, but look at the view!" 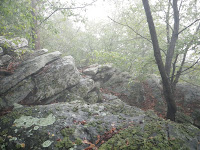 That's what I said, even in the fog that enveloped the mountainside once the rain let up. Of course I was assuming I'd see no rattlesnakes. 'Basking in the fog' is oxymoronic, no? Basking presumes solar radiation to absorb, and the light from my camera flash barely made it through the mists to light up subjects twenty feet away, but somehow, for reasons only the rattlers know, I had subjects to light up. 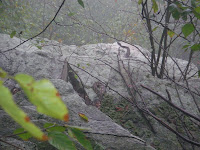 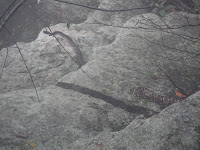 Who am I to tell the rattlers how they should bask? I didn't see the oodles of rattlers I probably would have seen on Sunday (when I would have covered a LOT more rocky ground), but the observation of timbers hanging out in the fog like it was the most natural thing in the world? It kind of works out as a trade.

Look at how huge she is. I wasn't sure if they would have given birth yet when I got out of my car, but I bet she'll be dropping her litter very soon.

After these girls I headed back for the car (albeit by a route that let me check out some overgrown clearings and a boggy area, from which one lonely spring peeper called out into the fog). And, of course, when I got back to the car, the sun burned through, just enough for that warm, hazy light that's 'perfect' for rattlesnakes.

Here are some other tidbits:

A fuzzy caterpillar (there were a lot of these out) that headed towards me ominously as I sat admiring the snakes. 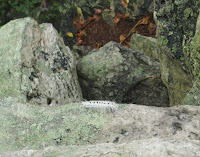 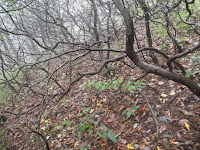 Requisite newt (Nopthalmus viridiscens) in a puddle, since if it's raining in the mountains, you know at least you'll find newts. 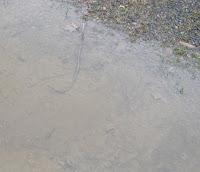 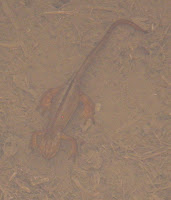 Here are some chestnuts for the tree fans out there: 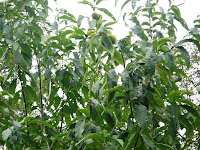 And a bird? This adorable blue-throated, black warbler checked me out as I watched the snakes (first the caterpillar, then the warbler). This was the best photo I took, good enough for my friend and avid birder (and we're still friends - crazy, I know) Tony Croasdale to ID the cutie.