About a week ago it hit me that I haven't paid much attention to my favorite cemeteries for a long time - about a couple weeks, with only one trip to Mt. Moriah in the previous month. I guess this has to do with my injuring my knee, but I'm quite capable of walking around at this point, so on Saturday (June 27th) I made a point of heading over to the Mt. Moriah Cemetery to look around.

The one trip I had made was surprisingly unsuccessful - a morning trip that only turned up a garter snake (Thamnophis sirtalis), which was nice, but it wasn't a brown snake (Storeria dekayi).

I was greeted by walls of green everywhere on that trip - always astounding to see how much the vegetation can grow in such a short time. I had trouble finding some cover objects that had been sitting out in plain sight two weeks before. On this weekend's trip I had the same reaction. All our recent rain has fueled another round of green. Dig these photos of the cemetery: 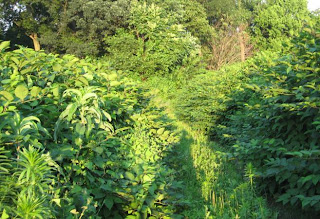 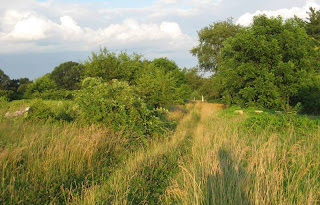 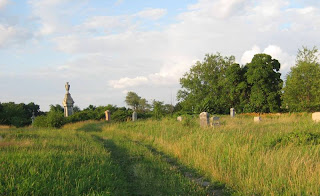 Here's a groundhog that didn't seem to notice me until I got relatively close, but still not quite close enough for a good photo: 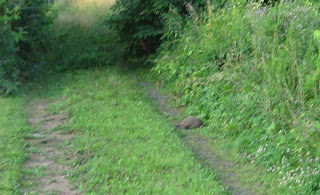 This trip did turn up some brown snakes. I'm still kicking myself over two I let get away; I'm supposed to be good at this by now. My error was in lifting a rock with one hand while still holding my potato rake with the other, so that it wasn't free to grab the two plump females before they could disappear into the high grass. When you're looking under cover, even if it's the 100th object you've lifted, make sure you have one hand free.

Here's a nice little one that I did manage to get my hands on, and for some reason Blogger insists on rotating it 90 degrees: 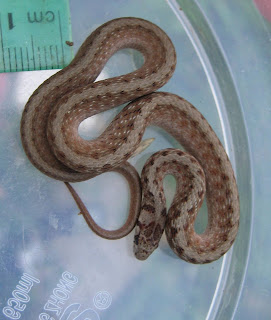 I was happy to find the four brown snakes, but more interesting to me were the four garters that I saw. I only saw one in two years of herping the cemetery, but this season they're everywhere. I should start marking them too. I'm not sure why I'm seeing more - it could be random luck, it could be that the wet year is encouraging them to come up from Cobbs Creek, it could be a good year for the night crawlers, who knows.

Like all good garter snakes they gaped and bit with vigor, smearing me with feces and musk so I could smell them for a day after. 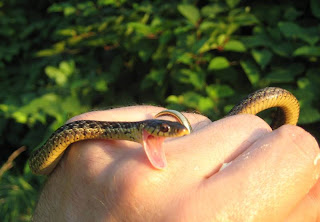 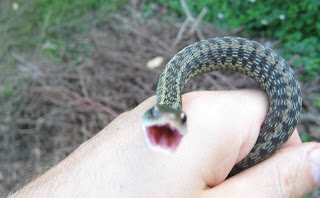 The other cemetery I frequent is the Woodlands, between the tracks along the Schuylkill and where the trolleys go underground around 40th and Baltimore. I run there (or ran) weekly, and each time I'm there I stop and flip cover for brown snakes. I've been seeing them pretty consistently, so on Sunday, still sidelined from running, I decided to go on a walk there instead, and this time with a camera to snap some photos of those brown snake regulars.

Of course I didn't see any to photograph, but I did come across a deer. This is interesting because up until recently (I forget if it was last year or the year before) there was a stable little herd living back there. They were quite pretty, and it was fun to spook them on my runs. Still it was not a good place for deer, and as they multiplied I was sure they'd strip the cemetery of all leafy vegetation and at some point crash through a windshield on University Ave. Apparently the cemetery management agreed and culled the deer. I had heard rumors it was going to happen, and then one morning there were no deer.

This doe was oddly tame (just like her predecessors). I'm used to deer fleeing as soon as they see me, but she kept watching me from about thirty feet away. I worry that someone is feeding her - a setup for the whole cycle to repeat itself. 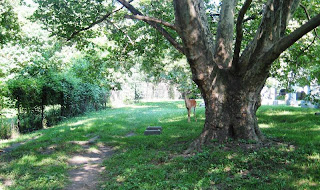 Posted by Bernard Brown at 6:22 PM No comments: