I went back to our big brown snake (Storeria d. dekayi) site, which is a little bit of an addiction now. I need to check out more sites around , especially some milk snake (Lampropeltis t. triangulum) spots I’ve learned some more about, but now there’s a real plot to the brown snake vacant lots, and it keeps pulling me back.

There is a difference between just visiting a place once and seeing what you can find and getting to know a site and following it through the seasons. Usually people say that in reference to some rare or important species they’re studying, or they’re talking about their garden or some other conventionally romantic outdoor space.

Of course I’m talking about an abandoned industrial lot where you can only find weeds, trash, and common, unexciting brown snakes, also-founds of the herping world. That said, now I’ve found them gravid in the early summer, newborn in the late summer, migrating from their fields back towards their hibernacula in the fall, and massed together, hiding from the frost in the winter.

I’d like to complete the cycle and see them through back through the summer. I figure they’ll head from the hibernacula back into the fields and mate, though maybe in the reverse order, and by June I’ll be seeing those gravid little females again.

Of course the sub-plot is about the construction. The orange flags went up last summer about when the giant metal beams started appearing on huge wooden pedestals (the photo is from when they appeared this summer), but they’ve finally started building on some adjacent land. I noticed this on March 11th when Jen turned up the 87-snake hibernaculum, but when I went back on Tuesday the 27th the field they’re working on was heaped up with mounds of earth. The signs are still up saying that the fields where I’ve seen the snakes are still available for construction, so I figure my friends are safe for a few more seasons, but I figure the rest of the land will be paved over once the Lowe’s and the rest of the planned shopping center is up. 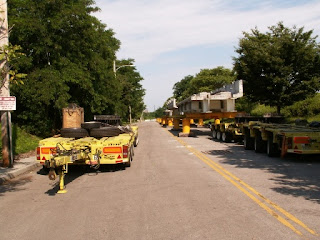 I was driving by the lots on Tuesday, so I stopped by to check on how everyone was doing. It had been consistently above freezing for a week and half, and it was all the way up to 80 on Tuesday (75 degrees when I stopped by around 6:30), so I was thinking the snakes might be starting to spread out from their den.

Maybe they are spreading out, but I didn’t see any snakes at all. I lifted the railroad tie that had sheltered the 87, but didn’t see a single snake underneath. I checked the door, more railroad ties in the area, and other debris, but I found absolutely nothing.

If they’re spreading out, then they’re avoiding cover that seems obvious to me. Maybe a more likely explanation is that we spooked them and that they’re all deep under larger debris I can’t get under.

Getting skunked on Tuesday makes for a nice segue into the update on our trip to . Well, there’s not much to report. We did see a few lizards and some amphibians, but not much more than any tourist would see walking around and being a good tourist in . I do have some photos, and I’ll get the information up eventually, but I’m hoping the season picks up here soon so I’ll have more exciting stuff to write about.

Posted by Bernard Brown at 5:41 AM No comments: