How are brown snakes (Storeria dekayi) different than timber rattlesnakes (Crotalus horridus)? Go ahead and start listing all the ways, but one of the most important from the perspective of someone searching for both is in basking behavior.

The timbers with which I’m now pathetically smitten spend a lot of time sitting outside in plain view of the whole world, soaking up the sun and quietly asserting themselves to any predator that might make a bad decision. True, humans take advantage of their public basking to massacre them, and maybe there are eagles somewhere that will pluck a full grown rattler from atop its favorite boulder, but in general the timber rattler has little to fear in the forest around it, little reason to hide itself while it’s trying to absorb some of sun’s gift of warmth.

Brown snakes, by contrast, are afraid of everything. A big spider is a threat, as are shrews and everything else on up the food chain. I have heard of a brown snake being found in a meadow, coiled in a tiny patch of sun penetrating the thick grass above it. I’ve only come across one in the open, and it seemed to be crossing a path at dusk. More typical is for a brown snake to warm up under something that does it the favor of passing along heat while simultaneously keeping it out of sight of all the scary beasts that could gobble it up in a heartbeat, like robins.
Last weekend I took Eitan and his daughter Shoshanna to Mt. Moriah cemetery to show them some urban herping. We turned up a bunch of redback salamanders (Plethodon cinereus) under trash, and then I showed them where I think the brown snakes are hibernating. It's a retaining wall around an elevated plot, exposed to the sun. Just like last year I fretted over how the spot has no cover (no rocks, logs, bark, trash) under which to find the snakes, so I couldn’t actually access them in their den. 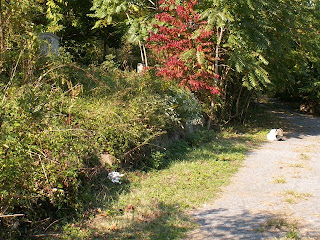 Last year Jen found one solitary log to look under and found two neonates. This time I was still frowning when Eitan reflexively stooped and grabbed at something about three feet to my left. He came up with three brown adult brown snakes, and my jaw dropped open. They were just sitting there on a patch of bare earth, basking exactly where I knew they weren’t supposed to be. A moment later Shoshanna shouted that she had found one as well, this one sitting on a stone step maybe ten yards away. Here's a shed from one of the steps: 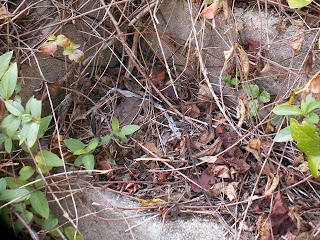 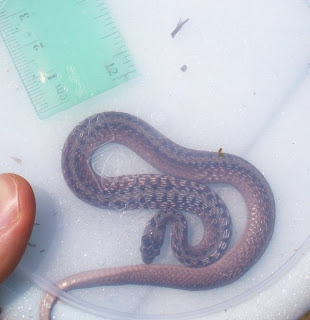 Earlier that day I’d had about the opposite experience. Vivianne and a group of boys with whom she volunteers walked with me to the Mill Creek Farm, where I was sure I could turn up some snakes. Each time we go out they talk about how they’d love to catch snakes, especially anacondas or pythons (it can’t hurt to dream), but the places I’m most likely to find brown snakes are where I’m least comfortable taking a group of boys – vacant lots and cemeteries full of broken glass and boards with rusty nails that could punch right through an unwary foot. The brown snakes of the Mill Creek Farm made a fool out of me there too, this time by staying no where we could find them. I think I made up for the failure by taking them back to our apartment to see the turtles and snakes; even if my ratsnakes aren’t pythons, they still make for nice showpieces.

Posted by Bernard Brown at 2:40 PM No comments: