Maybe it's because I wonder if I actually am a little nuts, but I was delighted and relieved that Scott had at least as much fun as I did snorkeling for turtles last weekend. (he may kill me for posting this shot - needless to say this is a man who takes advantage of all the sunblock he can find.) 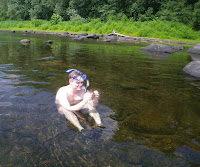 We only caught one, or rather Scott did, hollering out (you have to holler loudly when your herping buddy's ears are under water) that he had caught one on our first, slow drift down the Delaware. when Scott caught his first snorkeled map turtle (Graptemys geographica). He had seen the turtle surface for a breath, then dive at the sight of the giant monster floating towards him. Like many small (young or adult male) map turtles, it didn't swim away. Instead it headed for the biggest rock it could find and tucked itself down on the downstream side. We watched it do the exact same thing when we released it. 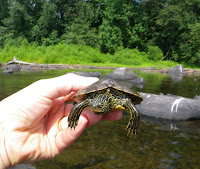 Again, these are river turtles that are probably not native to the Delaware River system. They were apparently released about a hundred years go around Yardley, PA, and have spread out from there. We've seen them in the Schuylkill, and they've been documented as far up as Valley Forge. These 'common' map turtles have a huge range in the northeastern United States, but as you move south you find that almost every river flowing into the Gulf of Mexico has its own species (some lucky river systems have two - one species in which the females have big heads and eat lots of mollusks, and another species that has smaller heads more suited to insects and soft-bodied invertebrates)

I've posted before about my love of snorkeling for turtles before (here is one post from last year, one from this year) - the playing in the water like a kid again, the heavenly drifting with the current, immersed (literally and figuratively) in another world. I won't babble on about it here, but instead I'll put up the photographic once-over of the turtle Scott caught. 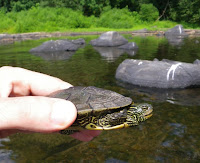 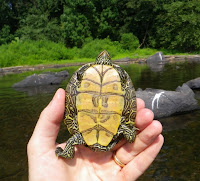 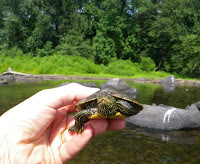 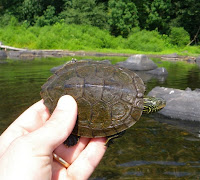 We tried to go after a big female we saw basking, but after ten minutes of slow, upstream stalking she got away.
Posted by Bernard Brown at 6:30 PM No comments: