January 23rd seems really far off right now, but it's only about a month away. We've got our next public Greater Philadelphia Herpetological Society meeting scheduled for that evening, and I've posted the content of the flyer below. If you'd like to come and you have any wetland species as captives that you can bring in as show and tell (let's abide by all applicable PA laws, but I figure a policy discussion might bore any kids who come, but that some critters might help keep them engaged and connected with the discussion) please let me know.

From the East or West: PA Rte 3 (West Chester Pike) to PA 320 (Sproul Road), South to the "T". Enter parking lot just past police station or turn left on Sproul and take your next left to get to the other parking lot (on the right).

There is a parking lot around the Township/Library Building and one just to the east of the building. Street parking is possible on Sproul Road from the Police Station north.

Refreshments will be served. While there is no admission charge, there will be a voluntary collection to cover the speaker's fee and other expenses.

Posted by Bernard Brown at 7:00 AM No comments:

On the 23rd Jen and I are flying down to Atlanta, GA for Christmas with her family. I look forward to posting the results of whatever light herping I do down there in a few weeks, but I thought this made for a convenient point to post some finds from a trip we took down there in September.

Jen's family lives in Roswell, a suburb to the north of Atlanta, and their house backs up against a wooded ravine with a brook at the bottom. There are some parks we like to go to around there, but the ravine out back is always the first herping stop (although Jen also likes to stalk the American toads - Bufo americanus - that hang out under the lights in the house driveway at night to pick off moths drawn in by the lights).

I've found dusky salamanders (Desmognathus species) under rocks in the brook several times, but I am embarrassed to say I've never difinitively IDed them. I usually take a photo to look at later, and then realize the photo I took is too blurry, too dark, or captures the wrong part of the animal to help me identify it - for example the belly color is often a feature used to ID critters, and I keep forgetting to take belly photos.

Here's one of these inadequate photos. I never should have taken it against a white background. 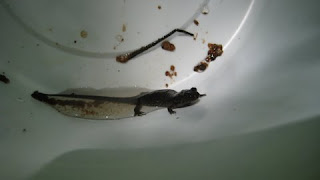 One September 13th we found some critters we could ID, box turtles (Terrepene carolina)! Jen and our niece Mariana found them in the shallow water of the brook (it was 3pm, 85 degrees, and humid), apparently mating. I thought September is the wrong time of year for that, but the male was on top of the female. He fell off when Jen and Mariana got close, and they brought the happy couple up to the deck for a photo session.

The hard part about taking photos of box turtles is trying to get a shot of them with their heads and legs out - they're shy and want to stay shut up as long as you are watching. We even tried ducking back in the house for a moment and watching through a window, but then the female started scooting off, and we had to run back out so she wouldn't take a jump off the deck.

Here's a shot of me wrangling them: 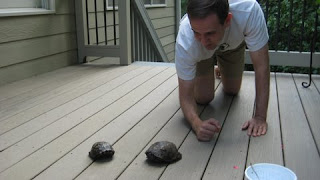 Here's a shot with the male with his head out and the female just barely opening up. 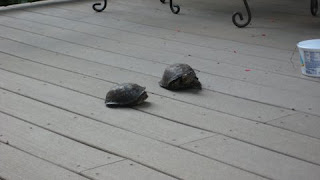 Here's the release shot, with the pair back in the water where Jen and Mariana found them. The male is the larger one. I found their coloration interesting - both with very dark, almost black backgrounds and the light yellow markings. 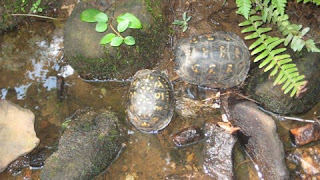 Posted by Bernard Brown at 7:14 AM No comments: