The cold wind blows and it's been too long since I've found anything besides a red-back salamander (Plethodon cinereus).

We've got two days to the shortest day of the year, before the sun mounts its comeback. I could do an end-of-the-year roundup, but the calendar year ain't quite over yet - I could flip some interesting amphibians in Atlanta this Christmas, and we might luck out with a nice salamander-rich rain after I get back, so I'm dredging up a report from beyond my usual stomping grounds this summer.

Readers of this blog are probably familiar with my love of aquatic turtling - diving into the water with my mask and snorkel and looking for them in their terrain. This is not an original technique. It might be less popular than road cruising or flipping AC (artificial cover), but then herpers tend to be a lazy bunch (that's right, brothers, I'm calling you lazy (there are few sister herpers, and my sense is that they might work a little harder than the boys.)), but you'll see it pop up now and then on Field Herp Forum and in scholarly papers that report collecting aquatic turtles by snorkeling or wading.

I had spoken with a herpetologist from Central PA who catches map turtles in a river towards the middle of the state, and after letting one summer drift by without making it out there, I resolved to make the drive in 2010.

It was early September when I got there, a little too early in the morning still for jumping in, with mist on the water and temps in the low 70s. I saw a couple turtles basking on a rock in a patch of sun, and one more swimming around at a fishing/boating access parking lot. 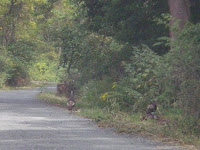 (here are some of the local turkeys)

On my way up a rise in the road I noticed a blue pickup truck in my lane. I slowed down, and the truck pulled back into the correct lane but paused. Maybe it was too early for my brain to put it all together right away, but my next thought was, 'Oooh! Is that a rattlesnake? Oh, it's an enormous copperhead (Agkistrodon contortrix)!'

I still wonder what I would have said if the DB in the truck had lowered the window or if I'd gotten there thirty seconds earlier, in time to stand in front of that snake with my potato rake and guard it across the road.

Whatever I could imagine, that snake was road pizza by the time I got to it. There was nothing to do but jot down the coordinates and temperature and hop back in the car.

The herping gods rarely show compassion, but maybe this is such an instance. I was feeling pretty demoralized by one of the worst possible omens to start a trip, when I saw the most beautiful road cruising vision possible.

It was a black rat snake (Pantherophis obsoleta) stretched half across the road. 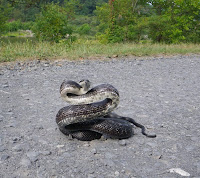 I got down to her level for some photos, including the classic reared-up rat snake pose, trying to look big and tough in the face of a strange monster that poked a large glassy eye in her face. 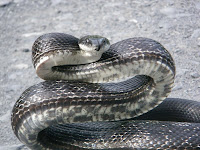 I kept her attention on the camera and reached around to pick her up from behind. Pretty soon she was slowly exploring - not biting or whipping around, but not exactly sitting still for any more posed photos. 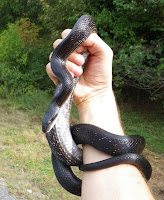 I could have spent all day like that, but I had turtles to catch. I had a hard time figuring out the best place to hop in.

Another snake showed up on the light gravel as I doubled back down the road, this time a garter (Thamnophis sirtalis) 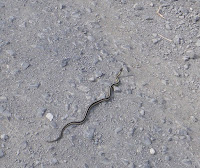 This is about as close as I got to any basking map turtles (Graptemys geographica). 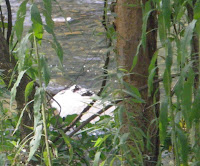 Time after time I parked, scrambled down to the river and got in. I worked upstream, poking my head into brush piles and downed branches in the water for males (not finding any), and struggling to find the deep holes where I expected the bigger female turtles to be. 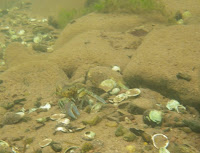 They uniformly faced me bravely with claws ready to do battle, and then (I suppose) cheered with triumph as the enormous four-limbed monster drifted on. 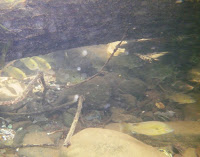 ...and another garter snake, this time exploring a snag. 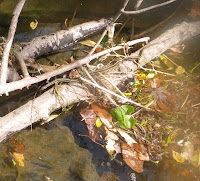 This is another one of those stories that ends, "and then at the last spot I checked..." as much because I wasn't going home until I found a map turtle as because of the luck of the day. In other words I would have gone home maybe an hour earlier if I'd found a map turtle at the previous spot. 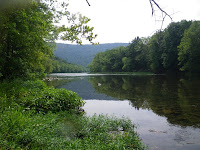 What a beautiful river. It was a pleasure to even strike out to that point, to drift along, nestled between steep mountainsides with lush green banks to either bank.

What gave me hope was that I had finally found some deep holes, a stretch of river where the boulders and gravel went suddenly from knee-deep to way too far to reach even tippy-toes. I feel a sudden fear of falling in those initial moments, as if I need to brace for impact, before it occurs to me that I'm floating.

From there it's a dream of flying, the noise of the world muffled by water in my ears and the river bottom scrolling by in muted shades of green. There are monsters down there - here a muskie the size of my leg. 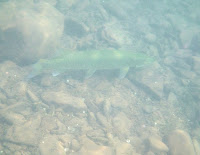 And finally, nestled in the downstream space under a boulder... 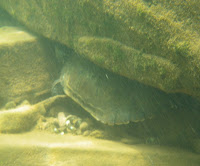 I got a good grip on her and got her above water for a few shots. 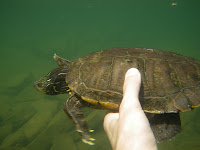 Note the puny tail on such an otherwise hefty turtle - another sign it's a girl. 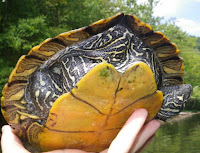 I've still got this next shot on the wallpaper for my work computer. The closeup exaggerates the size of her head, but rest assured she was a bruiser. These map turtles are strongly sexually dimorphic (here's a post from last year showing a male and female together). The females are hefty turtles with broad, strong jaws for crushing snails and mussels. The males are half their size, with narrower heads suited to smaller, flimsier prey. I took the message of those opening jaws to heart and let her go. 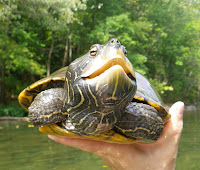 I conclude this post by looking out at the cold sky, dark disgustingly early, and know that it's at least four and a half months until I can catch these turtles again. Winter sucks.