I had almost dug out the rat snake when I remembered the large tree trunk above me. I was breaking away chunks of rotting wood in an effort to uncover the rat snake that Jen had spotted with her amazing eye for herpetological detail.

We were in South Carolina, in the eastern section of Francis Marion National Forest. We were down for a wedding in Charleston, and we decided to drive down and make a little vacation of it once we realized how expensive it would have been to fly to Charleston directly.

Anyhow, here is what Jen saw - the nose sticking out of this hole in the stump. 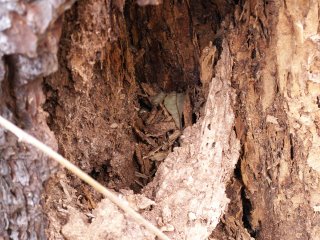 After some peering down in there, I decided it was a ‘greenish’ rat snake (Elaphe obsoleta obsoleta x quadrivittata), an intergrade between the black rat snakes (Elaphe o. obsoleta) that we have up here in the Northeast and the yellow rat snakes (Elaphe o. quadrivittata) that rule the southern coastal plain. The black rat snakes are usually solid black, the yellow rat snakes are yellow with black lines down their backs. When they mix in the wild the product is a dirty-green snake with thick black lines. These have a reputation for being ugly to look at and mean to handle.

I wanted to see more than the nose of this snake, but when it occurred to me that I was tearing away at the vertical support for this tree trunk (please excuse the smaller tree I somehow managed to catch in the foreground), I stopped. 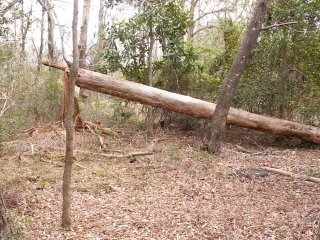 We decided to go look around elsewhere and come back when the snake had had some time to calm down and come back out to bask. This is the view we found when we returned. 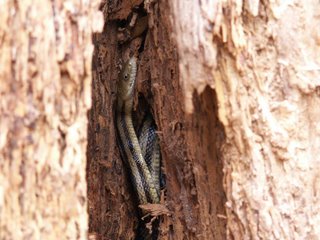 Jen rates this find second only to the scarlet king snake (Lampropeltis triangulum elapsoides) she found in Alabama four years ago.

Here are some other highlights of the trip:

This is another of the ambystomid salamanders, a Mole salamander (Ambystoma talpoideum). These are usually deep underground, so I was surprised to find it under a log. 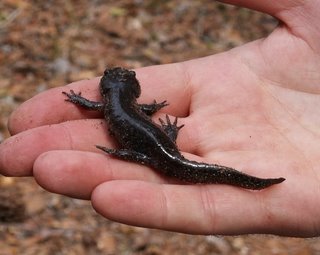 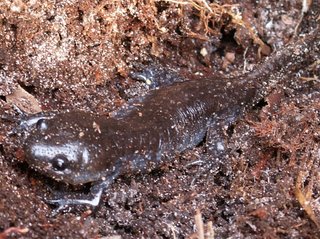 Here is a tiny ground skink (about three inches) we found elsewhere in the forest. These live in South Jersey too, but I’ve never found one there. 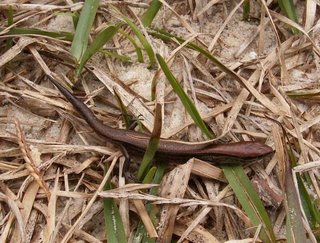 Here is a really special sight: a bunch of salamander larvae (each about 1/4 inch) hatching out of an egg mass in this wet spot in a right-of-way. These eggs were laid by some salamander (perhaps a mole salamander) a few nights before. 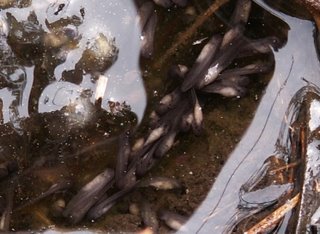 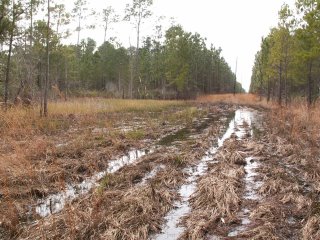 I scooped these tadpoles (each about one inch) out of one of those puddles. I don't know what kind of frog they'll grow into. 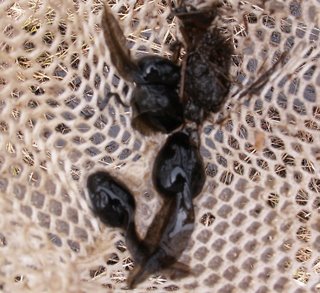 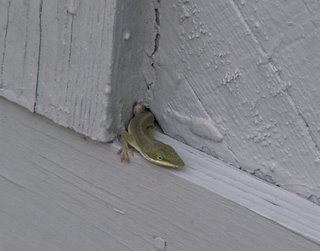 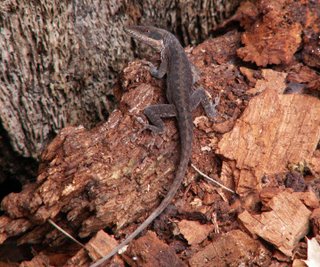 Here's an interesting anole behavior we saw close to Myrtle Beach. Anoles sleep on twigs at night, and here is one getting ready to go to sleep a little early (around 5:30 pm). It was still light out, but when I got close the little guy did not jump but just hugged tightly to his twig. 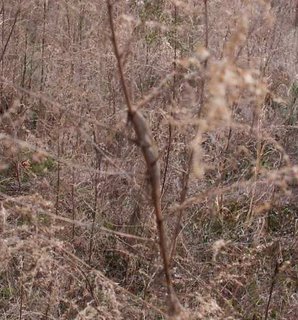 This is either a young southeastern five-lined skink (Eumeces inexpectatus) or broad-headed skink (Eumeces laticeps) that we found near Myrtle Beach. They look about the same, and this one was too small and squirmy for me to feel like counting scales to be sure of the identification. 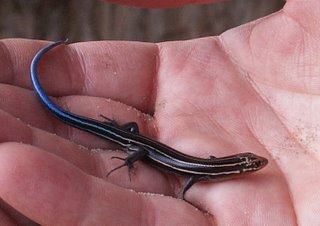 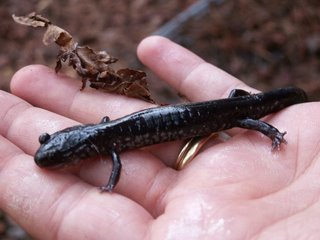 We found the skink and the anole on the twig near Myrtle Beach on March 9. The temperature was about 65 degrees. It had been partly cloudy and relatively dry that day. In Francis Marion NF the temperatures were in the low 70s and the skies were partly cloudy.

Last week this is all I found: 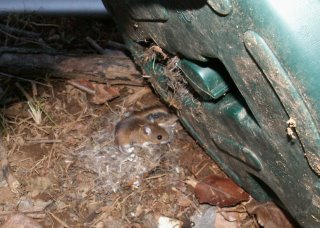 These were not herps, but they were pretty cute. This might be my greatest flaw as someone who loves snakes: that I am almost as enamored of their prey.

To be fair, I also found centipedes, beetles, roaches, and worms. I saw many robins, vultures, English sparrows, and even a red-tailed hawk. All these, though, are so common that to say that I “found” them would be like saying I found a telephone pole outside my apartment building on Spruce Street.

These mice, by contrast, are a special find. I lifted up this discarded base of something, and there they were, quivering and staring at me with those huge, liquid eyes.

I found them behind a hotel in State College where I was staying this week for a meeting. I had checked out the area on my Google Earth (my new best friend) and noticed some green space around the hotel, much of which turned out to be a few acres of marsh with a stream winding through. Unfortunately the weather had been dry and cold, and I was out poking around as the sun was going down and the temperature was falling.

I also went out scouting Saturday morning. Google Earth revealed to me just how over-grown the cemetery is south of Baltimore Ave. along Cobbs Creek, and that the creek would be worth exploring down there as well as around the Cobbs Creek Community Environmental Education Center, where I spend most of my time along the creek. Sure enough, this area looks like fun.

There are logs and trash galore, and I would expect the usual suspects there in the Spring.

I was, though, quite unsettled by the cemetery. I usually love cemeteries. In my senior year of college I lived next to the gorgeous Indian Hill cemetery, in Atlanta I spent a lot of time in the Oakland cemetery, and here in West Philly I have fallen in love with the Woodlands, the cemetery just south of where the trolleys go underground on Baltimore Ave. I have enjoyed these cemeteries' open grass shaded by well-spaced trees, many of them huge, majestic centenarians that radiate peace and calm. Few other people seem to like hanging out in cemeteries, making them fine places to jog, stroll, or bask without cars whizzing by or kids shouting. I like people, of course, but sometimes it’s nice if they all lie quietly and stay out of sight.

This Southwest Philly cemetery, however, was a mess. Many markers were off their bases, several sections have been taken over by weeds and tall grass, and people have even been dumping their trash in the cemetery. This took me quite aback. It’s one thing to dump trash in a vacant lot or out in the woods. That’s illegal, lazy, and gross. Dumping your old mattress or piles of boards on top of someone’s grandmother’s eternal resting place, however, strikes is a disgusting insult to the dead and those who remember them.

The problem with this cemetery, I guess, is that few people are remembered there. I will return there to look for critters and perhaps to jog, but I have made a decision to try to clean up a little each time I go back, to pull the trash from the graves and pile it neatly on the edges of the paths, if nothing else.
Posted by Bernard Brown at 4:53 AM No comments: