On Saturday I picked up a garter snake (Thamnophis s. sirtalis) and a black rat snake (Elaphe o. obsoleta). Both musked on me, but neither bit me. 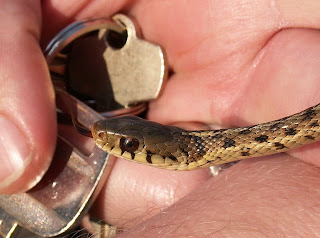 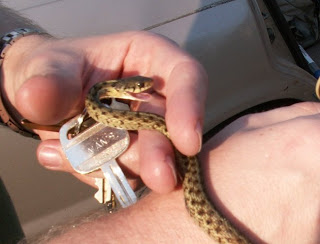 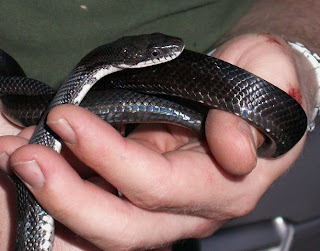 Scott didn’t make out so well. He caught two black racers (Coluber c. constrictor) and one red-bellied water snake (Nerodia e. erythrogaster), all three of which enthusiastically drew his blood (the racer gaped at the camera each time I snapped a photo). 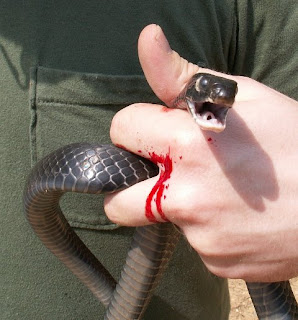 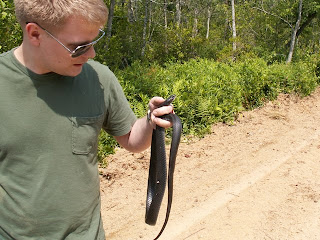 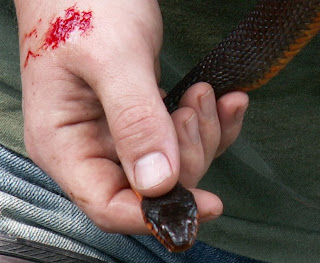 Small garter snakes have small teeth and never cause very much damage, and neither do small black rat snakes. I haven’t had much trouble with even big rat snakes. They rear up and hiss, maybe even lunge at you, but once I gently pick them up they calm down. If they attack anything at that point, it’s the camera (the gigantic eye! Look out! It’s focusing!).

Racers, unless they’re cold, almost always bite and bite hard. Unlike rat snakes, which kill their prey by constriction, or copperheads (Agkistrodon contortrix) that kill with venom, racers overpower their prey with the strength of their jaws, so they’re especially good at chewing hard on you.

Water snakes are also champion biters. They overpower their prey with a mix of jaw strength and toxic saliva. You could say that they’re venomous, since their saliva is toxic to their prey, and when they bite you it has a mild anticoagulant effect (so you bleed a little more than you expect) and causes a little swelling. They’re really not that dangerous, so it’s hard to lump them together with the copperheads and the other genuinely dangerous species. Still, they make you think twice about catching them.

Scott sustained other minor injuries while catching the first of those racers. We found all the snakes except one the racers (which we found under a board) crossing the road in front of the car. 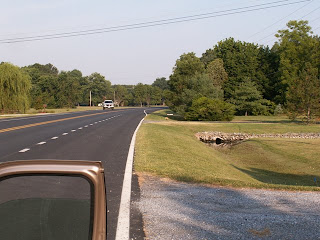 Scott spotted the first racer on a dirt road running through a marsh we were about to explore for turtles. We skidded to a stop, Scott jumped out, and he slid as he snatched up the snake before it could get off the road.

We debated whether we should take a photo of the scrape on his butt to go with the pictures of his bloody hands, but it got dark before we settled the topic.

We did make it into the marsh after the dramatic racer capture. Scott netted one of the painted turtles (Chrysemys p. picta) we had seen basking. Here she is. These guys are so common I sometimes forget how pretty they are; you can see why they’re called “painted” turtles. 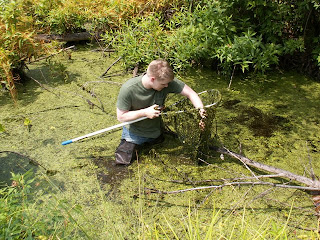 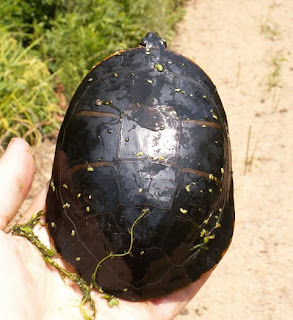 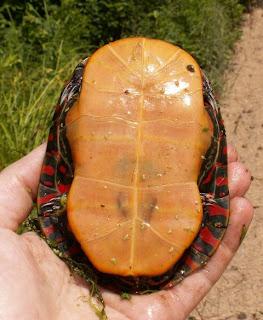 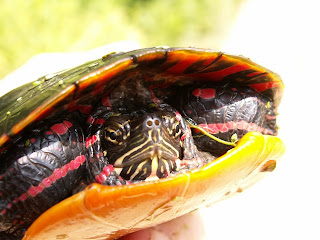 While I was wading around in the water and duckweed trying to find my own turtle I noticed that every few seconds the water would boil up in little spots around me. I couldn’t see what was doing it because of the duckweed, but I scooped the net around and pulled up a few very large tadpoles that I assume are destined to become either bullfrogs (Rana catesbeiana) or green frogs (Rana clamitans melanota).

We hopped into the water at one other spot, a small, murky pond in which we’d seen some painted turtles basking. Scott, who was in the water before me, spotted the red-bellied water snake, watched a large bullfrog hop across the snake, and then managed to grab the snake before it escaped into the water to hide in the mud. Here I am taking a look at the snake. 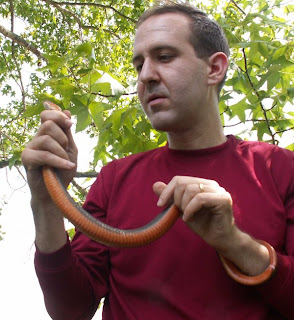 We didn’t catch anything else. The water was too murky and the mud too thick at the bottom to slip on the mask and swim after the turtles, and wherever we were, they stayed on the other side of the pond, watching us warily. We did see a lot of frogs – bull frogs, green frogs, and leopard frogs (Rana utricularia), a trio of species we saw a lot of that day. I also caught a glimpse of small stinkpot (Sternotherus oderatus) running along the bottom in a shallow section and then disappearing in a puff of mud. 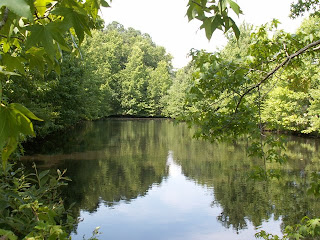 If you’re familiar with the herps of the you might be wondering where we were catching a red-bellied water snake, which is a species of the Southeast, not our side of the country.

These pretty snakes do make it up to the southern part of the Delmarva Peninsula, and that’s where we were – in and around the Blackwater National Wildlife Refuge south of .

I’m still not convinced that Blackwater is worth the drive. The area does feature copperheads and supposedly higher populations of eastern kingsnakes (Lampropeltis g. getula) and corn snakes (Elaphe guttata), and a few frog species we don’t see in our neck of the woods, but we’ve got our own special frogs, corn snakes, and kingsnakes in the Pine Barrens, and copperheads just over in Valley Forge.

Last weekend (July 13th and 14th) we had planned on joining Scott and Caroline at Scott’s family’s cabin in upstate PA, but those plans fell through, and since I had blocked off the weekend anyhow, I had less of a problem than usual with driving three hours each way for a 21 hour herping trip to the Blackwater NWR area.

I did have trouble with the flies. I think I got mobbed by at least three species: deer flies, a horse fly, and then a green head. They didn’t bother us too much when we were actually in the water, and we managed a walk at dusk without getting driven back to the car, but I do think they’re a great reason for sticking to the upland habitat. 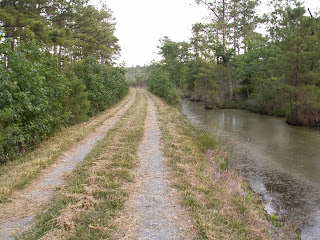 I don’t think I’ll be managing any big herping trips for at least a couple weeks, and this is probably a good thing. I’ve been trying to think why I was out on little trips so much more last year and the year before, and I think it’s because I’m not digging worms for snake food anymore. I do hope for a little bit of backyard and suburban herping in the next few weeks, so stay posted.

The temperatures on July 14th south of Cambridge, MD ranged from the low 70s around dawn up to the high 80s in the late afternoon. It was consistently sunny and humid.