I have been procrastinating about posting the finds from our honeymoon in Brazil for two reasons. One is that I am a bit embarrassed by how little I found. There are several reasons why we got skunked, to use the official term: there was a drought where we stayed in Bahia, and droughts frequently keep herps inactive; we were on a honeymoon, and we focused on activities other than herping, such as swimming, horseback riding, kayaking, sightseeing, and other touristy stuff; and we did not pick as bio-diverse a honeymoon spot as I had initially though.

The other big reason I’d been procrastinating was I was worried that after I post these finds, I might not have anything left to post for the winter. However we’ve been having warm weather so far this winter, and I’ve discovered the joys of winter salamandering. I had been thinking about trying to stretch out the honeymoon into four or five posts, but I think I'll still have enough material to carry my through the winter if I cover the honeymoon in three: the lizards at Jocotoka (the resort), our trips elsewhere in Bahia, and our hike in the Tijuca park of Rio de Janeiro.

Oh, one more reason for procrastinating: poor photo quality. We had major camera difficulties in Brazil, and while I'm not a photographic perfectionist when it comes to herping, I am embarrassed by these. Unfortunately they're what I've got, so please be kind.

I’m not a big fan of invasive, exotic plants and animals, but these guys were entertaining. I’m pretty sure they’re Hemidactylus mabouia, a gecko native to Africa that has colonized nearly every human-inhabited tropical place on the planet. They’re usually called ‘tropical house geckos,’ because they live around houses almost everywhere in the tropics. Wherever you go from South Florida to southern Africa to Australia, you will find them or a close relative hanging around lights to pick off the moths and other insects that can’t help but flutter on in. I had assumed that they are exotic but not invasive. There are many species that naturally inhabit environments that are similar to the environments we create. These do well wherever we go, but often don’t go any further. Pigeons are a good example. You see pigeons (more properly called rock doves) all over cities because they naturally inhabit rocky cliffs and eat grass seeds. Flying around cliffs and pecking at grass seeds is a life not too different from flying around buildings and pecking at crumbs. Pigeons don’t displace any native wildlife in most places because most places don’t have wildlife native to cities.

I had assumed that the tropical house geckos are similar, that they’re good at ambushing bugs around lights on buildings and do not get much beyond modern human habitat. However R. D. and Patricia Bartlett in their Reptiles and Amphibians of the Amazon comment that they have been known to hurt populations of smaller geckos, so I guess they’re not so benign.

Since most geckos are nocturnal, we had to wait until the evening to see them. At our resort we stayed in a sort of luxury cabin and ate meals at the main building. The first gecko we saw was inside our cabin. We entered and flipped on the light to catch it frozen a few feet down from the hole in the ceiling from which the ceiling fan dropped. Every time we came inside it stayed still until we moved close. Then it ran up and through the hole.

We soon found another gecko living on and around a wall on the inside of the cabin. We named it Side Gecko. We started referring to Ceiling Gecko by name to differentiate the two.

It was not long before we found a gecko that kept to the top of the wall (the walls in our cabin did not meet the roof) to the left of our front door and above the light next to the door. If we came too close it would run inside, and if we tried to come at it from the inside it ran outside. We named it Front Gecko. 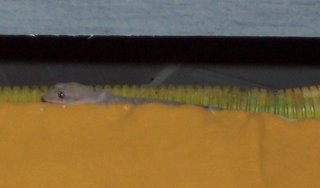 A few times I spotted a very small gecko on the inside of the cabin either on the floor or on the wall next to the door. I named it Baby Gecko.

The last geckos we found around our cabin lived in the light fixture on the front of the cabin, the one above which Front Gecko lived. I was a little surprised by this choice of a home – it just seemed way too bright and way too hot for a gecko, but there they were. I suspect that they came out of the fixture when we were not around, but they were in there whenever we looked. 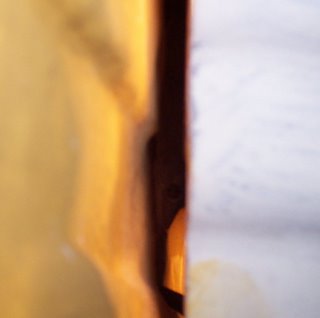 We spotted geckos everywhere there were lights, not just in and around our cabin. Here is a picture of a gecko inside a lantern at the main building. 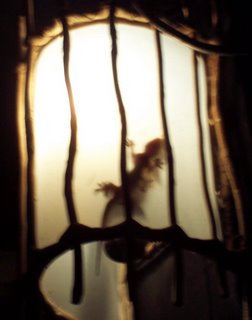 The last photo is not a herp, but it is a cool shot of something else hanging around another lantern. 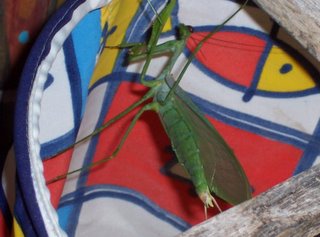 The other group of lizards that ruled the Jocotoka resort was Tropidurus torquatus, a species for which I have found no English common name. I haven’t even been able to find decent photos on the internet, and I’ve only been able to find a couple websites discussing them in Portuguese. I can’t tell you how frustrating that is – to not be able to find information on a species. I’m so used to the United States where we have great guidebooks, lots of herping enthusiasts, and scientists studying almost everything. There are no guidebooks covering the herps of Bahia or Rio de Janeiro, I have been able to find very few herping enthusiasts in Brazil, and there just aren’t as many colleges and universities in Brazil and thus fewer professors and grad students doing field work.

Anyhow, these were fast, active lizards. They stayed on the ground or close to it, in contrast to the geckos, which stayed up on walls and ceilings. These Tropidurus torquatus sat somewhere in the open, presumably to help them spot insects to snap up, to ward off competitors, and to attract mates.

The smaller individuals were strongly patterned in brown and lighter tans and grays. 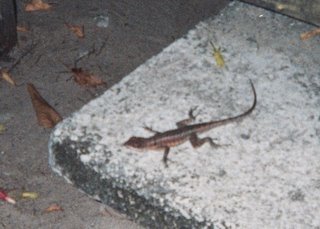 The bigger they got, though, that pattern faded so that the largest (maybe 10 inches) were a really pretty gray with shades of pink and green and a faint, fine, wavy pattern. 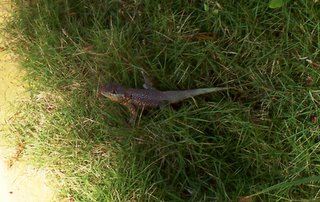 All, though, had a strong black spot/dash marking at the base of the neck right above the shoulder. This species is part of the iguana group of lizard families, and I am assuming they follow the usual iguanine pattern of the males being the larger, more colorful, and more visible sex.

These guys displayed to the other lizards by sort of bobbing their heads and doing pushups. I could swear that they displayed towards me too; more than once a big male looked right at me and did some pushups – a lizard way of showing off to the slow, clumsy herper.

I’m not great at catching lizards. I think I’m a little too shy about squashing them. It usually seems that to catch them I need to move my hand too fast to avoid crushing them when my hand makes contact. Lizards are usually a lot less fragile than they look, though, so I need to work on overcoming this misperception.

There are other methods of catching lizards that don’t require quickness, and my favorite is noosing. Noosing sounds awful, but it’s probably the most pleasant method for the lizard. What you do is tie a noose made from string, fishing line, or fine wire to the end of the stick, lower the loop over the lizard’s neck, and pull up. It can be a little tricky to get the noose off, but otherwise it's a blast. I got pretty good at noosing the brown anoles (Anolis sagrei) that live near my grandparents’ condo in Florida, but I failed miserably with the lizards in Brazil.
This is a picture of me trying to get one on a tree trunk. Anyone who knows something about noosing lizards will recognize that this is nearly impossible. What happened here is that the lizard had run up the tree, I had the noose, and I thought I’d give it a shot. 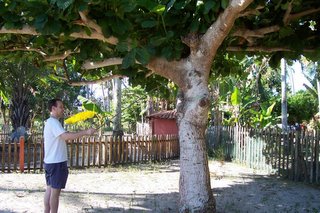 I'll close with some more 'habitat shots.' This was a honeymoon after all. 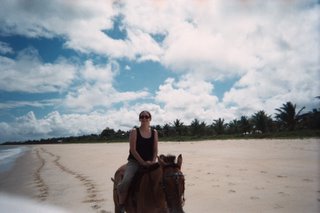 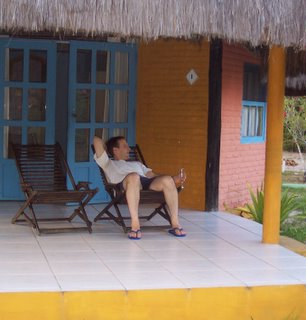 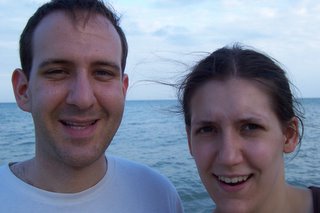