I suppose I could drive up to the mountains again soon, and I probably will, but my inclinations have swung me around to local herping this fall, the short trips where it takes me a half hour to get there and I don't have to carve out big chunks of my schedule to make it work.

I've heard about Carpenter's Woods for years now - a small branch of park along a stream in Mt. Airy that sort of connects down to the bigger trunk of the Wissahickon. It's a local hot spot for birders, and Scott goes there often with Miles to hike around and flip rocks for salamanders.

The creek emerges from a storm sewer and starts off rocky and, to my eyes, not very promising, the rocks looking like they get tumbled about and rearranged each time there's a big storm. Much of the upper section of the stream was layered with newly fallen leaves. In this photo is looks like a series of puddles.

Further down I found more of a flood plain, a flat muddy area with its own scrubby vegetation rather than the hillside trees growing almost right down to the water, and the creek carving out a channel through softer sediment.

So, here's the salamander I found. 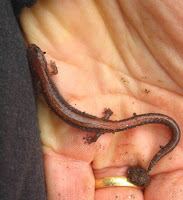 Yup, it's a redback (Plethodon cinereus). Followers of this blog might wonder, "just one?" That's what I wondered; I've been finding dozens of them lately in the Mt. Moriah cemetery.

I guess with just one I could focus on its interesting details. Fall into winter is breeding season for red backs, and this male showed two bumps coming down from its upper lip, enlarged naso-labial glands. Salamander foreplay involves the male rubbing his lip and chin (where there's another of these glands) all over the female to turn her on, and presumably some secretions from these glands help get her in the mood. 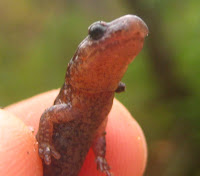 I haven't read a childrens picture book about toads in a long time, but if you asked me to draw one of the illustrations I'd put the toad next to a log, at the top of a burrow. Thus I got a nice little giggle out of finding this crotchety-looking (it was cloudy and chilly - 51 degrees) American toad (Bufo americanus) on the other side of a rotting log, just at the head of its burrow.

Posted by Bernard Brown at 6:45 AM No comments: