I'm getting a lot of questions about my finger. I've got my left pinkie buddy taped to its neighbor to let the sprain heal - something I wasn't even going to bother with until I got to work and realized that I actually do use my left pinkie a lot to type (shift).

My otherwise most expendable finger took the brunt of a slip and fall on a damp, slippery talus slope on a recent timber rattlesnake (Crotalus horridus) trip to the mountains.

The weather called for cloudy with a chance of rain. I bet on the kind of cloudy that the sun can poke through, yielding that warm haze that brings the snakes out for long basking sessions. What I got was a fog that slicked the rocks and made for tricky hiking on the steep slope.

One of the benefits of damp weather is that it brings out the efts. These are an immature terrestrial phase of the red-spotted newt (Notopthalmus viridescens). Like almost all our amphibians they avoid the hard glare of hot sun, but a rain or otherwise damp weather can bring them out to slowly walk through the woods. 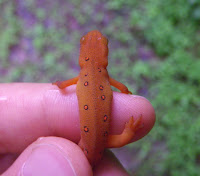 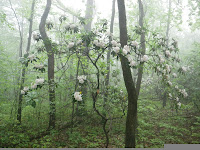 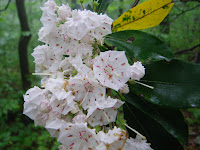 I got to the specific rocks where I hoped to find snakes, but the clouds thoroughly blanketed the sun, and I had little to do but peek under the rocks I could pick up.

What do you know? I found a snake. It's not a rattler, rather a highly squirmy ringneck snake (Diadophis punctatus). Oddly enough I found one of its prey species, a slimy salamander (Plethodon glutinosis) one rock over. 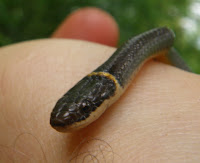 I hiked down the slope, I hiked up the slope, I hiked back and forth on the slope, and nary a rattler did I see. I don't know how many times I slipped and caught myself, but I fell once, and got back to the first patch of rocks (where I found the ringneck) feeling battered and rejected by the mountain.

Then I heard it. The slide was one of those sounds so soft that I couldn't quite tell if I was imagining it, but I looked towards where I thought it was coming from and saw this: 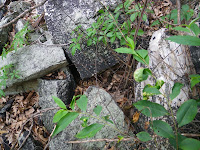 It's hard to make out, but that's a timber rattler shifting position next to its basking buddy (hiding buddy in this instance) under a rock. 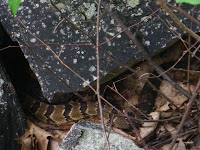 The finger hurts a little still, but I think it was a good trade.
Posted by Bernard Brown at 5:00 AM No comments: