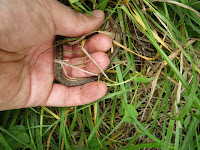 The garter snake and I were at an impasse. I had a grip on the back half of the snake, while he was thoroughly tangled with the grass to the point that pulling him out would have meant ripping out the entire clump of grass while trying not to rip him in half. That's putting it a little strongly, but I decided to take a quick shot of the section of snake I did have in hand, and to do the noble thing and let him go after that.

The herping gods smiled on that decision, and a second later when I flipped the piece of aluminum siding I had guessed he was headed for, there he was, strong and healthy enough to give me a strong garter snake greeting of teeth and feces (and musk, of course). 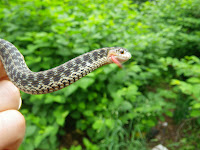 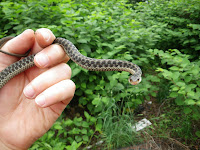 I had decided on a quick trip out to my beloved Mt. Moriah cemetery. There are still mountains of debris on top of where I usually find brown snakes: hard-to-flip nail-studded boards tangled in piles that would take a day to move, and then where would I put them?

The cemetery looked as overgrown as always... 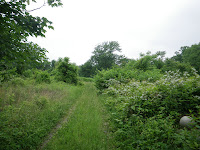 ...though it now featured this chilling bit of trash: a pink pet carrier with a mid-sized carnivore skeleton inside. 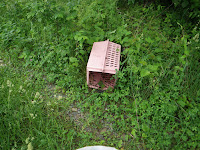 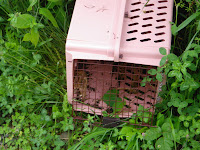 I try to take hope in that the door was open. I will assume that the critter was already dead when the carrier was dumped in the cemetery.

Now powerfully motivated to find something cheerfully alive, I cut down this path (yes, there is a path in the middle of all that Japanese knotweed)... 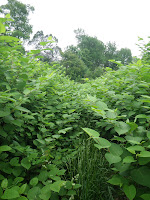 ...to flip the garter. I quickly flipped one more, a chunkier female getting ready to shed her skin. 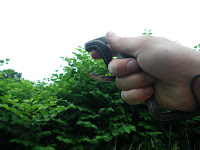 Posted by Bernard Brown at 6:06 AM No comments: