I had almost forgotten what it was like to see a timber rattlesnake (Crotalus horridus). I stepped slowly and very carefully through the trees and briars to the first talus slope, hoping I could tell snake from stone and shadow, that my eyes would pick out a snake before I spooked it. If I spooked it I hoped I could hear it sliding before it got away completely.

A lot of stone and shadow into my hike I finally heard the first snake, the slow rustling slide of a heavy timber rattler making its way over the rocks. I stared towards where I thought the sound was coming from, but it took me a moment to pick the snake out, just about as it gave me a quick warning rattle.

I backed off and the snake, stretched out as though crawling right to left, paused another moment and continued picking its way rock to rock as I took some photos.

A few hundred yards away I scrambled up another talus slope, hopping from boulder to boulder. I wanted to see if anyone was hanging out around a couple rocks that are popular with the gravid females in the summer - we call them rookery sites.

See the rattler? I didn't either. She was rattling something fierce, though, and after a bit of staring I made out some black scales amid the shadows inside this little thicket. 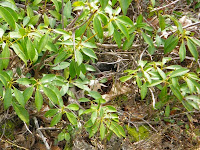 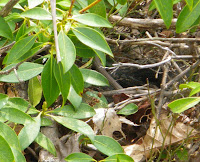 I left her alone and spied out this other rattler basking more openly. 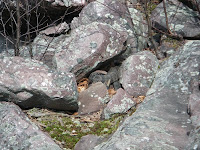 I was on my way to a meeting that afternoon, and with sun peaking in the sky I needed to head back. A black rattler greeted me near where I had seen the first one crawling (looked a lot like the first one, but the blotch pattern is a little different)... 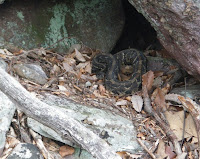 ... and as I made my way off that slope and neared another patch of rocks I don't think of as being quite so snakey, I saw this beauty hanging out. 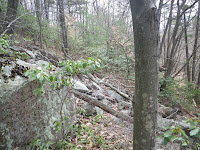 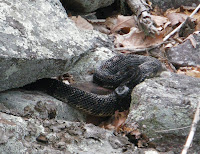 Here are a few non-snakes. First, this pool lower on the hillside hosted a bunch of amphibian egg masses, I think mostly spotted salamander (Ambystoma maculatum) and wood frog (Rana sylvatica), but maybe some Jefferson's salamander eggs (Ambystoma jeffersonianum). This was a couple weeks ago, but still several weeks behind our early amphibians.

Here's something else that lives around the rocks (moss and lichen): 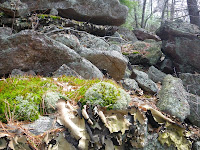 Last up, this one is for Ted MacRea of Beetles in the Bush, a six-spotted tiger beetle basking on a boulder. These are usually more skittish than basking map turtles - five steps ahead any time I want a shot of that crazily bright green bug on the trail - so I took advantage of the beetle calmly taking some sun. 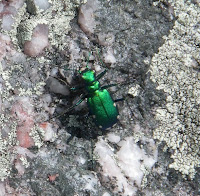 My friend, birder, environmental educator, and friend of skinks everywhere Tony Croasdale asked me to come along with him on a visit to the Heinz National Wildlife Refuge with a busload of high school students, and I didn't hesitate to say yes.

Tony coordinates an after-school environmental education program (and a summer 'junior docent' program for which he's raising money right now) that connects kids at urban public high schools in Philadelphia with nature, right in some of our wildest places.

In past work Tony had drummed up donations of binoculars, so every kid got a pair and got to spy up their own swallows (barn and tree), ospreys, and yellow warblers. About the ospreys, we even got to see one snatch up a decent sized carp from the Impoundment at the Refuge.

I was there for turtle IDs, and we did spot some big ol' redbellies (Pseudemys rubriventris), painted turtles (Chrysemys picta) and a few of those invasive red-eared sliders (Trachemys scripta).

Back near the refuge I pointed out a green frog on a log (Rana clamitans): 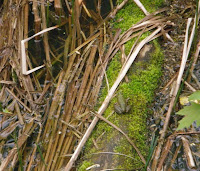 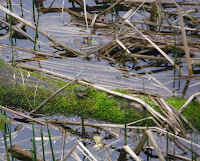 The kids were engaged, interested, and seemed to learn a good bit about birds, turtles, and the marsh.

I'll close with another appeal for support for that summer program. In full disclosure I'm on the board of the Cobbs Creek Community Environmental Education Center, and federal funding cuts have endangered our junior docent/junior naturalist program, where we train high school kids to be environmental leaders and guides in the Cobbs Creek section of Fairmont Park. Tony's spearheading the fundraising effort to keep the program alive, and you can help us out by donating here: http://www.indiegogo.com/Cobbs-Creek-Junior-Naturalists
Posted by Bernard Brown at 4:59 PM No comments:

Every year I try to find another spotted turtle population (Clemmys guttata). I look at the maps and satellite images, do a little scouting over the winter, and then see if they're there like I expect them to be in the spring.

This year's spot was in the Pine Barrens. There are probably decent spotted turtle populations all over the Pine Barrens, but so far I haven't looked for them there - part of my overall anti-Pine-Barrens bias I suppose.

Our herping buddy Frank (a.k.a. Obi Frank Kenobi) told me once that he found a pine snake (Pituophis melanoleucus) at a spot I herped a lot when I first moved up here - 2005-2006. Frank has been herping since before I was born, so there might not be pine snakes there anymore, but I thought I might as well take a look around and get a feel for the terrain.

I couldn't hunt both pine snakes and spotted turtles at the same time. Spotted turtles are creatures of shallow water; pine snakes prowl and tunnel beneath the upland sands of the Barrens. They are also best found in different weather: spotted turtles tend to be morning people and are hard to find once it gets hot, while we, at least, tend to find pine snakes crawling around in warmer weather.

So I started off with the spotted turtle hunt. I tromped and slogged my way through the flooded forest fringing a creek and found no spotties. I did see a ton of dead Japanese stiltgrass. 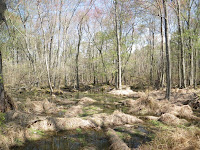 I'm not sure if spotted turtles don't like the stuff - its an invasive exotic weed that tends to choke out everything else - but I think of it as the sign of a degraded landscape, and I saw no spotties there. I did see some wood frogs (Rana sylvatica)... ...as well as the season's first box turtle (Terrapene carolina) sitting pretty on an island in the marsh. 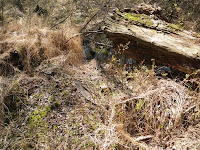 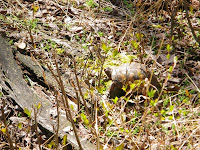 As a rule, box turtles make a trip. If you find a box turtle, the trip is not a failure and you have not wasted your time driving all that distance, burning all that gasoline, slogging and hacking all those miles. I looked the scared guy over and rubbed my hands over the warm, rough shell to trigger the release of some more endorphins (mine of course) before I put him down. 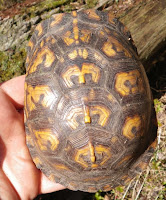 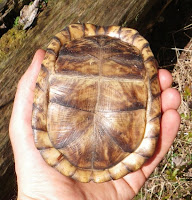 After a couple hours I headed uphill and worked back to the car on the sand. 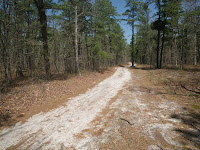 I met a pair of fence lizards (Sceloporus undulatus) sitting in a hollow tree. 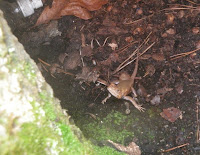 They ran out when I looked more closely. Here's the big girl up on the trunk doing her best squirrel imitation (trying to stay on the other side of the tree). 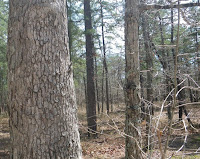 Here's the male, who actually stopped on the trunk and did some push ups that showed off his pretty blue belly and throat. 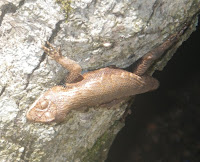 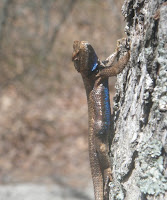 I saw no pine snakes, but check out this track under the sand. Pine snakes eat pocket gophers, and so seeing pocket gopher tracks is a nice sign.

It was over 70 degrees and the sun was shining hard when I took a quick detour into one last patch of marsh. I could see some bushes and tangled greenbriar from up on hill, and that was enough to pull me back down into the water.

And the water looked perfect. 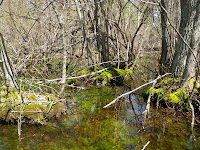 I even wrote "perfect water" in my notebook (I did not write 'perfect vegetation' as shrubs and vines - many of them with thorns - did their best to poke my eyes out and skin me), and then a couple steps later I watched a spotted turtle slide into the water.

I was elated. I did not catch the turtle (I tried, feeling around for a few minutes like a raccoon), I didn't see or catch another, but I was ecstatic to simply have found a turtle where I wanted to find a turtle.