I do not keep a life list. I don't track which species I haven't found and then specifically seek them out (this is common among birders and, to a lesser extent, herpers). I usually say mean things about life listers, but this time I'll refrain from casting stones; I get plenty nutty in my own ways (ask me about my quest to find milksnakes - Lampropeltis triangulum - in Philadelphia).

Still, even without an official list I have felt the absence of wood turtles (Glyptemys insculpta) in my herping life. These are an iconic species of the Northeast, particularly in rocky streams in wooded hills and mountains - my favorite landscapes, and it's been a little strange that I have never seen any in all my wanderings.

Scott has been more broken up about this than I have. Scott LOVES wood turtles. He has a childish dedication to the species, spontaneously reciting "did you know" facts about them and expressing amazement at interesting behaviors, such as pounding on the ground to bring earthworms to the surface. He has consoled me for a few years now about my failure to find wood turtles, so he was delighted when Eitan and I emailed him with this beautiful find: 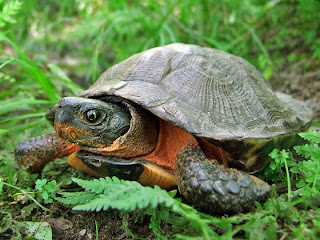 That photo is Eitan's. We were up near Forbidden Ridge (site of mind-blowing timber rattle snakes - Crotalus horridus) at a trash site Eitan had found, and on my way to a board in high grass near a seep, I looked to my left and saw a wood turtle just sitting there. 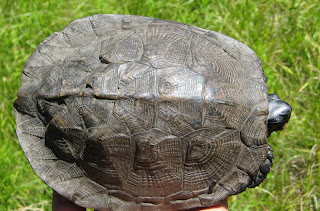 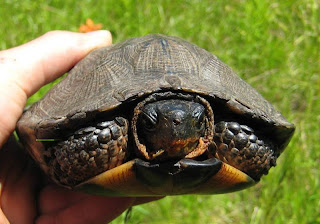 She really was a fabulous turtle. I wanted to play it super cool, like it was no big thing, but I can see why Scott gets so excited about wood turtles, and I can imagine targeting them more in the future.

Note the orange goo on the turtle's face. Like box turtles (Terrepene carolina) you often find (rather Scott often finds) wood turtles as or just after they've been eating worms, snails, and slugs - all slimy meals that are hard for a turtle to clean up after.

I should note that Eitan not only took a beautiful shot of that turtle, but that it took him 25 minutes. The turtle alternated between staying clammed up and then sprinting away, so Eitan expended a lot of patience to catch her just standing there. Scott, of course, knew all about this and later had some good recommendations for how to deal with wood turtle sprinting.

We also found some dusky salamanders under rocks in a seep - they look kind of like common duskies (Desmognathus fuscus) but the round, not-keeled tail is a characteristic of mountain duskies (D. ochrophaeus). 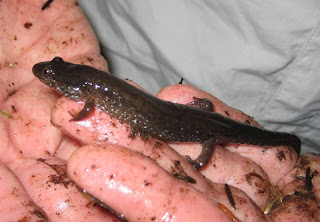 And now, almost as an afterthought (sorry), the rattlers. We found a heap of them back at the main spot on Forbidden Ridge. We assume these are gravid females, known to hang out together in particularly exposed areas, and indeed some of them were notably plump towards the rear. 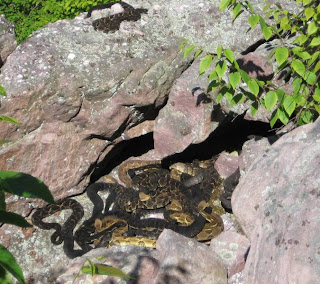 Here are a few down in a crack later in the morning once it had heated up a little: 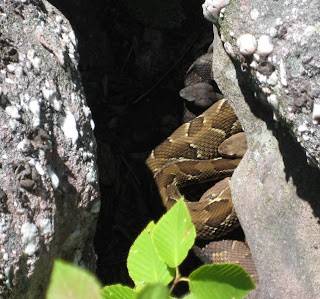 We found sheds at a couple spots where earlier we had seen live snakes. We destroyed the sheds, the better to hide the snakes from passers by who might kill them. 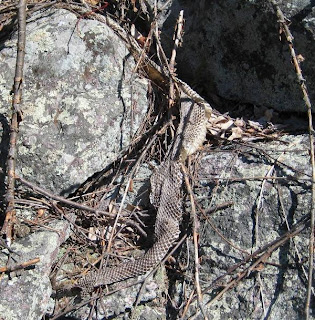 Here's a nice snake catching only a little bit of sun in partial shade. 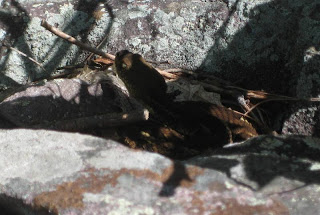 Quick follow up to the last post: On Sunday (July 12th) Scott and I tried another trip to catch map turtles (Graptemys geographica). Unfortunately some heavy rain the night before had washed a whole lot of silt into the river, making it impossible to see the bottom and thus impossible to properly hunt map turtles.

We did see an assortment of turtles in the Canal: one stinkpot (Sternotherus oderatus), one snapping turtle (Chelydra serpentina), and a few smaller map turtles.

We did find another hatchling - maybe the same one. 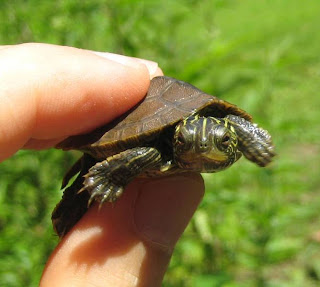 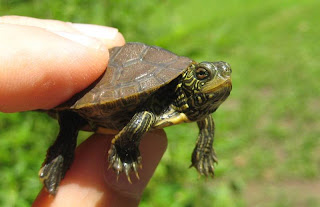 I decided to take a photo of one of several test holes. These are holes that nesting female turtles dig but for whatever reason do not end up using for egg laying. 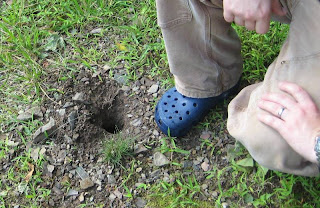 Last quick photo, here's a norther watersnake (Nerodia sipedon) we saw. The poor thing was swimming hard against the current and barely making any progress at all. 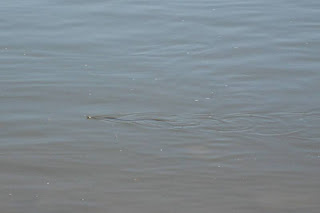 Post script: Eitan took a swing by the Delaware River recently and got some good photos of the map turtles. Here a close-up shot of one basking: 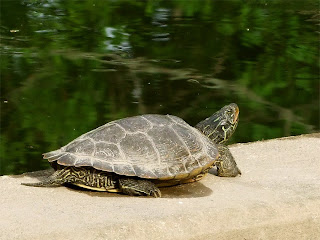 Here are a bunch basking on rocks - our targets in snorkeling: 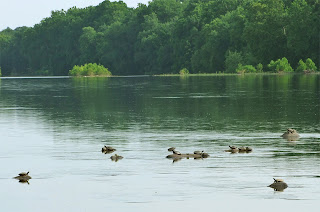 Posted by Bernard Brown at 2:19 PM No comments: