I’ve been going jogging in the Woodlands Cemetery for a couple years now, and I hadn’t found any snakes there until last week. Now I’ve found two. Both were under the same board, though on different weekends. I’ve checked this board probably twenty times. Has it just now decided it likes me?

The deer that hang out in the Woodlands are suspicious of me, I think. They jump up and run away when I get too close and then stand no less than thirty yards off watching me with their tails up in the air as I pass them. The squirrels, including the charcoal-gray melanistic one, don’t seem to pay much attention to me, and the robins also go about their business like I’m not there.

The plot of land the cemetery occupies dates back to the 1700s when it was an estate way out in the country. In the mid 1800s it was converted to a cemetery so people could get buried out in the country, but, by that point in the development of our transportation system, close enough for their families to visit. For a while it was quite a fashionable place to spend eternity. Several wealthy Philadelphians of the 19th century are there, as is Thomas Eakins, the famous painter.

Unlike its counterpart on the other side of West Philadelphia, the Mount Moriah Cemetery, the Woodlands is well cared for. There are no trash piles or fields overgrown with grass and weeds, and most of the graves have their headstones on straight.

Of course there is less for me to look under, so I have only looked while already there for walking or jogging.

It was quite a victory to find that first snake, a northern brown snake (Storeria d. dekayi), under that one board in the cemetery. It proved my suspicions correct. There are snakes in the Woodlands, dammit, even if they took me two years to find. I tried the board this Saturday morning, and this time it produced a hefty garter snake (Thamnophis s. sirtalis), which was a total surprise. The Schuylkill is not very far, I guess, but I was still shocked, since there is no water in sight, and garter snakes generally hang out where they can hunt frogs, fish, and tadpoles. I find them near the Wissahickon, along Cobbs Creek, at Tinicum – all near water.

This garter snake was a really chunky girl, and though she was dusky, when she puffed up she showed the most beautiful interstitial (between the scales) skin – marked with that bright, light green-blue that seems almost lit from within.

Of course I did not have my camera for either find. I have yet to come up with a comfortable way to go jogging with my camera.


I did have a camera for some more brown snakes from the vacant post-industrial lots up near 49th and Parkside.

I found several more brown snakes on a couple trips there on June 17th and June 22nd. On the 17th I headed over before a brunch date. I decided to check out some slightly smaller neighboring lots.

First I looked under some cover at the corner, and I found one under the very first rock. 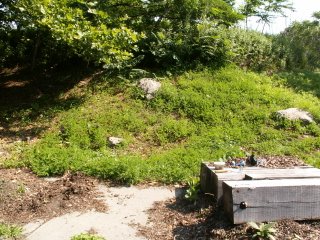 It wasn’t pretty, it wasn’t all that big, but I always get a kick out of finding something under the first rock I try. 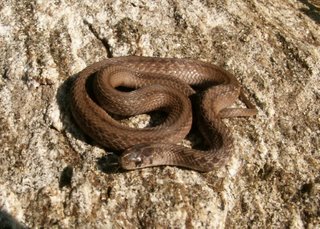 I wandered back past this equipment parked in a blocked-off street. 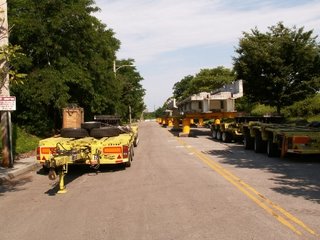 I have no idea what these are, but maybe they have something to do with the commercial buildings that are supposed to go up at 52nd and Jefferson.

I found no herps back here, but I did see some blackbirds. 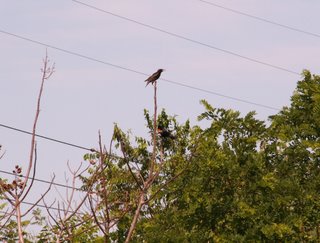 I also saw some orange ribbons in a couple of the lots, so I figure they’re slated for construction. I plan to go back and maybe relocate some snakes if I find them. 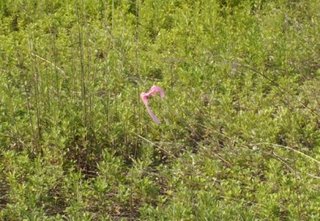 I checked some cans I had missed at that same corner. My sister had just called me to say Jen and I had an hour and a half to meet her in South Philly for brunch, but I had to get in just a few more pieces of cover before I got on my bike again.

I found two brown snakes under one of those cans. I only caught one of them. 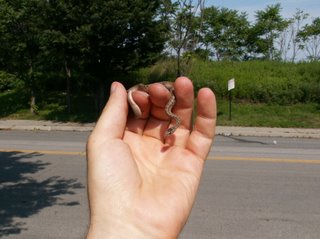 Right before I found those two snakes I had a pleasant interaction with the police. They had driven by me a few minutes before, and on their way back the other direction, the cruiser stopped and the window went down. I was worried I’d be cited for some kind of trespassing or something, but the officer in the passenger seat simply asked, “Are you catching bugs or something? We were just curious.” I said no and then explained herping. She gave me that blank nod that showed she was trying to be nice even though she thought I was nuts, she said goodbye, and she drove away.

Jen and I went back on the evening of June 23rd so I could take some more photos of the area and look for some earthworms while we were at it. We found no worms, but I did get this shot of rebar sticking out of the berm, just in case we forgot what is under all the grass and weeds. 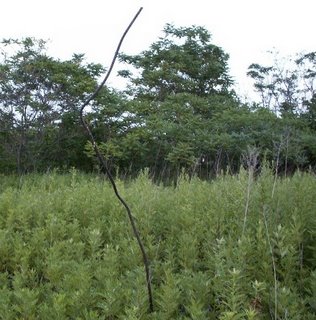 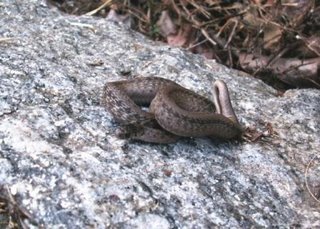 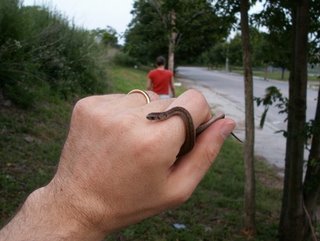 one dusky little guy under an old piece of rug (no photo), and one absolutely magnificent beauty, near bursting with developing babies and colored in chestnut on the sides and lighter taupe down the back.

Of course I didn’t get a good picture of the gorgeous one. I tried, but she wouldn’t sit still, and the light was fading. Here are two pictures. The first is my favorite. It is totally out of focus, but it gives the sense that she’s really zooming off that rock, her front half accelerating into hyperspeed. 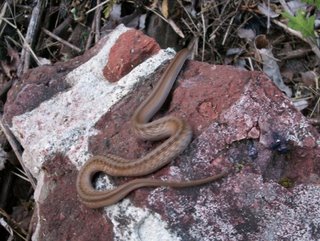 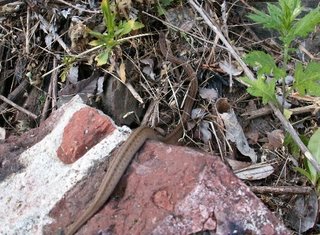 1 garter snake
Posted by Bernard Brown at 11:56 AM No comments: