We have rescheduled the February meeting we postponed due to snow (http://phillyherping.blogspot.com/2010_01_31_archive.html) to March 26th. It's the same time, same topic, same location.
Posted by Bernard Brown at 4:43 AM 3 comments:

For now, take advantage of the sunny days and see some turtles! Yesterday (March 7th) we returned with Scott, Caroline, and Miles to an old-favorite spot to see an old-favorite population of spotted turtles (Clemmys guttata). (note to non-herpers: I am being purposefully vague about the location. Spotted turtles are in decline in much of the Northeast, and even if they're common in some types of habitat, we're doing a fine job of getting rid of such habitat. Where they're common, they're at high risk from poaching - easy to catch and profitable to sell, so we're extremely cautious about discussing their locations, especially online.)

On Saturday Jen and I had run out to the Mt. Moriah cemetery and hadn't seen anything, just tracks left from voles that had tunneled under the now-melted snow:

It wasn't too early for the black rat snakes, or rather it should have been. Readers of this blog might already be familiar with my reverence for the region's greatest snake (I'm happy to defend that statement; bring it on), and so when Scott started hollering "Oh Billy! Come here!) I knew what he had found.

Then his voice took a turn for the disappointed. This is really strange, so I'll start with a photo: 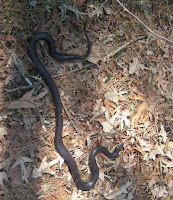 Blogger's crappy photo function keeps loading this sideways, but does that rat snake look dead to you? It didn't smell funny, it had plenty of muscle, and only one obvious wound:

That messed up eye didn't seem like enough to kill a snake, and we're still not sure what happened, just that at the time it felt like a powerfully ill omen to begin the herping season, especially given that the next find was an empty box turtle shell (Terrapene carolina).

...and finally, finally, Scott called out that he had found a spotted turtle. This little lady was basking next to a vernal pool before we rudely grabbed her, and in what could only have been a thoroughly terrifying experience, handed her off to a toddler. Here's Miles with the turtle: 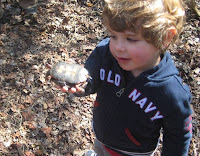 Here's the girl on her own, ready to get back to ground level again:

Here's what she did as soon as we put her down. Can't really blame her: 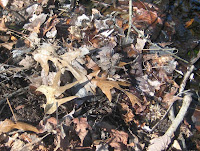 We walked around a while more; Jen, Caroline, and Miles headed back to the car to read the Sunday paper and bask in the sun (temps in the mid 50s - quite nice) while Scott and I tried two more pools.

One was empty of turtles, but the other... well, we stepped into the water, and Scott and I started seeing turtles at the same time. He saw one on a log; I saw one on the base of a tree:

Then we saw a little group of them hanging out on the base of another tree. Note how wet they are; I get the impression they were just climbing out of the water - relatively late for spotties, which are generally morning people.

Scott got his hands on three of them for some photos: 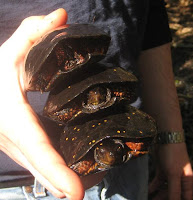 Here's one of the last patches of snow. Let's all point at it and make fun of it:

(Is it wrong to admit that last night I dreamed of timber rattlers - Crotalus horridus?)
Posted by Bernard Brown at 6:48 PM 2 comments: