A few weeks ago we took some friends looking for rattlesnakes (Crotalus horridus). The "we" included Jen, and although she's my life and herping partner, she hasn't yet come along on any big mountain trips, for the simple reason that we usually leave too early in the morning.

This time the weather called for clouds in the morning and sun in the afternoon. After a couple seasons of waiting for this kind of day to bring Jen along to look for my beloved rattlers, I had our day - we'd actually benefit from sleeping in.

So, after picking up Ruth and Patrick and stopping for donuts and coffee we were on our way. We got to the trail head and were on our way, with me promising that the cool, low blanket of clouds (enforcing temperatures in the mid 50s) would pass as we walked out to the spot.

The redback salamanders (Plethodon cinereus) under every rock were interesting to everyone but me, and this nice slimy salamander (Plethodon glutinosis) was a huge hit. 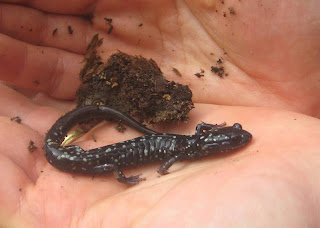 I was wrong, so we killed time eating lunch, hiking around doing hiking things. Eventually, after a spell of sitting around talking on a scenic outcropping, Jen hopped up and nearly stepped over this beauty: 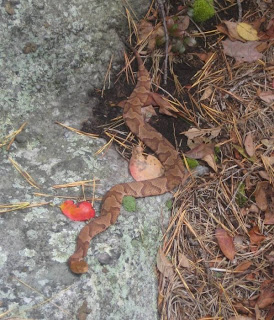 Copperheads (Agkistrodon contortrix) have perhaps the best camouflage on the planet. Put a copperhead on dry leaves on the forest floor and good luck finding it again. On a gray rock, however, they don't blend in so well. Don't tell the snake; it froze like its instincts told it to, even though that just made it an easy photo subject.

That copperhead was about all for the day. The sky never really cleared like I had hoped, but I'll take the pretty little pit viper. I've seen dozens of rattlers in PA, but I have a much, much harder time finding copperheads. I should bring Jen more often.
Posted by Bernard Brown at 3:39 AM No comments:

I hope you're not getting sick of timber rattlers (Crotalus horridus) yet. I know I'm not. I suppose I might think differently if I were doing this for a living (a hypothesis I'd be glad to test), but I'd be happy to go out hiking at least a few days a week to stare at our most majestic snakes in some of the most beautiful places in the state.

Last week I went back to Forbidden Ridge yet again, this time to find the hibernaculum. We've been watching pregnant females, and then the newborn babies, but we hadn't yet figured out where exactly all these snakes go when it gets cold. Timber rattlers hibernate communally in dens generally set in rocky, south-facing hillsides, so we knew there was a den back on that hillside somewhere.

We have hiked a lot of miles over that slope, dragging ourselves up and down, through rhododendron thickets and greenbriar curtains, over steep slopes of boulders and cliffs. Last week I hiked in a little late; to be precise I started right on time, but another route in proved harder than I had expected, landing me in position an hour later than I had hoped. The sun that day had started off shrouded by cloud and then played hide and seek. It was strong and steady when I arrived on scene, though, meaning that the snakes likely were already withdrawing into the shade where I'd have a hard time spotting them.

I started at the maternity ward, er, I mean the rookery site. As I had suspected there were still snakes there, but they were all out of sight and out of the sun. 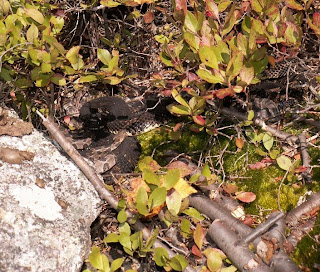 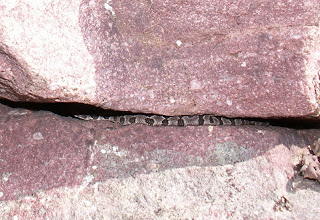 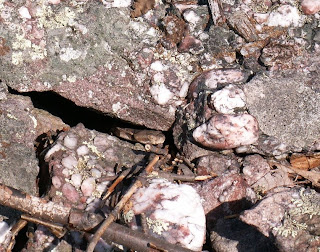 I figured this was yet another trip where I'd wouldn't find the hibernaculum, but I pressed on into the woods towards a talus slope I hadn't yet explored. I hiked up one side of the steep, rocky incline and then positioned myself at the top for a descent on my way down to the trail out and back to my car.

The rocks on this slope made me uncomfortable. Large boulders are relatively easy to traverse. Your foot step matters little to a rock that weighs a few tons. This slope was composed mostly of smaller pieces, unfortunately, so I stepped carefully but still felt several apparently safe footholds slide our or lever to the side beneath my boots.

Startled buzzing erupted just as I slipped on one such rock and skidded to an awkward stop another rock down. The thrill of finding the snake hit me at the same time as the jolt of fear that I didn't know where exactly it was for a moment - next to my ankle? Luckily I located the sound about a yard away and it was retreating. I didn't see the snake, but it was plenty indication that I needed to stop and look around.

Suddenly they were all around me. It's hard to describe this moment to someone who hasn't experienced it with at least some kind of cryptic animal. You look again at the rocks and now there are rattlers basking right there where you swear you had seen nothing a moment before. Two of them scooted out of view before I could extract my camera, but this yearling stayed put. 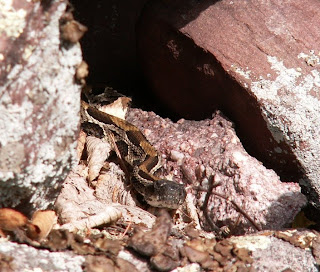 I took all the necessary readings and notes, and then figured I could happily cut back to the trail and go home. On my way out, though, about twenty yards from the first cluster of snakes, I looked to my side and say this guy: 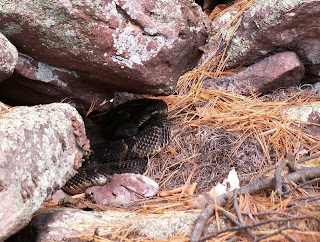 I took his portrait, giggling to myself with triumph and immense satisfaction, and then noticed two of his yellow buddies. See them arranged into a triangle with the black one at the bottom-right corner? 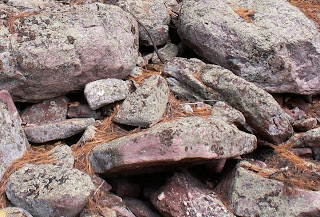 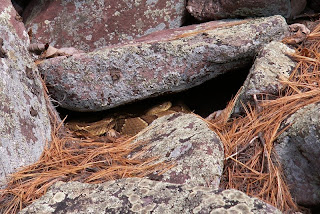 I got a step closer to the top one for a better shot and immediately noticed TWO MORE snakes back in the shade. 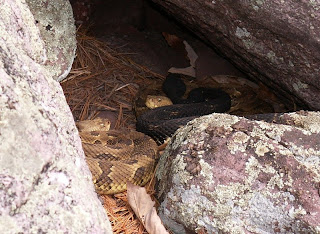 They were popping up all around me. Here's a baby a few more yards up the hill: 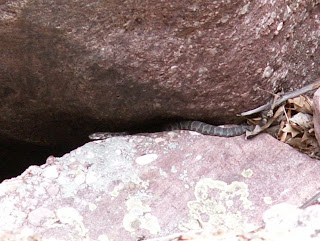 I looked to my left at one point and saw yet another snake, this one a black rattler in the shade of a rock, positioned so I could really only see it from that exact angle. 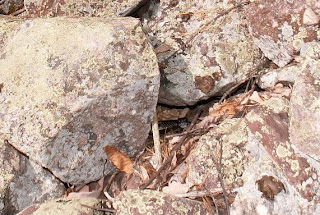 That one led to the completely sobering realization that nothing distinguished the rock sheltering that snake from the ones I was standing on or any of the rocks to which I could step from my position. I finished up the photo session and made my way back to the trail very, very carefully.
Posted by Bernard Brown at 3:51 AM 2 comments: