On Thursday (December 27th) I called Scott to see how his herping expedition with Josh to was going. “Did you bag your indigo snake yet?” I said, almost entirely joking.

Indigo snakes (Drymarchon corais) are one of the most highly-sought-after snakes on the continent. They are big snakes, growing to over eight feet, and beautiful at any size. Their name refers to their deep, shiny blue-black color, often highlighted with a rose chin and throat. Indigo snakes are also rare. They’re federally listed due to a combination of their demand in the pet trade and their basic incompatibility with human civilization – a large diurnal snake is an easy mark for anyone who wants to kill it, and with a range of several hundred acres, an adult indigo has to dodge a lot of traffic to survive. Finding an indigo snake will make your day if not your month (… if not your year).

Scott had invited me along on his Florida excursion sometime in early December, long after our plans had been set (and plane tickets bought, vacation arranged at work, etc.) to spend Christmas with Jen’s family in Scott has a habit of inviting me on trips when it’s too late for me to change plans to come along. This isn’t his fault; he frequently learns his work schedule a few weeks out, making long-range herping trip planning difficult. Still, it would have been nice to have been roaming , and as much as I was enjoying the holidays in , I was a little miffed at missing out on another expedition. So there were a few layers of meaning packed into my sarcastic, “Did you bag your indigo yet.”

I was talking to him on my cell phone in a movie theater lobby (we had just seen Charlie Wilson’s War – quite good) with mediocre reception, and so I didn’t quite understand his reply or believe the most likely interpretation of the crackling. I asked again, and he repeated what I thought he’d said: “Well yes, actually we did.” It was a young indigo at just three feet, but still Josh apparently jumped into Scott’s arms with joy. I sighed and recounted the previous day’s herping success in , which suddenly sounded pretty lame.

has been experiencing one of its worst droughts in history (this weekend’s weather will determine whether they beat their driest year on record), so I can’t be too grumpy about the rainy weather that kept me inside most of the time I was there. In fact the moisture probably helped us find the salamanders we did uncover.

We worked a couple streams in the section of the Chattahoochee National Recreation Area. It was partly cloudy and in the low 50s that afternoon, so we concentrated on stream-bed salamandering. We worked our way upstream and uphill in one stream flowing into a pond, and I figured we’d start seeing our familiar duskies (Desmognathus species) and two-lines (Eurycea species) once we hit the rockier stretches. 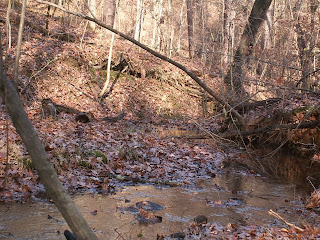 The first salamander we found was this half-grown lifer, a three-lined salamander (Eurycea guttolineata). These used to be considered a subspecies of our longtailed salamander (Eurycea longicaudata), and when grown up have a similarly slender build. I dig the bold black stripes and the silver and black mottling on the belly. 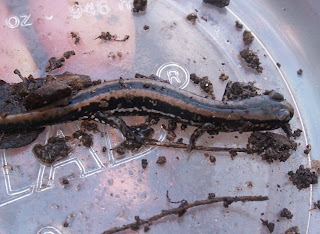 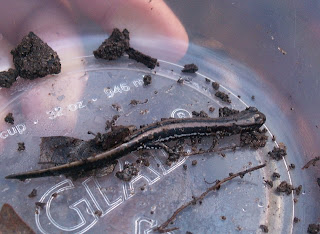 When I looked these guys up back home I learned they stick more to the flatter, boggier sections of streams instead of the rockier sections dominated by their two-line relatives, meaning my strategy was dead wrong and I probably would have found more downstream, not upstream. Jen soon flipped this tiny salamander, a baby slimy (Plethodon glutinosis) under a log just uphill from the bank. 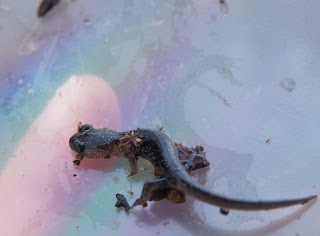 Jen had been to our second stream a week earlier (she had come down to before I did) and had reported large dusky-type salamanders. It only took a few minutes to catch two of these: 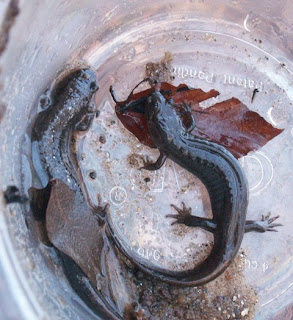 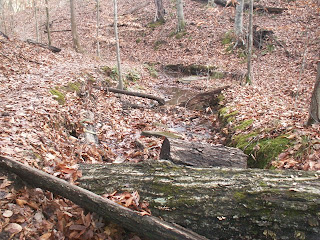 These were about five inches long and beefy. Their backs were a dark purplish gray/brown color with only a vague pattern, and their bellies looked to be a uniform medium gray. I had a similar experience IDing duskies in last year, and I’m pretty sure these are seal salamanders (Desmognathus monticola), since everything but the color is typical. Seal salamanders are supposed to have light backgrounds and distinct patterns with white bellies, but old individuals in the southern portion of their range (where we were) can get uniformly dark, including their bellies.

The last find was a DOR southern ringneck snake (Diadophis p. punctatus) we found walking back to our car. Late December is not when you usually expect to spot a snake, even a dead one, but it must have been run over just a couple days before.

This might be my last blog post of the year. I know other folks have been posting Best of 2007 posts, but I’m going to wait until the year is definitely over (and I’ll probably get in a New Years Day trip) and I’m stuck in a deep cold snap to assess and review the year.