Maybe my favorite moment of spring is when the maple trees bloom. It's easy to miss - there's a reason maples aren't thought of in the same terms as roses and lilacs - but at the end of March you'll see little bursts of color from the ends of the maple twigs. One day they're the same red buds you've been looking at all winter, the next they look like this: 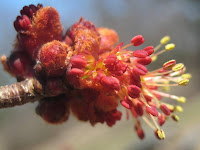 This time of spring belongs to the spotted turtle (Clemmys guttata), and we had some great luck over the last couple weeks at our favorite marsh in the tri-state area.

Sometimes you find one or two, and then sometimes you get super, extra lucky and find six in about a minute! (I took this photo of Jen with the stack just before number six - rest assured that we released all of them after cataloguing and photographing them individually) 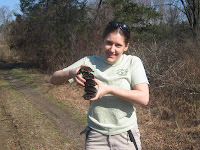 They were all hanging out in a grassy, marshy area, and in particular around a patch of rose briars surrounding a small dead tree. This must be some protection from predators (I know I tore my arms up grabbing them), and I suppose the network of roots and old root holes gives them some good nooks for escaping the winter.

A few days after that, Scott visited the same spot and saw some hot turtle action - in particular a male spotted turtle trying to get a female to see things his way. You might wonder about how spotted turtle males win over the objects of their affection. It isn't pretty to watch; they do it by incessant biting. It's hard to say whether this turns the females on or just wears them out, but the males follow the female, nipping at her legs, shell, and head.

We've been seeing some other turtles too. There are lots of painted turtles (Chrysemys picta) around. I'm always reminded of how slow spotted turtles are when I see and hear a pond full of painted turtles skitter, slide, and jump into the water as soon as I come into view. This one, however, was quite preoccupied by some lump of flesh (hard to tell what it once was) that she was gnawing at and let me get pretty close. 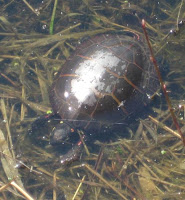